Please spread this as far as possible – I want to reach folks who are far outside the usual channels.

The Summary: Conditions are very, very good right now for easy, top-quality, final ingestion of original commercial Apple II Software and if you know people sitting on a pile of it or even if you have a small handful of boxes, please get in touch with me to arrange the disks to be imaged. apple@textfiles.com.

The rest of this entry says this in much longer, hopefully compelling fashion. 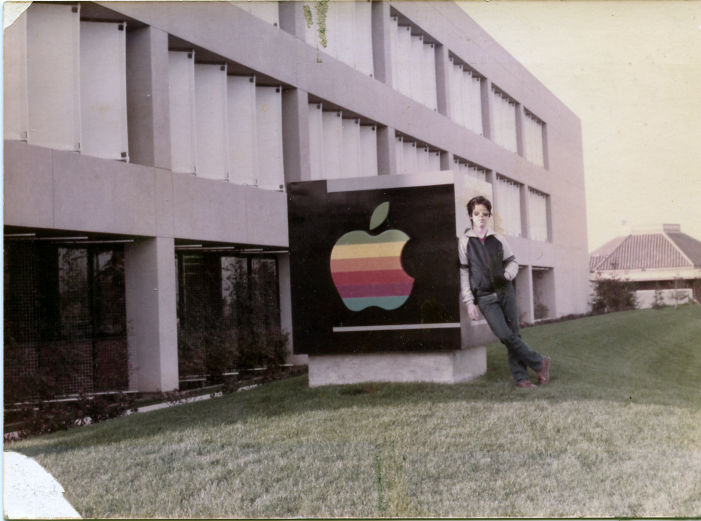 We are in a golden age for Apple II history capture.

For now, and it won’t last (because nothing lasts), an incredible amount of interest and effort and tools are all focused on acquiring Apple II software, especially educational and engineering software, and ensuring it lasts another generation and beyond. 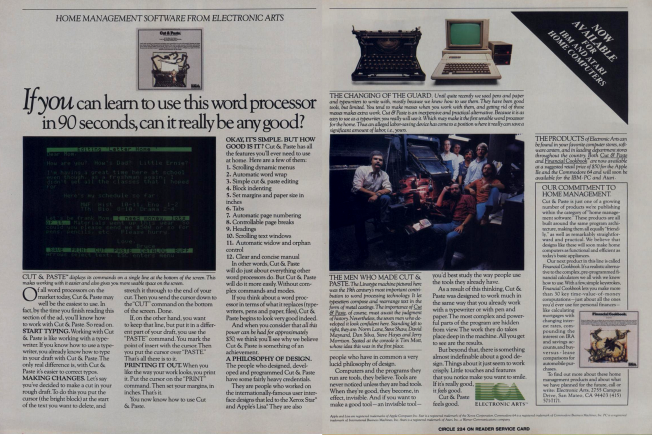 Copy protection, that method of messing up easy copying from floppy disks, turns out to have been very effective at doing what it is meant to do – slow down the duplication of materials so a few sales can eke by. For anything but the most compelling, most universally interesting software, copy protection did a very good job of ensuring that only the approved disks that went out the door are the remaining extant copies for a vast majority of titles.

As programmers and publishers laid logic bombs and coding traps and took the brilliance of watchmakers and used it to design alternative operating systems, they did so to ensure people wouldn’t take the time to actually make the effort to capture every single bit off the drive and do the intense and exacting work to make it easy to spread in a reproducible fashion. 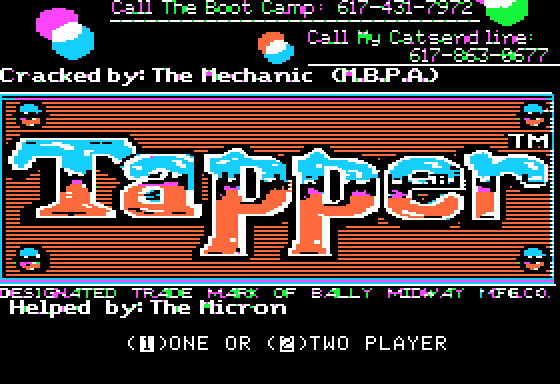 So, obviously it wasn’t 100% effective at stopping people from making copies of programs, or so many people who used the Apple II wouldn’t remember the games they played at school or at user-groups or downloaded from AE Lines and BBSes, with pirate group greetings and modified graphics.

What happened is that pirates and crackers did what was needed to break enough of the protection on high-demand programs (games, productivity) to make them work. They used special hardware modifications to “snapshot” memory and pull out a program. They traced the booting of the program by stepping through its code and then snipped out the clever tripwires that freaked out if something wasn’t right. They tied it up into a bow so that instead of a horrendous 140 kilobyte floppy, you could have a small 15 or 20 kilobyte program instead. They even put multiple cracked programs together on one disk so you could get a bunch of cool programs at once.

I have an entire section of TEXTFILES.COM dedicated to this art and craft.

And one could definitely argue that the programs (at least the popular ones) were “saved”. They persisted, they spread, they still exist in various forms.

And oh, the crack screens!

I love the crack screens, and put up a massive pile of them here. Let’s be clear about that – they’re a wonderful, special thing and the amount of love and effort that went into them (especially on the Commodore 64 platform) drove an art form (demoscene) that I really love and which still thrives to this day.

But these aren’t the original programs and disks, and in some cases, not the originals by a long shot. What people remember booting in the 1980s were often distant cousins to the floppies that were distributed inside the boxes, with the custom labels and the nice manuals. 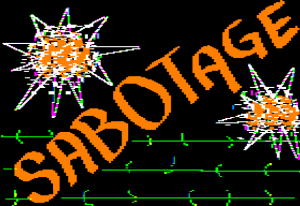 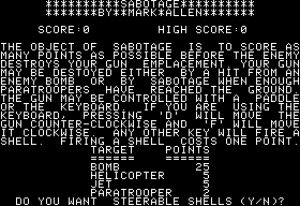 On the left is the title screen for Sabotage. It’s a little clunky and weird, but it’s also something almost nobody who played Sabotage back in the day ever saw; they only saw the instructions screen on the right. The reason for this is that there were two files on the disk, one for starting the title screen and then the game, and the other was the game. Whoever cracked it long ago only did the game file, leaving the rest as one might leave the shell of a nut.

I don’t think it’s terrible these exist! They’re art and history in their own right.

However… the mistake, which I completely understand making, is to see programs and versions of old Apple II software up on the Archive and say “It’s handled, we’re done here.” You might be someone with a small stack of Apple II software, newly acquired or decades old, and think you don’t have anything to contribute.

That’d be a huge error.

It’s a bad assumption because there’s a chance the original versions of these programs, unseen since they were sold, is sitting in your hands. It’s a version different than the one everyone thinks is “the” version. It’s precious, it’s rare, and it’s facing the darkness. 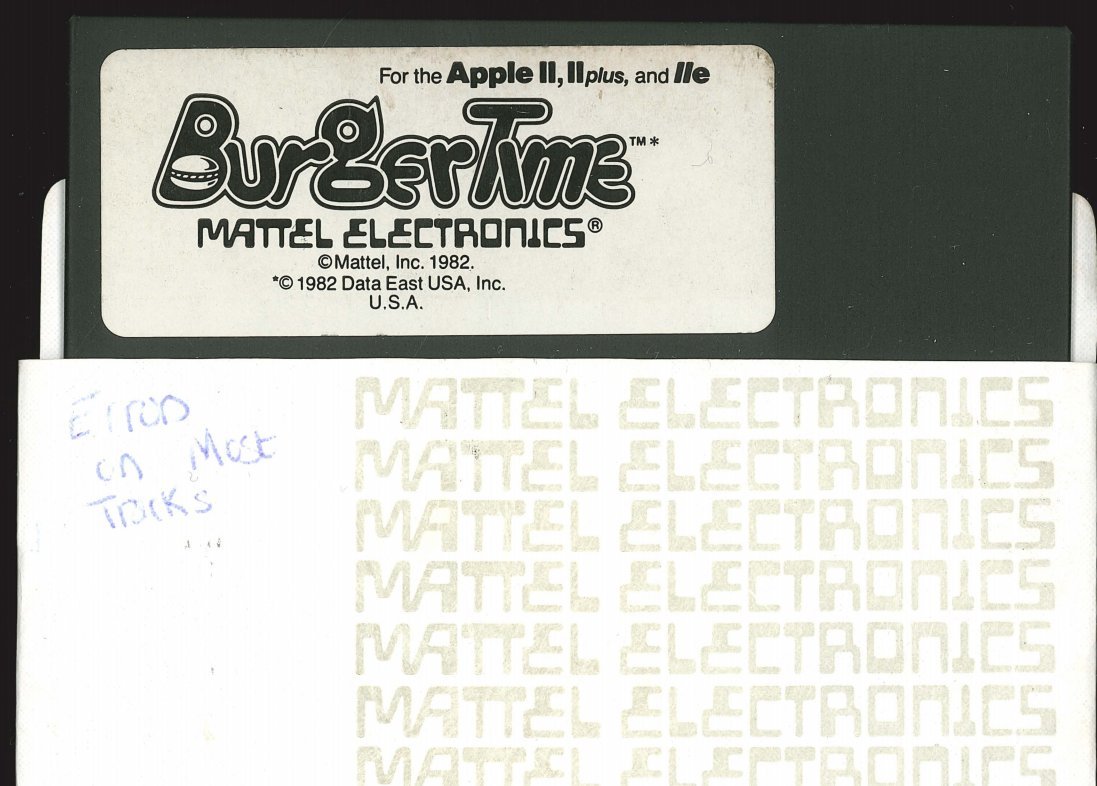 There is incredibly good news, however.

I’ve mentioned some of these folks before, but there is now a powerful allegiance of very talented developers and enthusiasts who have been pouring an enormous amount of skills into the preservation of Apple II software. You can debate if this is the best use of their (considerable) skills, but here we are.

They have been acquiring original commercial Apple II software from a variety of sources, including auctions, private collectors, and luck. They’ve been duplicating the originals on a bits level, then going in and “silent cracking” the software so that it can be played on an emulator or via the web emulation system I’ve been so hot on, and not have any change in operation, except for not failing due to copy protection.

With a “silent crack”, you don’t take the credit, you don’t make it about yourself – you just make it work, and work entirely like it did, without yanking out pieces of the code and program to make it smaller for transfer or to get rid of a section you don’t understand.

Most prominent of these is 4AM, who I have written about before. But there are others, and they’re all working together at the moment. 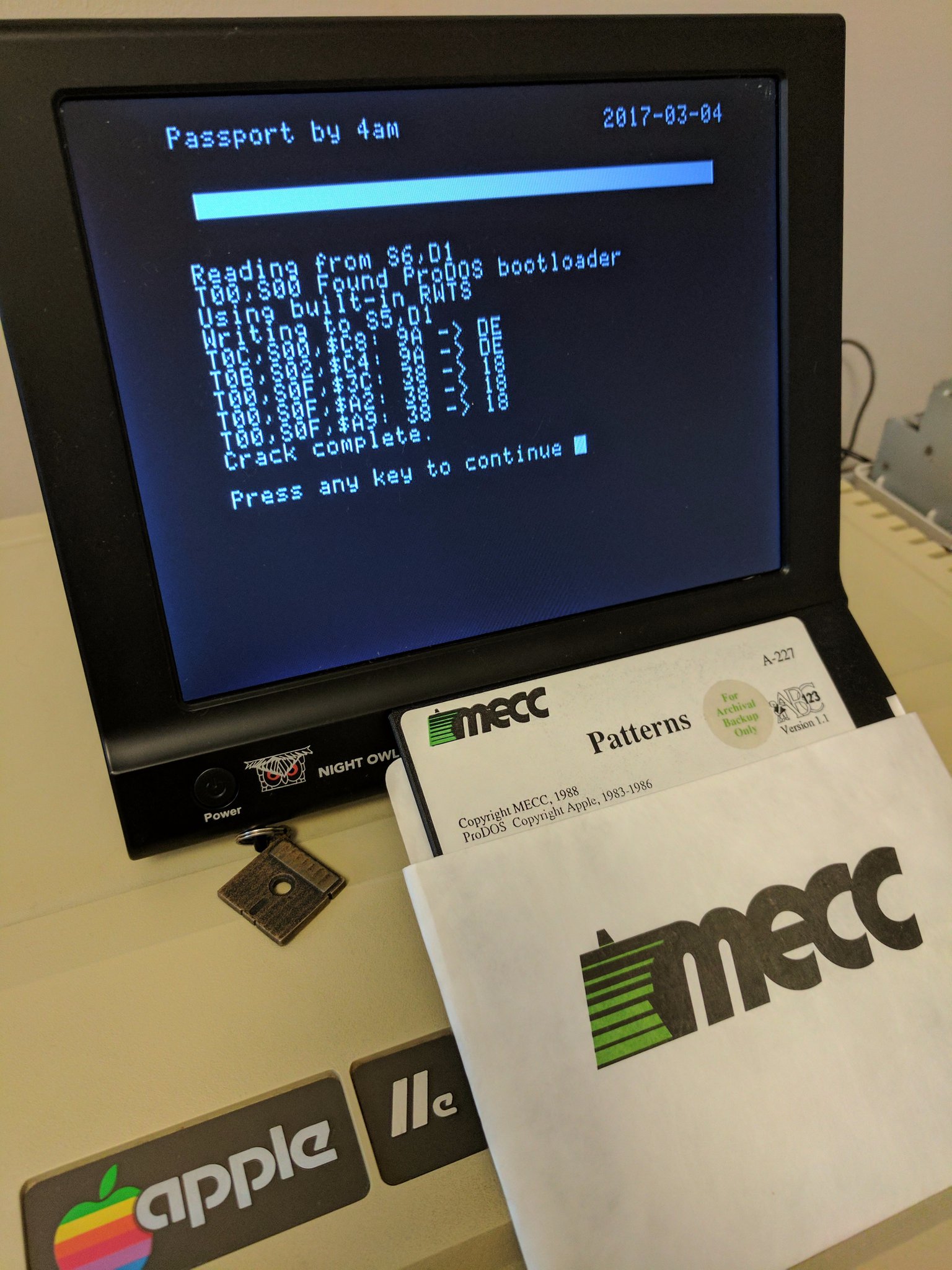 They’ve been developing tools from the ground up that are focused on silent cracks, of optimizing the process, of allowing dozens, sometimes hundreds of floppies to be evaluated automatically and reducing the workload. And they’re fast about it, especially when dealing with a particularly tough problem.

Take, for example, the efforts required to crack Pinball Construction Set, and marvel not just that it was done, but that a generous and open-minded article was written explaining exactly what was being done to achieve this.

This group can be handed a stack of floppies, image them, evaluate them, and find which have not yet been preserved in this fashion. 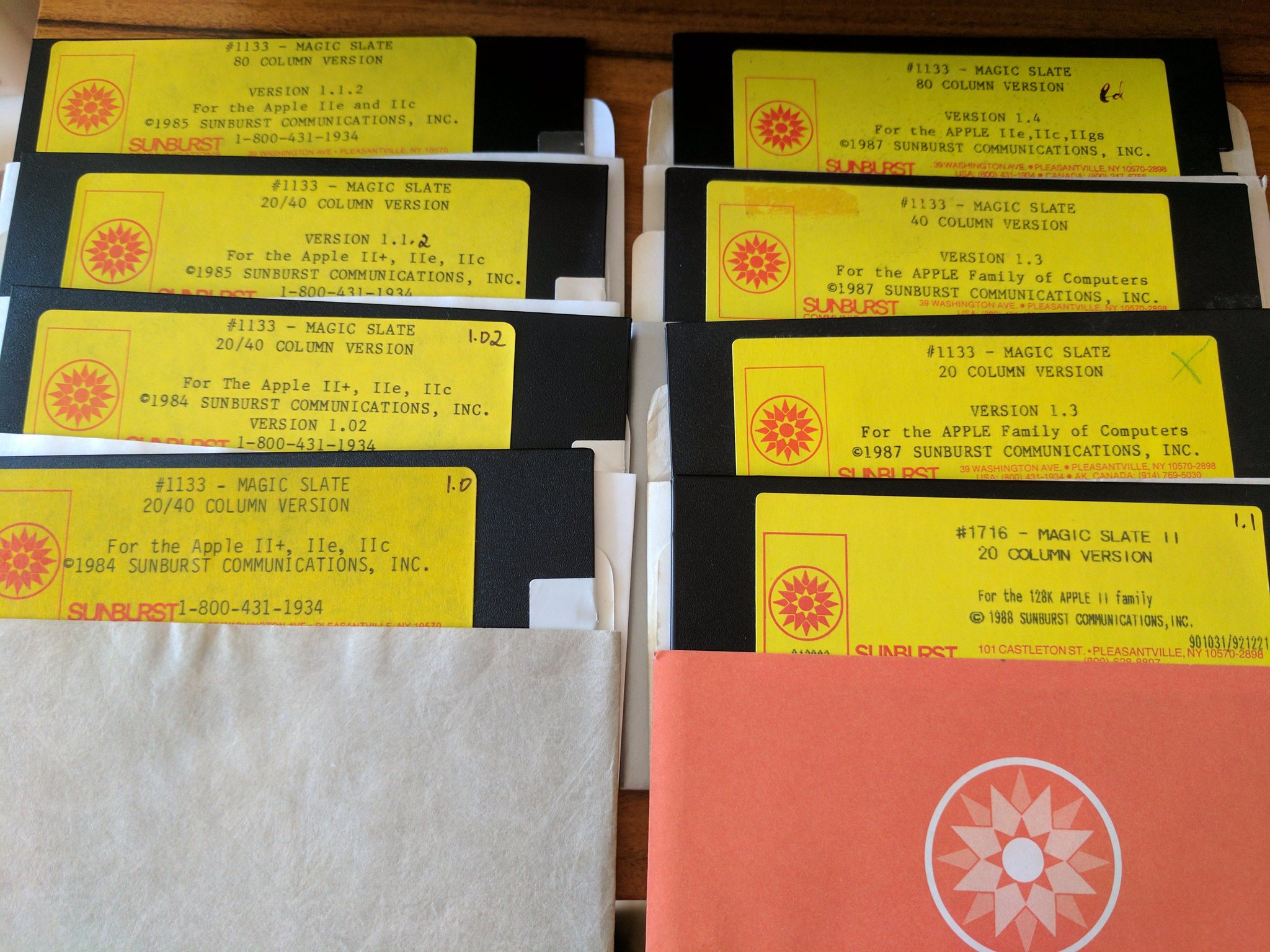 But there’s only one problem: They are starting to run out of floppies.

I should be clear that there’s plenty left in the current stack – hundreds of floppies are being processed. But I also have seen the effort chug along and we’ve been going through direct piles, then piles of friends, and then piles of friends of friends. We’ve had a few folks from outside the community bring stuff in, but those are way more scarce than they should be.

I’m working with a theory, you see.

My theory is that there are large collections of Apple II software out there. Maybe someone’s dad had a store long ago. Maybe someone took in boxes of programs over the years and they’re in the basement or attic. I think these folks are living outside the realm of the “Apple II Community” that currently exists (and which is a wonderful set of people, be clear). I’m talking about the difference between a fan club for surfboards and someone who has a massive set of surfboards because his dad used to run a shop and they’re all out in the barn.

A lot of what I do is put groups of people together and then step back to let the magic happen. This is a case where this amazingly talented group of people are currently a well-oiled machine – they help each other out, they are innovating along this line, and Apple II software is being captured in a world-class fashion, with no filtering being done because it’s some hot ware that everyone wants to play.

For example, piles and piles of educational software has returned from potential oblivion, because it’s about the preservation, not the title. Wonderfully done works are being brought back to life and are playable on the Internet Archive.

So like I said above, the message is this:

Conditions are very, very good right now for easy, top-quality, final ingestion of original commercial Apple II Software and if you know people sitting on a pile of it or even if you have a small handful of boxes, please get in touch with me to arrange the disks to be imaged. apple@textfiles.com.

I’ll go on podcasts or do interviews, or chat with folks on the phone, or trade lots of e-mails discussing details. This is a very special time, and I feel the moment to act is now. Alliances and communities like these do not last forever, and we’re in a peak moment of talent and technical landscape to really make a dent in what are likely acres of unpreserved titles.

It’s 4am and nearly morning for Apple II software.

It’d be nice to get it all before we wake up.