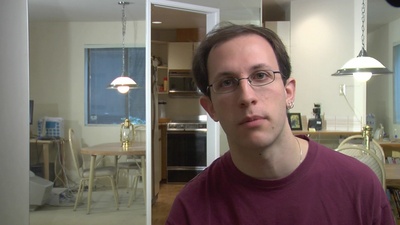 Just for the record, I’m just using this nice picture of Dan/Inky because it’s a representative resulting video screengrab. What I’m talking about doesn’t necessarily apply to his interview at all.

With the end of the shooting phase of GET LAMP, and combining it with my previous film, I have conducted something on the order of 300 interviews. I have interviewed people famous for something, infamous for something. People not famous for anything. People who are ashamed that this is all they were known for, people who have done nothing but define themselves by the subject being discussed. Some of my interviews have been overly friendly, while others have been bland or sad, and while none have been hostile or involuntary, I’ve had people say after the interview that they hate being interviewed and did it out of a sense of duty.

Through all this, I forged for myself techniques and observations in doing interviews, things I had to learn on the run and other things I sort of read about and kept in mind. Let me mention a few.

I am a horrible listener. Or, more accurately, I was. When I was very young I was rather a miserable person, and didn’t get along with most anybody. Why I didn’t move into arson I’ll never know, but I do know that when people showed an interest in me or at least a neutral regard, I talked to them much as a thirsty person sips water. Just the joy of being connected to someone via language meant I loved speaking at or near people when they’d let me, and this unfortunately grew to a habit of endless, withering monologues that could leave the most open-hearted and attentive person blindly pawing for a fork.

I recognized this enough to know that the biggest problem with doing a documentary with interviews in it would be to shut up. As a result, I started training. I had to actually train to shut up and listen. There’s a couple times in Michael Moore’s movies where you can hear him, off camera, absolutely poking someone with a verbal stick, having a conversation with them instead of conducting an interview. It can go the other way, too, with a person listening so much that there’s nothing for an interviewee to go on and they desperately lay out paragaph after meaningless paragraph, hoping some of this is usable. It can really go both ways, but I knew I was more of the conversation side of the coin than the silent side. I would ask people stuff about themselves, at parties, or hanging out, and then not say anything while they spoke. This was an effort. It was not how I was as a person at the time and it took months to try to undo some of that programming.

Oh, sure, I fail. In some of the interview recordings, I’m definitely having a conversation with the person or persons and not letting them go on. I got better, especially when I had to hear myself go on.

This said, there was definitely a case where I had to find myself speaking, and that’s when I was interviewing someone who really had no experience being asked things.

I pride myself on trying to find interview subjects that life hasn’t granted the platform to be heard. While some of the people I’ve interviewed can count the times they’ve been on camera by the hundred, others have me as their only video interview. While this might be because the person was a minor character, it was sometimes the case that nobody had really thought to ask, or no video documentary had ever been made that thought to include them.

And what would happen is they would speak, and then stop. And have nothing more to say. And I’d have traveled for some distance to see them, and a few extra minutes in any direction wouldn’t hurt, and so I would start to tell them a story. I have a lot of recordings of myself telling the same stories. But I wasn’t telling these stories because I needed to hear myself or because I thought it had to get on camera, but because I hoped the story would be a trigger. Let’s try one now.

When I was 18, I was really into They Might Be Giants, and I’d never seen them live, and here I was in college in Boston, at Emerson College, and I found out they were playing locally at the Paradise Rock Club. I decided I’d go, and I showed up so early, noon in fact, that there was nobody at the door. It was open, and I breezed right in, and found myself with the opening band doing a sound check. I’m walking around, marveling, when someone behind me asks where’s a good place to eat. It was John Linnell, one of the members of They Might Be Giants! I started to say something about fast food places, when John Flansburgh came by and said they found a place and off they went.

The story is true, but it’s also a huge pile of triggers. Boston, They Might Be Giants. The Paradise Rock Club. Emerson College, Sound Checks. Getting where you shouldn’t. Getting blown away by something. There’s all sorts of concepts and names in there, things that, if I was interviewing someone about Boston in the late 1980s, would set them off. THEY’d been to the Paradise back then. They remembered other clubs they’d been to. They remembered that time they were in the rain for an hour to get a glimpse of a band they loved. They might even remember the Rathskeller….

Stories help. It also helps to know who you’re interviewing.

Oh sure, you walk in there and you did the research and you know this is the guy who knows his stuff about playground equipment, and you’re going to interview him on that, but maybe, just maybe, a question about his favorite playground as a kid sets him off on an amazing emotional rant about what he loved about his early playschool days, an angle or side of his personality maybe never caught on film before. You have to be willing to switch on a dime – it’s not the facts you’re interviewing, it’s the person.

Sometimes you want to ask something that is going to change the tenor of the interview. Make it more uncomfortable. Work out a bad subject. Mention someone the person hates. To this day, I still turn off the camera and ask them how they feel about it, give them a minute or two to consider. This is a personal thing. I have a problem with getting into someone’s home or workplace and sucker-punching them. Sometimes, I feel like I am quite alone in that feeling.