I have so many people in my life from so many pursuits and situations that there’s no way I can remember everyone, and certainly don’t want to keep blasting paragraphs of text out to e-mail addresses, so I quickly put together this page for all the basic facts to be in one place.

I almost never talk about my day job; that’s intentional. I had bad experiences a very long time ago with my various online hobbies bumping up against employment, so I  always made it a point of not going into where I work, what I do (except in a roundabout way for interviews and articles about me) and on the whole, keep most of that life in the dark.  For companies I worked at a long time ago, I might utilize that to talk about history, but that’ll be so long ago it almost descends into myth and lore, not a problem.

So, I worked for a videogame company (Psygnosis) that then became a startup in the same space (Focus Studios) and then that all kind of fell apart (as startups often do) and then I went to work for a hosting company. That was in 1997. I worked there until late 1999, when I got an offer at ANOTHER startup, which I worked at for one year (this was HarvardNet; they’re gone now) and then I was offered great money to return to that previous company, now purchased by a new firm. And then that company got bought. Then that company sold it off. Along the way, the name changed roughly a dozen times.

So, on September 2nd, I was finally laid off from this firm, after about ten years of employment (although as mentioned, if you don’t count the “sabbatical”, it’s 13). The process was perfunctory, not entirely unexpected, and devoid of much in the way of drama. I’d wanted to move on to other things for a while, and I’m sure that came across on the job, and to be honest my joys in life were coming from other places than my cubicle.

My job description shifted over the years, but was, completely, the same tasks: be assigned a customer hosting with my company (anywhere from ten to two at a time) and do basically anything they wanted to. I found myself doing everything from building machines and running cables to setting up OSes and optimizing them. I’d take calls at all hours of the day and night, sometimes multiple calls a day. The record was 48 straight hours (!) and yet in other cases, I could interrupt the desk jockey calling me and tell him the two commands to type to make all things all right.

So while I was officially an “Admin”, I was really a concierge – someone who would be there for you and make things work out as you expected.

The guy who originally hired me, Patrick O’Malley, who remains a good friend, found it better to hire communicative people who could learn instead of know it alls who clouded their surroundings with odor and self-importance. And I think that philosophy worked out well – the engineers in my company were directly engaging with customers, not hidden away by salesmen and project managers at all costs. Anyone who’s seen my public speaking knows that dealing with people is one of my strengths, and knowing when to ask questions is another.

My heart, however, has become computer history, and technology culture, and all the realms of data preservation, observation and teaching that comes with it. I think that’s obvious too. It was inevitable, then, that a job that often had me in long wee hours trying to break down major issues into bite-sized pieces was soon eclipsed by another job that had me trying to break down history into understandable sized pieces. I’m happiest opening or stunning minds from a stage or letting the world lose on a new swath of rescued data. It’s where I feel my purpose.

I was making good money at this job, however, so I stuck around (not a great reason to, to be honest) and that funded a lot of other projects, trips and events. I gave a leg up to people who needed it, ate some awesome food, and did a fair bit of travel, all from the money made at this job. It was a good time.

But, nothing lasts forever and here I am. And now you know.

Well, I have a few projects in place that need my attention. That’s short term stuff, but it needs to be done. I just have more guilt-free time to do it.

But where would I like to be next, assuming I want employment?

Well, I’d like a place that was proud of my whole life, and not nervous about linking my name to their endeavor. I’d love to be at a place that made me do smaller hours and quality work than just throwing my body into a box with a chair in it for some outmoded ideas of how many hours consitute a job. I’d like, really, to make my job part of myself, instead of it being the part of myself I keep hidden away for job security and conflict avoidance reasons. Man, that’d be great.

So now I’m trying, as I hit my late 30s, to reinvent myself, live a life the way I want it to be lived, on all cylinders and fronts. I’m looking for not just a job, but the job. Here’s hoping. 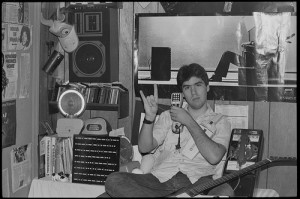