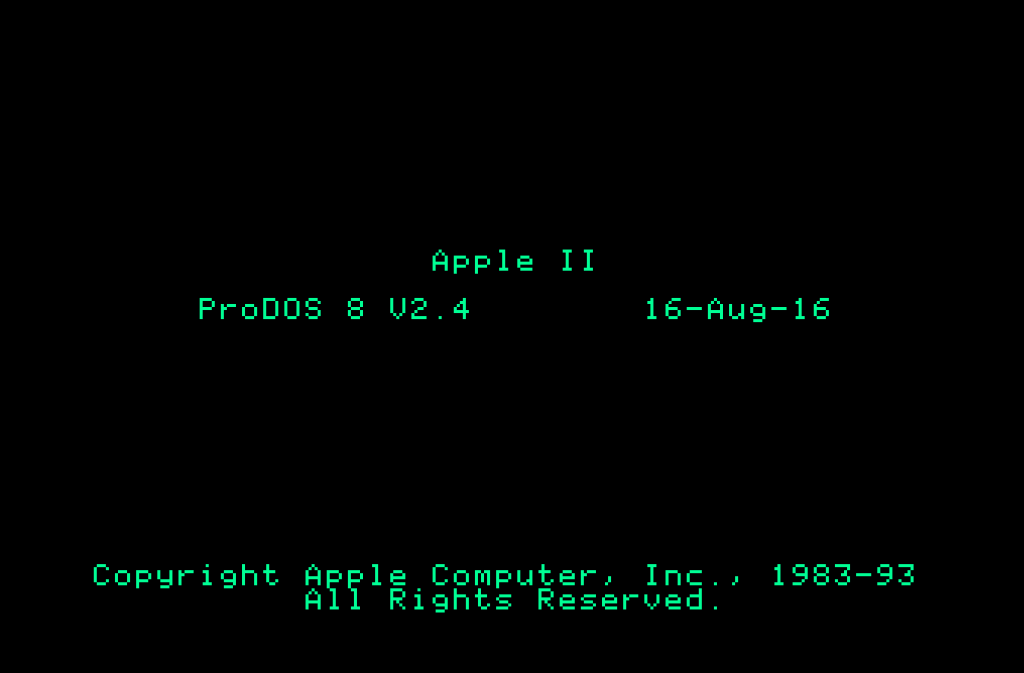 In September of 2016, a talented programmer released his own cooked update to a major company’s legacy operating system, purely because it needed to be done. A raft of new features, wrap-in programs, and bugfixes were included in this release, which I stress was done as a hobby project.

The project is understatement itself, simply called Prodos 2.4. It updates ProDOS, the last version of which, 2.0.3, was released in 1993.

You can download it, or boot it in an emulator on the webpage, here.

As an update unto itself, this item is a wonder – compatibility has been repaired for the entire Apple II line, from the first Apple II through to the Apple IIgs, as well as cases of various versions of 6502 CPUs (like the 65C02) or cases where newer cards have been installed in the Apple IIs for USB-connected/emulated drives. Important utilities related to disk transfer, disk inspection, and program selection have joined the image. The footprint is smaller, and it runs faster than its predecessor (a wonder in any case of OS upgrades).

The entire list of improvements, additions and fixes is on the Internet Archive page I put up. 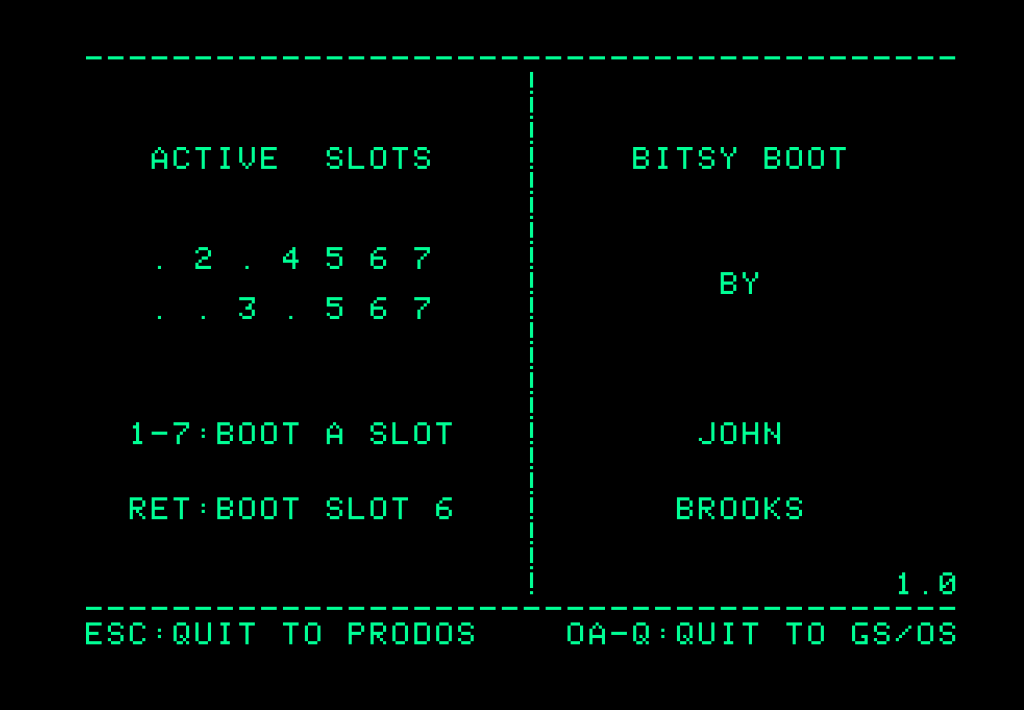 The reason I call this the most important operating system update of the year is multi-fold.

First, the pure unique experience of a 23-year-gap between upgrades means that you can see a rare example of what happens when a computer environment just sits tight for decades, with many eyes on it and many notes about how the experience can be improved, followed by someone driven enough to go through methodically and implement all those requests. The inclusion of the utilities on the disk means we also have the benefit of all the after-market improvements in functionality that the continuing users of the environment needed, all time-tested, and all wrapped in without disturbing the size of the operating system programs itself. It’s like a gold-star hall of fame of Apple II utilities packed into the OS they were inspired by.

This choreographed waltz of new and old is unique in itself.

Next is that this is an operating system upgrade free of commercial and marketing constraints and drives. Compared with, say, an iOS upgrade that trumpets the addition of a search function or blares out a proud announcement that they broke maps because Google kissed another boy at recess. Or Windows 10, the 1968 Democratic Convention Riot of Operating Systems, which was designed from the ground up to be compatible with a variety of mobile/tablet products that are on the way out, and which were shoved down the throats of current users with a cajoling, insulting methodology with misleading opt-out routes and freakier and freakier fake-countdowns.

The current mainstream OS environment is, frankly, horrifying, and to see a pure note, a trumpet of clear-minded attention to efficiency, functionality and improvement, stands in testament to the fact that it is still possible to achieve this, albeit a smaller, slower-moving target. Either way, it’s an inspiration. 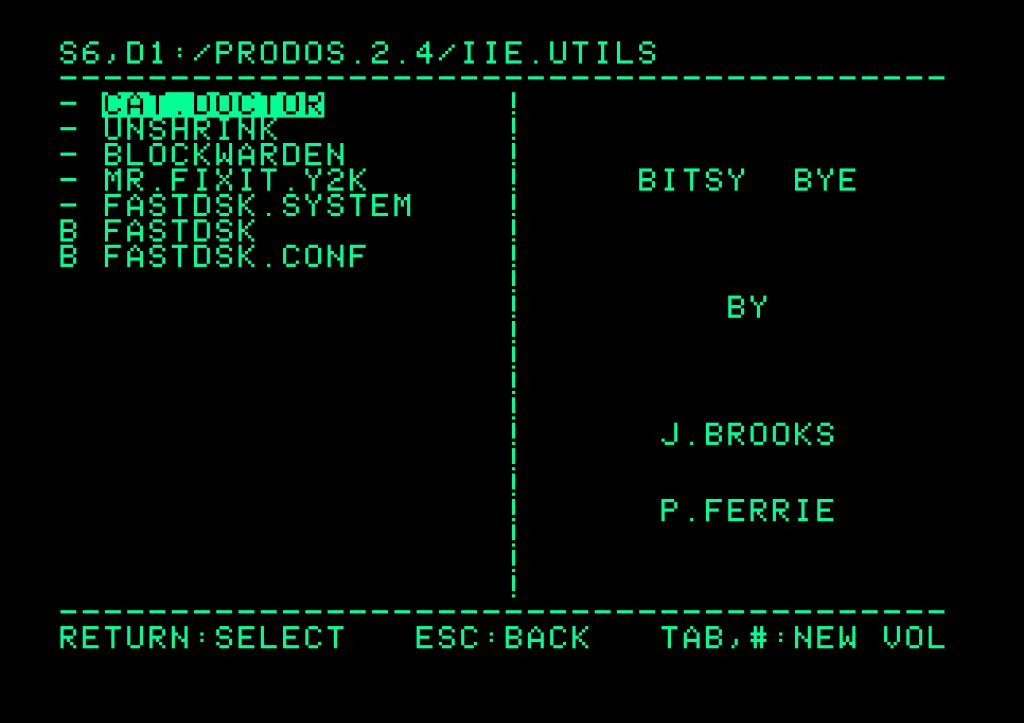 Last of all, this upgrade is a valentine not just to the community who makes use of this platform, but to the ideas of hacker improvement calling back decades before 1993. The amount of people this upgrade benefits is relatively small in the world – the number of folks still using Apple IIs is tiny enough that nearly everybody doing so either knows each other, or knows someone who knows everyone else. It is not a route to fame, or a resume point to get snapped up by a start-up, or a game of one-upsmanship shoddily slapped together to prove a point or drop a “beta” onto the end as a fig leaf against what could best be called a lab experiment gone off in the fridge. It is done for the sake of what it is – a tool that has been polished and made anew, so the near-extinct audience for it works to the best of their ability with a machine that, itself, is thought of as the last mass-marketed computer designed by a single individual.

That’s a very special day indeed, and I doubt the remainder of 2016 will top it, any more than I think the first 9 months have.

Thanks to John Brooks for the inspiration this release provides.