Here’s an update on the Infocom Cabinet, with a side order of ethical debate. 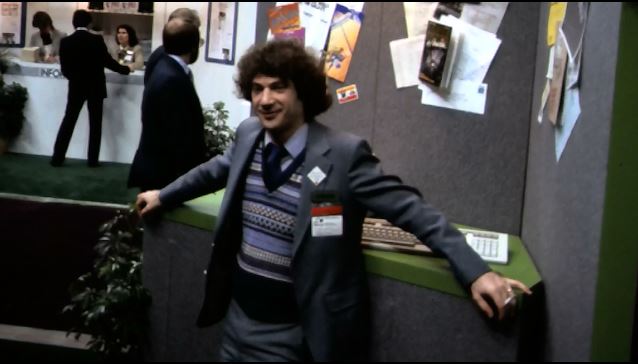 I’ve now dumped the balance of materials I have around into the Infocom Cabinet collection on the Internet Archive. There’s some scatterings left on my hard drives, but they are either 100% personal (think: pay stubs and employee evaluations) or they’re duplicated in many ways in what did go up.

So with this little update comes:

All told, we’re somewhere in the range north of 5,000 individual scanned pages in this uploaded collection. It’s worth it to note that this wasn’t even the full extent of Steve Meretzky’s file cabinet – this was just as much as I grabbed with a sense of “this needs to be saved” cross-purposed with “this will look good scrolling by in the final film”. There’s likely piles of interesting material in the collection, including all of Steve’s work with Boffo and Legend Entertainment, two companies he worked at after Infocom – I just had to call it at some point, or I’d probably be scanning to this day. I again note that Stanford University was donated the entire Meretzky collection, where it sits safely to this day.

For the “what about” crowd… yes, there’s a few other items in the collection, and I may put them up if it makes sense to, but this should really be enough for anyone to produce a reasonably informed opinion on the goings-on, from nearly day one through to the office closing and all the remaining items shipped away, of Infocom, Inc., 1983-1989. They’re readable in the browser, and the original scans that are up are all 600dpi, meaning they can be zoomed in for artistic meaningfulness, which as a documentary film guy I’m pretty big on. It’s a triumph! People are talking about it! It’s making waves! 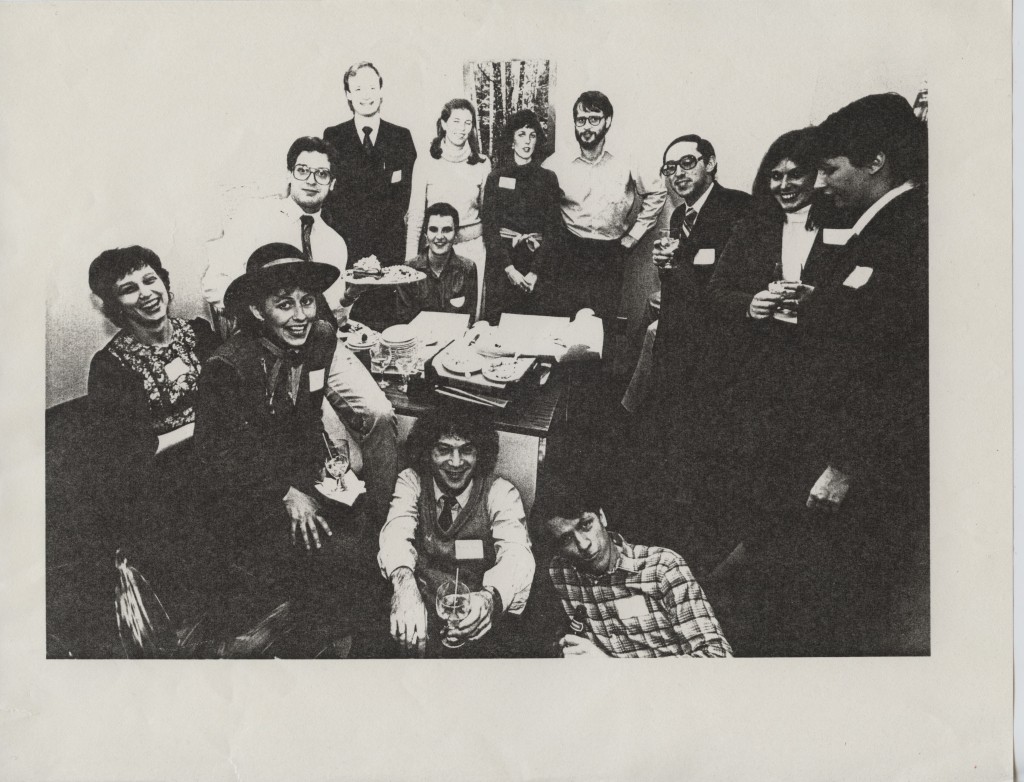 So, there’s an important factor in this. The vast, vast majority of Infocom employees are very much alive, some still working in the games industry, and others who have possibly not thought about the words “Zork”, “Infocom”, or “55 Wheeler Street” for a very long time. And now, out of nowhere, related to no particular anniversary or event, the sum total of the company’s materials are now online somewhere, browsable, and thousands of people are poring over them, studying and commenting.

Some will be delighted. Some will be confused why anyone cares so much, and maybe one or two will be in some ways horrified or nervous, especially if they haven’t gone over what’s been posted themselves.

For the film, I interacted with a variety of Infocom staff, some of them for just one day (interview), some just over a single phone call (saying they wouldn’t be in the film), and others on and off for years. I can’t pretend to call myself their friend beyond the Meretzky family and especially Steve, who I spent a large amount of time with during production and who I occasionally see when I’m in California.

There’s a situation in making a documentary I call “Stop-Motion Interaction” where you interview someone, spend 3 years working on the movie, and then either have the person at the premiere or run into them, and you have been spending months inside your head getting to know the person from what they talked about, and then you see them and to them, you’re just this old dim memory and to you, you’re seeing an old friend again. It can be jarring for both parties.

But there were people I didn’t get the opportunity to talk with at all. They literally have nothing to know about me or my methods or what I’m about, beyond I made some sort of film and that film had an Infocom aspect to it. (Some Infocom alumni just called GET LAMP “The Infocom Movie”, presuming that’s what it’d be about.) For some of them, they will likely see what just happened with all this documentation and have a “reaction”. 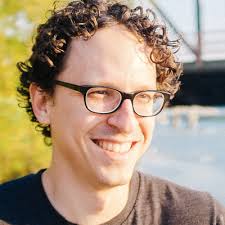 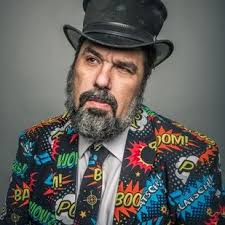 This gets enormously complicated. And painful. But if I’m going to talk about where I got to with releasing all this historical information, and to stand as some sort of example of the issues involved, I gotta go here.

It’s explained in excruciating detail in this podcast, so I’ll go with the Cliffs Notes version, like someone explaining why one shoulder blade is 2 inches higher than the other, and why there’s a scar going from one ear to the forehead.

Besides this treasure trove of infocom documentation in Steve’s basement, I had someone contact me saying, basically, “So, you’re working on this movie. Would you like The Infocom Drive?” Like everything else, I said YES without needing any details because that’s how I roll. When the Infocom Drive arrived (a roughly 150mb .zip), it was essentially a snapshot of Infocom at the end of days, Knowing that this was a goldmine that needed to be in some way preserved, I gave three copies away to trusted sources, and one of them wrote an article about a particular narrative thread in the drive’s contents, got a ton of attention, some extremely angry ex-Infocom folks (both privately and public, to me), my movie almost died in the cradle and I didn’t talk to the author for about six years.

Again, the podcast goes into this whole thing for the sake of the looky-loos, but I’m trying to get to the core of the discussion/debate here – that to tell this narrative thread, this article used e-mails, entirely private, pulled from the hard drive and which were never, ever published anywhere and I’m sure the employees on both sides of each letter had no idea their writings survived and just imagine waking up to that nightmare scenario.

Reconciliation did happen, and I did have conversations with a lot of people about it, and I definitely still harbor both the sadness at the initial event and the lost opportunities of six years of potential collaboration.

So then, what exactly am I doing here? 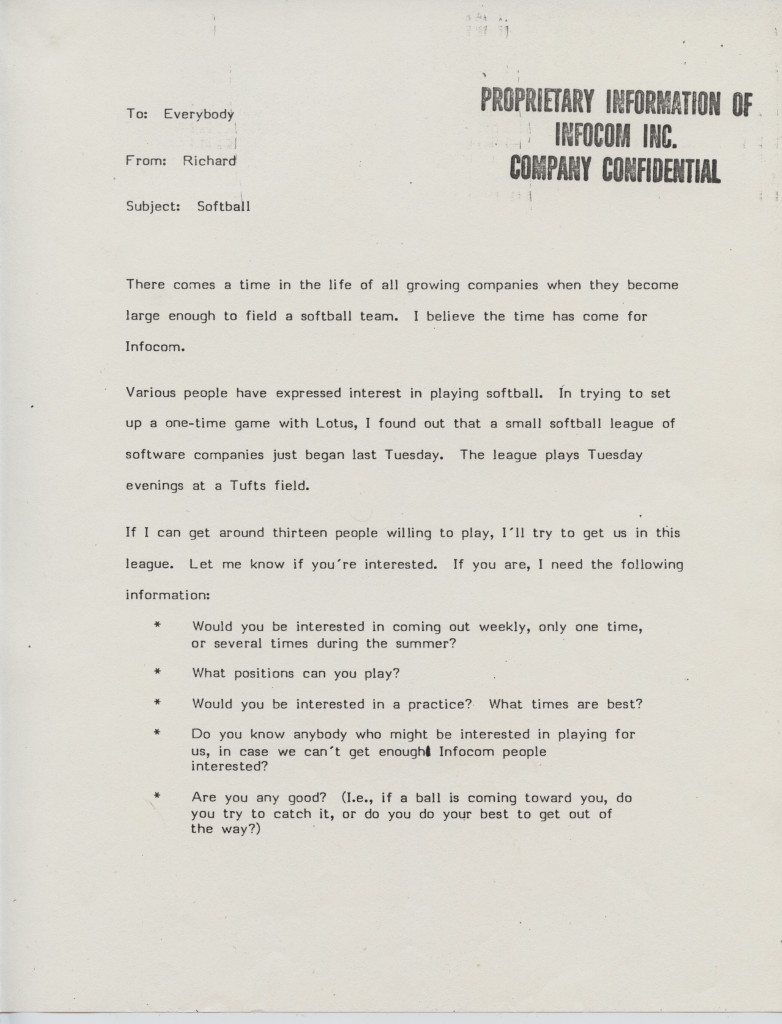 First, I tried to take lessons from the debacle of a half-decade-plus ago and implement them in a way that would protect people:

Steve has been rather open with how he does his work, so there are things in there that I wouldn’t do if I hadn’t worked things out with Steve and gotten his opinion on what’s acceptable. For example, I left in a salary listing for Steve just because it’s both historically interesting and because I think if he had it on his computer, he’d make it part of a presentation at GDC. But only Steve gets that treatment in any way.

I worry about someone defending decisions made decades ago, with 20/20 hindsight applied by groupthink hive-mind perfection-oriented knowledge. I hope that doesn’t happen. People in this group range from early 20s to early 30s (with a few noted exceptions) and Infocom was often either their first job, or a completely crazy 90 degree change in career. They did what they did, and it came from competence and doing the right thing as they saw it. I don’t know if any of us could stand up to such scrutiny and get top marks across the board.

Beyond this, though, there’s the situation itself.

This is probably going to be the only time, outside of maybe Sierra and Broderbund, that this level of depth of the life cycle of a game company will ever end up online. And while I know there are archives of some game companies, I don’t believe any had the meticulousness that Steve showed in gathering up company work and management product and placing them into perfectly boxed-up folders indicating what aspect of the firm they were. We literally have the memos introducing the start of the sales team, company library and health insurance… and then the “we’re not doing so well”, the resignation letters, the calls to sell furniture and office supplies. It’s all in there. 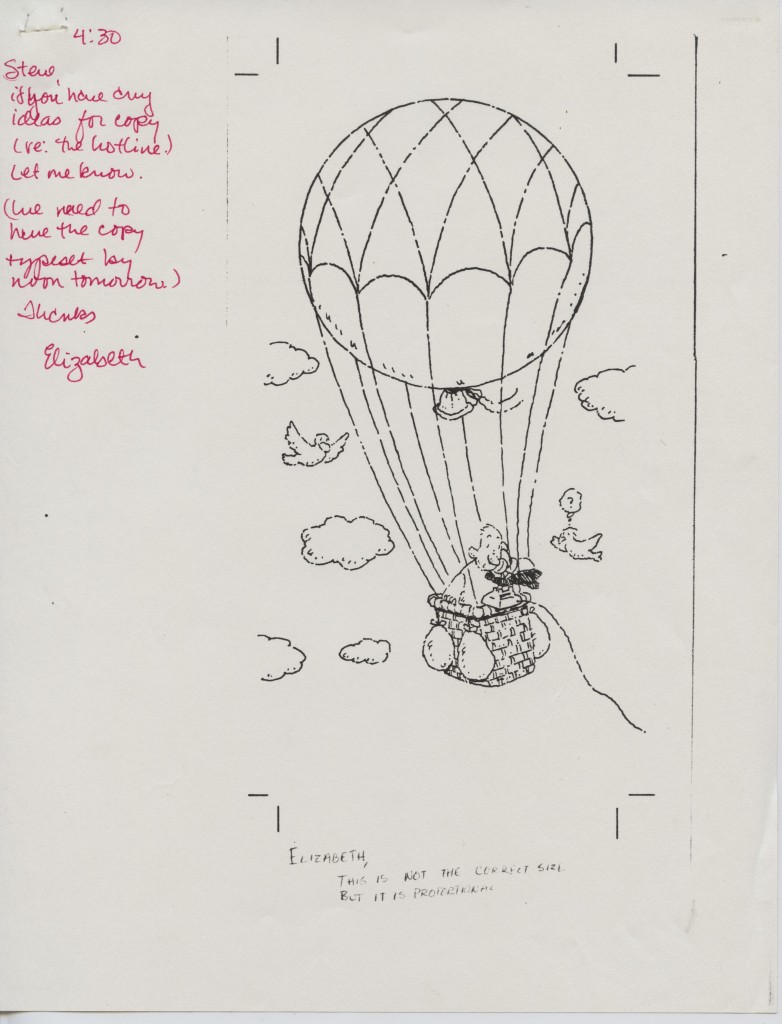 It is my strongest belief that this collection will instruct, inform and change things in games, if only to show what situations have persisted for years, and what aspects are evolved from how things were. It’s hard, cold source material, unprettified and unsummarized, and showing something else: Just how fucking amazing Infocom was.

These were good people. Hardworking employees, creative geniuses, and driven towards the goal of being the best of the game companies. A place that people dreamed of being part of from the outside. A company that stood as doing all the right things, until it wasn’t doing the right things. A chance for people to figure out where the cracks showed, where the triumphs were, and where dreams were actually and truly formed and hewed on a daily basis. That’s pretty amazing.

Infocom alumni can e-mail me (jason@textfiles.com) any time if they have concerns about something, or which I overlooked the nature of (I tried to be very careful about this and all the thousands of pages have been vetted by me personally – the buck stops here.) Naturally, the world at large can e-mail me too.

I should rush to say that the reaction on the part of everyone I’ve found has been 100% positive. I’m writing this not because someone complained, but because I saw in a potential scenario that angry and betrayed researcher I was so long ago with my friend (who is still, again, very much my friend) Andy. I know that the result is often not shouting but seething. That solves nothing. I wanted to get ahead of it.

For everyone else, please enjoy this rare and possibly unique peering into what is, ultimately, one of the high holy grails of gaming history.