One of my buddies Kizzle threw me an e-mail in which he said “Phreaking Comic Book” and a URL to a discussion on the Binary Revolutions Forum about said book. Naturally, I was interested – Kizzle knows me well.

In point of fact, the discussion on the forum was started by the comic book’s creator, Ed Piskor. His eagerness for feedback and input about his project was palpable, but I ignored that; what mattered was where I could see it. He had a link for where to buy it so I bought my standard 3 copies of it (archival, personal, demonstrative) and waited for it. Piskor contacted me himself, actually, quite happy that I’d ordered it, and the three copies were waiting for me after my holiday vacation.

First, let me say: Piskor’s the Real Deal. He’s got the art training, the experience making comic books, and the obvious energy to finish what he started. In the context of the sort of world I run in with regards to anything with the words “Phone Phreak” buried in it, completion is the exception and not the rule. He started a comic book in which phone phreaking and hacking would be center stage, and damn if he didn’t finish it. His energy, in fact, was so compelling that I simply assumed he was a teenager. Doing later research on him and finding he was years out of school and had done artwork for American Splendor was a surprise – not because he doesn’t draw well (he does), but because he talks and writes like that guy at the diner at a hacker con who is so fucking happy to share all this great stuff he’s been working on. Refreshing.

But a person is not their creations, so let me talk a little about this Phreaking Comic Book, Wizzywig, which just came out and is available here.

The history that interests me personally, that is, the line of phone phreaking and hacking rising up from about the 1960s to the present day, is a malleable thing. It concerns a lot of rather strange people, twists and turns quite a lot, and has been harvested a number of occasions, usually to great amounts of incompetence and teeth-grinding hyperbole. It is a very compelling thing to think of an 11 year old with a backwards hat making a satellite fall out of the sky with a small electronics box he made out of a Speak & Spell wrapped in wire. It is very compelling, but it is not true, not based on any reality, the sort of thing that people afraid of technology use as a reason to either ignore technology or mistreat those who do understand it. This has happened a lot.

It does not happen here.

Piskor did a very risky thing in this, the first of a series of books; he cooked a stew. A very delicious stew.

A stew is a great way to rejuvenate old, tired flavors, or known entities. Mix in the familiar, stir it with the new, and produce something both comfortingly reassuring but exciting. Here’s some beef, here’s some vegetables, here’s some spices. Piskor does this with hacker history/mythology, and in doing so he deftly weaves and bobs around any of the standard pitchforks and sharp sticks of the potential reading audience of his work. And yet, one can say, this is inaccurate because not only does his stew sit happily with those who helped make the ingredients he uses, but it could really appeal to anyone who has never quite lived what the characters lived. For this alone, it is a wild success.

The book concerns the story of one Kevin Phenicle, hacker extraordinaire and feared/admired figure. Starting with a montage of opinions about this character, who sits sadly inside a jail, we then travel back in time to formative events and experiences that helped make him what he is. Bullied by peers, clever with his (over the phone) social skills, awkward with girls. An incredible mind, stifled by the restrictions of home and age, seizing power and worth from technology and in the interlocking systems he finds ready for exploitation. A very compelling set of vignettes come out, all around his interactions with his machines and the occasional friend. One of these friends, calling himself Winston Smith, is a 90-degree shift from Kevin; political, more engaged with girls, a social hellraiser only somewhat curious about technology but more interested in the systems that exploit the technology to the detriment of society. He is the political to Kevin’s technical.

If this sounds familiar to a person who has been raised for years on hacker mythology, it should, Piskor has mined hacking history and thoughts to a very effective degree, but he does so by combining and remixing stories and real figures into new ones. Kevin Mitnick, Kevin Poulsen, Steve Wozniak and Jobs, Eric Corley, Ian Murphy… all of these people’s lives donate pieces of the stew. It reads, really, like a dream I might have; a reshuffling of “the canon” to accommodate a greater truth or two, mixed in with the narrative. Why care so much about these machines? What thrill is there in hacking? That’s what’s being told here.

Therefore, Piskor sidesteps the entire pathetic “ha ha, you got this minor detail wrong” game that breeds such distrust and contempt among people who recall a version of hacker history. He’s not thrown together another mistreatment like Hafner, Markoff, or Littman where specific details are closely enough recounted to make a casual reading audience unaware where the shortcuts are. All this work consists entirely of shortcuts! History has been condensed here, retold with a documentary-like feel, of a person who never existed, but has always existed. A teen too smart for his own good, making his own place in a world where what he can control is at odd with what controls him. That’s a universal situation with hackerdom and I’ve seen it many times. In that way, Wizzywig is a triumph.

Piskor’s website mentions an influence of Robert Crumb. He’s actually so influenced by him that a casual observer would easily mistake him for Crumb, flat out. This could be a negative, considering his voice is going through that specific filter, but it’s also a positive because Crumb’s style ain’t exactly a bad thing to be taking after. As I just said, it’s a documentary feel; all the frames are mostly straight-on shots, distanced from the characters, and the characters tend to be drawn with a sort of distance. It’s not for everyone, that style of comic, but it has a lot of things going for it – you never question what the most important part of the frame is, and you very quickly stop going “woah, nice drawing” and you just read it. I was able to polish this book off in less than an hour, and I think I got everything. There were details and injokes to reference in the margins and backgrounds to be sure; these are simple but not simplistic drawings.

Because of that journalistic style you quickly fall into the narrative itself, and Piskor has obviously composed Wizzywig from a collection of short stories. There’s no overarching theme as yet, and the story is definitely left unfinished, unwrapped, by the time you run out pages to read. This is expected of an item calling itself “Volume 1” and it’s clear from his plans to publish four of these that he thinks there’s a lot left to tell.

This is a fine work, and it is welcome on a shelf that has been sadly empty of historical fiction based on this time period and social scene I have spent so much of my life in. It is, as I said, delicious stew. 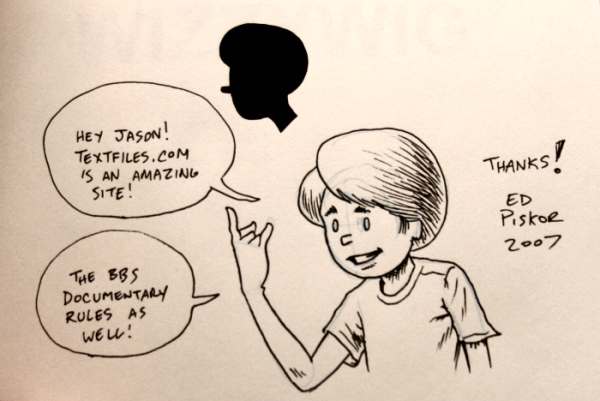