Permit me the indulgence of imploring the world to go play some games.

As mentioned previously, I have been working on a second documentary besides the text adventure movie GET LAMP. This second one is about arcades and is called Arcade: The Documentary.

My travels took me through Seattle (where I interviewed a developer of MAME, the Multi-Arcade Machine Emulator, as well as a refined collector of video games) and now place me in Las Vegas for the DEFCON convention (I am not speaking this year) and allow me to relax.

I found out a while ago that Las Vegas is home to a special place, the Pinball Hall of Fame. I assumed, like one might, that this Pinball Hall of Fame was a fixture in Las Vegas, kind of like a famous restaurant in a city or a beloved park in a state. A long-standing entity that has always been there, has ups and downs, but is there like an old friend when you find the time to show up again.

This is not the case.

The Pinball Hall of Fame in Las Vegas has only come into the world this year. It is the work of a number of people but primarily Tim Arnold, a fervent collector of pinball machines who has been credited with having nearly 1,000 in various states, but with over 400 in good shape. He’s had this collection for decades, having been an arcade operator or involved with them about as long as I’ve been alive.

His dream was to have a place loaded with pinball machines, a museum where you could both see these artifacts of the latter half of the 20th century but also be able to play them. And not just play them, play them at the original prices and have a great time.

Currently, that dream has come true. Here are screengrabs from video I shot today with Mr. Arnold’s permission: 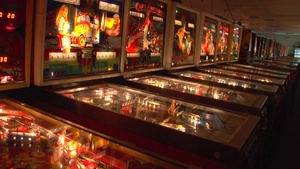 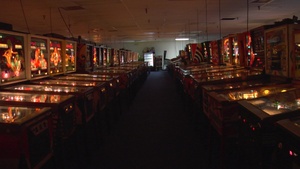 If you like that shot, I have a collection of additional ones (that will load very slowly, sorry about that) at this page. (When I’m further along with the project, it’ll be moved to faster hosting, but for now, it’s in my basement)

These are, to me, beautiful, exciting screenshots, and they tell me I’m going to enjoy making this documentary. But they’re also a warning, and they’re also an important thing I must say.

This is a registered non-profit, who incur thousands of dollars in rent and utility bills (these are a lot of machines to have in one place and all are turned on), and who get their funding though people playing these games.

There is no reason this place shouldn’t be packed, filled with people playing these old classics, trying out games they’ve never seen before, learning and having fun at the same time. I spent hours there today, setting up these shots and playing the games myself. I thought I knew a lot about pinball. I knew one half of butt-all. I saw companies and machines I’d never heard of. I took copious notes as I shot the videos, and I have a lot of research to do as a result of a mere evening.

This jewel, this shrine of pinball was mostly empty this Wednesday day. In Las Vegas. That’s somewhat inexcusable.

Right now, people my age who played pinball throughout their youth, who would stumble a little walking into the Pinball Hall of Fame, are downstairs in this hotel jamming $20 on red and pressing the little start button on the slots, over and over, eyes fuzzed over.

The Pinball HOF is off the strip, to be sure: it is four miles to the west of it. But on the other hand, four miles. You drive there between the hours of 11am to 11pm (midnight on Friday and Saturday), 7 days a week, and your four mile jaunt is rewarded with hundreds of games to play, using real quarters (no tokens) and with your money going towards the upkeep of the machines. Oh, and charities.

As if this wasn’t cool enough, a few of the machines and the snack vending goes to charity. To charity! So not only does it raise money to keep the place going, it actually donates money to good causes (which the site makes clear, and the checks of which are pasted up on the wall of the place). Thousands of dollars have been raised this way even in the short time the place has been open.

I wish I had a little glowing white button I could flip the cover off of and slam, a Slashdot/Digg/BoingBoing/Wired buzzer that would go off with a klaxon blast and make the news of the Pinball Hall of Fame go far and wide. I would love for that place to be a required destination for anyone who loved Pinball to see, like we now stop off at Niagara Falls or the Grand Canyon or any of a thousand culture landmarks that fill every day with gawkers and wide-eyed children.

I don’t have that button but I do have you. You now know about it. Go there or tell someone who you think should know about this place.

The Pinball Hall of Fame is at http://www.pinballmuseum.org/ and is worth the trip, I promise you. Let the world know. This place needs you.

Update: The editor of the Pingame Journal, Jim Schelberg, has put up what I guess counts as a fan site, www.pinballhall.org, which has a different approach to the information (and links to some pinball stuff you can buy. It has additional photos and descriptions of the place, too.