I wrote in an earlier weblog entry that one of my primary motivating factors in terms of completing or working on projects was less some sort of lofty goal regarding the meaning of my work, but the fact that I occasionally drift through periods of intense, hellish pain. This past week was one of those periods. Over the weekend of July 1st and 2nd, I felt a little twinge in my kidneys, but figured it would deal with itself. On Monday and Tuesday (3rd and 4th) it was kind of in the background. By Wednesday, it was obvious that I was in for a rather painful ride.

Normally, the period of time from “hey” to “COME, CHILD, STARE INTO THE FACE OF EVIL ITSELF” to “oh man” is about 5-6 hours, that is, I might start to feel bad around 3pm and by 7pm I’m screaming and by 9pm I’m left, spent and sweating, sleeping off the hurt. Not so this time. I ended up checking into the emergency room, went through intense pain, and then it just didn’t stop. This was a new one for me, in 10 years of having kidney stones.

I was driven to Newton-Wellesley Hospital, the nearest (and very good) hospital, where, for the first time ever, I agreed to be checked in. I was initially given an intravenous injection of something that could be branded “Motrin X-TREME” but it quickly became obvious this was doing ass-all for me and it was straight to the morphine for me. Over the course of the next three days, I was given over 50ccs of morphine, on a regular basis, by a wide range of nurses, including Catherine, Cheryl, the ever-listening gold-star Suzanne, Roger, and Kate. Each were very helpful in their own way, especially considering how I kept switching between humor-filled monologue guy and writhing eye-flickering man of despair. I guess they see a lot of this. And now you can too: 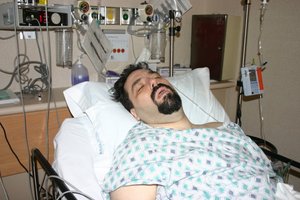 Believe it or not, my greatest concern was not the excessive pain I was experiencing (which was a lot) or the damage my kidneys seem to have incurred over time (which turns out to be a lot, more details this week) but the fact that it was looking, more and more, like I was going to have to cancel my interview weekend in California for the 7th and the 8th. I had a lot of incredible stuff planned between Friday and Sunday. Going to CA Extreme, meeting some of my best online friends (some for the first time), and interviewing major heavy hitters for both GET LAMP and ARCADE. It was going to be unforgettable. It became, by the end of Thursday night, an obvious cancellation. This really broke my heart.

In fact, I’d resisted going in for surgery, because I thought (like a gallon of Stupid in a cup of Brains) that the recovery time might affect the trip. In fact, it was the small matter that I was jammed utterly and totally with a 4 millimeter stone in a bunched-up urether that was going to make me miss the trip, no matter what. So I had an unnecessary amount of pain for an extra 24 hours until I “agreed” with Dr. Saltzman, my new and best Urologist, that a quick Laser up the Ol’ Wang was going to do the trick.

Bear in mind, I have a second stone in my left kidney to go with the one causing all this pain; it hadn’t even gotten its big chance on stage yet and is in fact going to be sonically a-sploded in the next week or two. This will be an outpatient thing, where I step in, I get an injection, and then Something Mysterious happens. This second stone is 50% bigger than this past week’s stone.

As someone who has spent his share of time in emergency rooms, it was delightful to actually experience an organization that actually does what it does well. I didn’t get any asshole nurses, indifferent doctors, sloppy transporters, scary “missed signals”, or any of the other little horrors I’ve encountered in the medical profession in the last couple of decades. My nurses were on the damned ball. I had my temperature and blood pressure checked, by my count, at least 10 times a day. I was given lots of that sweet, sweet morphine as fast as they could reasonably do so, and they even chose the perfect anti-nausea drug to inject in with it to ensure I didn’t accompany my lack of pain with an enchanting fountain display. I did have the opportunity to engage in said enchanting fountain after my operation, but come on, you’re talking about a guy who gets queasy as his finger approaches his mouth, and here I had a breathing tube. My recovery steward was very polite to me, considering the first thing that Old King Cole did was call for his bowl and blow out blood nearly all over the Fiddlers three.

I have forgotten more names than I can remember currently, but besides Dr. Saltzman, Dr. Kennedy and Dr. Luiz, I had the aforementioned pile of nurses watching me, a real hip guy with a Euro accent running the CAT scan (who did a bonus Gall Bladder check for me, at my request, thereby making him a Hip Euro CAT Scan DJ who takes requests), a pair of really with-it anesthesiologists with television-quality bedside manner (one called the initial knock-out IV I got “your special treat”) and no less than 4 people, all separately, checking to make sure that the right kidney was being operated on. (I have multiple marks and signatures on my leg to prove it). In other words, A+++++ WOULD EXPERIENCE INTENSE SOUL-CRUSHING PAIN AGAIN, as the Ebay evaluations like to say.

Today, Saturday, instead of being at the incredible California Extreme, interviewing folks and generally adding to my documentaries and time with close friends, I’m lying around at home, unable to sleep due to what Dr. Saltzman called “after-effect irritation and stinging” and which I call “ABC’s Wide World of Peeing Red”. Not what I’d like.

But you can be rest assured that I will make up for this lost time. Every second of it. While in the hospital, many amazing people mailed me about being interviewed, and many other amazing e-mails came back from friends who were informed by various channels of my affliction.

And after being off the internet totally for three days, my computer addiction is cured!