I have a page of webstats for all my sites. I occasionally check it to see if anything’s funky. Since the textfiles.com sites are all hosted in various places, I don’t necessarily notice if something gets hit until the fun is over.

Such is the case when I found out that in 6 hours, over 24,000 people read a file about Hacking Scantrons.

In a web statistics generator, it looks like this: 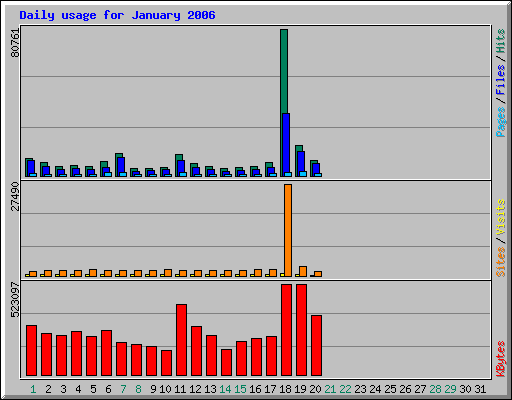 For this, we can lay the blame on this file, decontextualized, being made a “digg” on digg.com which is basically a more level-playing-field version of slashdot. People can say “I digg this” and it gets moderated up or off the front page, as well as allowing others to comment, and so on. The link for this one is here. 1,215 people said they “dugg” this file, as of this writing. You can’t “undigg” as far as I can tell, so it’s either “positive” or “abstain” in the voting process. Oops!

There are apparently several ways to take on a “digg” that you don’t like, and the methods were attempted against this “dugg” link: Someone came along and created a fake scantron article link in a desperate attempt to get the original off the front page. And of course someone tried to submit another similar file to get themselves some diggs and that failed as well.

A much more informative aspect is the running commentary from the people linking over to this file, and it brings up a pressing situation that I’ve been studying in a roundabout way: information pollution. Since the web.textfiles.com file is being linked to directly, I think a lot of people might get the impression this is a living, vetted, working article. It just shows up on the main page of digg.com, presented with no useful context, with this description: “Sick of filling in those stupid bubbles? Want to artificially boost your academics? Scantron hacks… Note: the chapstick was just a BS rumor:”

No commentary of any usefulness about the article, and an implication that it is, in some way, useful and truthful. It’s not. It was written over 10 years ago, and even if it worked in some way (and the article doesn’t even imply it’s more than a little bit successful at best), it sure as heck isn’t going to work these days anywhere like it once did. But since the digg user presented it with little fanfare and hot-linked it, people who “just browse” find themselves lapping up information that is problematic indeed.

So why do I even have it up? Well, I’m a historian. Even a few years later, this file contains some interesting information outside of a questionable methodology for messing with scantrons: it shows how people were affected by these devices, gives ideas of the teenage desire to beat the system, shows the use of “how we did” verification via encrypted signature back then, and a host of other tangental signposts.

I would consider the happiness in which people will pick up this file, not even trying to determine its context, and go off on its usefulness or relevancy, to be equivalent to running into an antiques stores and trying the rusted dental tools in the back, right now, in your mouth, and then complaining that the experience was not hygenic or pleasureable.

Over time, this problem is going to get worse, as all manner of material is a single click away. I’m not saying something needs to be done, but it’s something I’m aware of and watching, and maybe as time goes on, I’ll comment on it more and think out more of what “information pollution” could mean.

I say this, of course, with the apparent equivalent of 500 smokestacks blasting out from the textfiles.com factory.