In 2009, I proposed the idea that rapidly-shutting-down websites should be quickly downloaded and saved by a fast acting and future-minded group of web archivists. I called them the A-Team, or Archive Team, and said they’d be the last resort for online history that was otherwise doomed. An unbelievably huge amount of web history had been deleted by that point, subject to capricious whims of startups and dot-com tomfoolery that resulted in quick shut-offs.

A good number of people had this proposal resonate with them, and they volunteered time, money and effort to making this team a reality.

In the interim years, I have done dozens of appearances, interviews and statements regarding the goals and ideas of Archive Team. With my skills in public speaking and a willingness to stand in front of crowds, I’ve been the face of Archive Team to many people. I’m still involved with the project daily, and provide advice, make connections, and do whatever else I can to help with the goals of the Team. 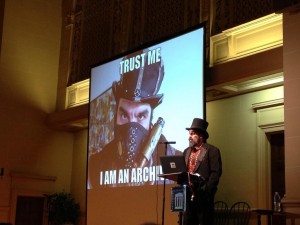 In 2011, on the strength of a talk I presented at the Personal Digital Archiving Conference, I was hired by the Internet Archive as a free-range archivist, working with the non-profit on a huge realm of projects. Some of these have been internal efforts and some have been widely public, like the collection of software or preservation of various musical archives.

All of this brings to bear a very important distinction:

Archive Team is not an Internet Archive Project, and I am not the owner of Archive Team.

Archive Team has no offices, no phone number, and a website that is a wiki that any reasonable person or team member can edit. While I am a (generally) beloved figure who is appreciated for his public speaking skills and snappy dressing, Archive Team has collectively disagreed with me and some projects have been approached completely different ways than I would have approached them.

As the saying goes, if I was hit by a bus later this afternoon, Archive Team would be very sad, but would get back to work by the evening. The early evening.

While I am pleased that the Team listens to my opinion as much as it does, there have been projects and efforts that were started, refined, and producing output long before I wandered into the communication channel. While my presence is then acknowledged, the Team has continued the given effort as it would have anyway, preserving and rescuing online history from total oblivion for the good of society and future generations.

Archive Team is an idea, and the idea is far beyond me or even the Internet Archive at this point. I expect this to continue.

Meanwhile, I have been actively avoiding the front of buses.

Categorised as: Archive Team | Internet Archive | jason his own self