This has been years in the making. 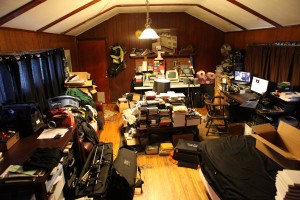 When my living space looked like this photo. it was just vaguely problematic. Considering what I do and what is specifically needed day to day, this project and storage situation was an issue.

But that was a while ago. Now we’re at this: 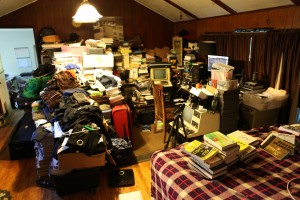 See, that’s seriously out of control.

There’s two main contributing factors to that state, which is that I had to quickly consolidate from other parts of the house I’m renting when space was needed for other items, and I simply did not have time to address incoming material when it came in, so it became a matter of just finding space for things mailed in and then saving it for later.

This is to say nothing of the shipping container, which currently looks like this: 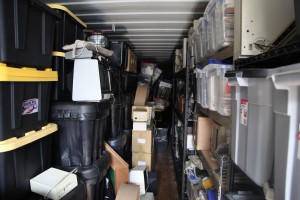 So, that’s a lot of stuff. That’s a 40-year old’s ability to acquire material and bring it to bear into a storage space, with a splash of “divorced in 30s” and “moved out of the house”.

But here comes the big changes.

The book scanner is back up again. That provides me the ability to scan in materials before finding them a home elsewhere. My rule is nothing leaves the house in printed form unless it’s digitized in some fashion, and I have a copy of the digitization.

With the books scanned and going to a home, that then leaves magazines.

Magazines scanned and going to a home, that then leaves academic papers and proceedings.

Believe it or not, just getting those out will probably clear things up beyond belief – I’d say a MAJORITY of material in the container and my room are printed materials of this sort.

As I begin going through the books, I check for them on the Internet Archive’s Open Library site. I see if the book has been scanned already, and it’s quite shocking just how much the Archive has scanned over the past few years, then I know I don’t have to scan it. I spend a small portion of the time that I would have spent scanning adding some background information to the Open Library entry, so that the book has a better look. I also ensure the cover image looks good, and so on. Then it’ll go into a box of outgoing material.

With that going on, I’ll getting a pile of to-be-scanned books and an outgoing pile to be sent away. That brings up the next issue.

Where do they go? 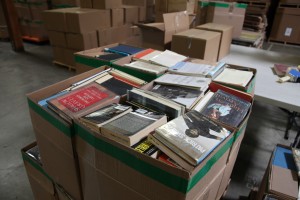 I do not throw out books. Let’s repeat that – I do not throw out books. I go a little further, in fact, and I will not give the books to a place likely to throw out the books. I consider that up with the cowardly act of leaving your longtime pet with the vet to be put down, while you tearfully drive home. You did the deed, you just didn’t own up to taking responsibility. So I’m not donating/contributing these books to a place that is likely to toss them.

This cuts down the potential field dramatically.

For books related to games and gaming, a home is already in place – The International Center for Electronic Games at the Strong Museum, in Rochester, NY. I’ve built up a great reputation with those folks, and they are delighted to be getting that set of material. They don’t mess around. They get things done: 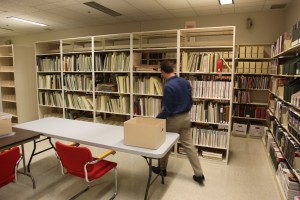 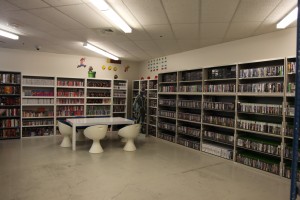 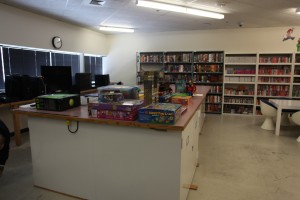 One of the reasons I really like them is that they have an honest research library and space you can work in – you can get a hotel nearby, and go in and do actual work involving having a table and even a locker to store the printed materials in between days. It’s what I really want for this.

Because, you see, it’s not about me having the most stuff. It really never was. I am not interested in going after as many lost collections as possible, pushing them into a bigger pile, and declaring victory. I want this stuff accessible and useful.

About 4-5 times in the last two years, people have approached me asking if I have X, and the answer, in 3 of them, is essentially that I do have X, but X is buried way the fuck down in the shipping container, and good goddamned luck. Well, that’s not right at all.

So off they’ll go.

The question that remains is where.

I’ll be packing these scanned-or-verified books into boxes, putting them in bags before doing so, and then looking for a place these will go.

The place will have to have a phone number, people on salary, and physical space dedicated to storing and accessing the materials.

I want to talk to them and I will probably want to tour them.

So that search begins – here’s hoping I find one.

In the meantime, now begins what I hope is the next phase – slimming down my collection while making it available to the maximum amount of people. 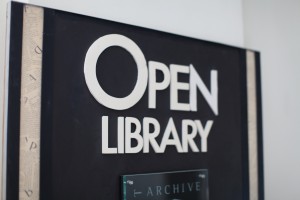