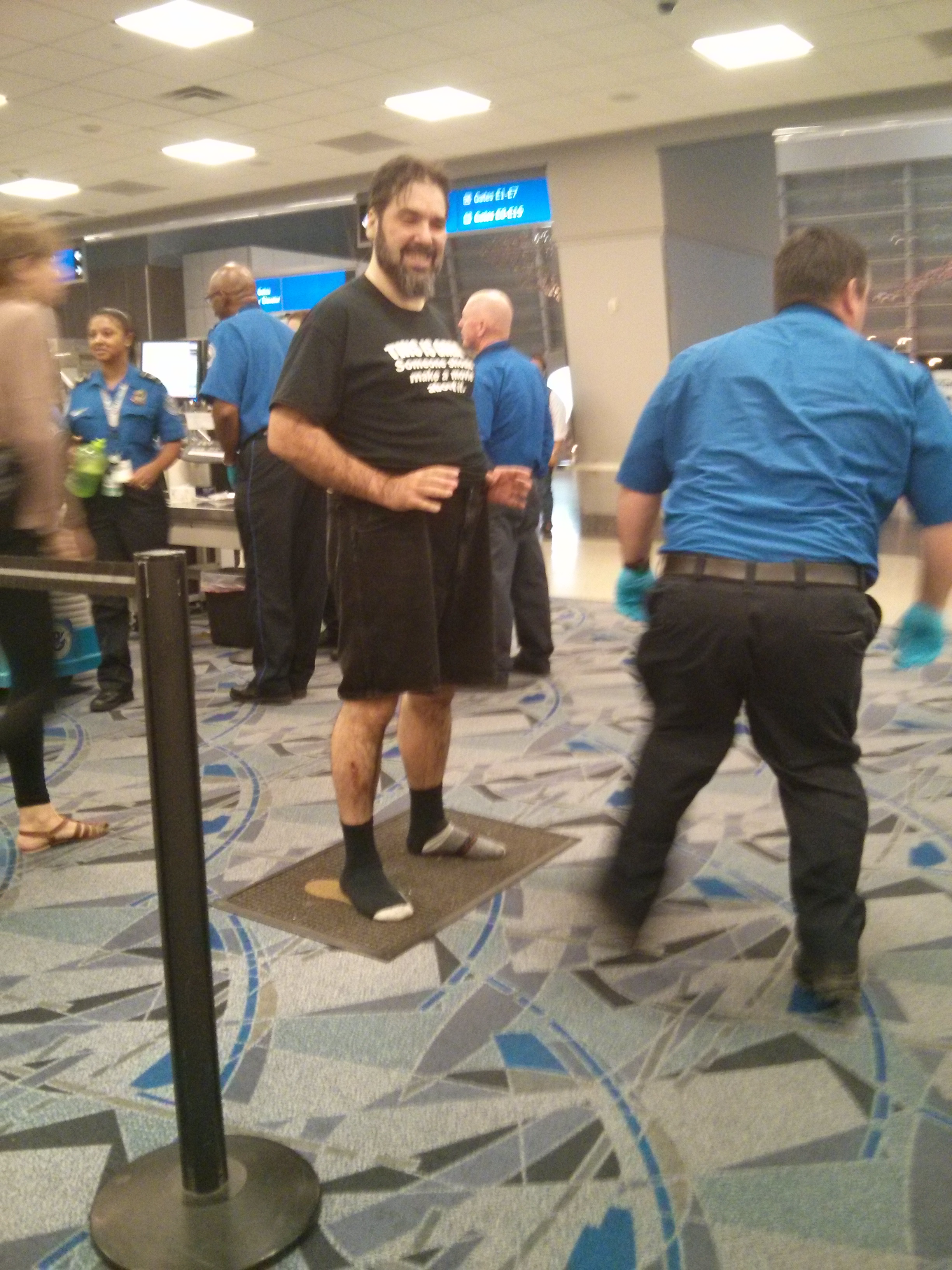 I have completed my initial impromptu 10 year survey of the transportation security administration.

I was drafted into this wretched task as a side effect of my work with my first documentary. Whereas previously I might travel one or two times a year by plane, I suddenly found myself taking dozens of flights, until I looked back and realized I had traveled over 100 times by air. This puts me, I think, in a rare position to assess the methodology by which people are checked to make sure they don’t wish to hijack or blow up a plane.

I’m sure along the way the TSA has invented all sorts of other reasons besides stopping blowing-up-people from doing the work they do, but primarily, they are supposed to stop the planes from being flown into buildings.

On this, we have to give them the causality award. No more planes have been flown into buildings. Not a one! Perfect!

And the very tiny, very small price we’ve had to pay as a result is that every single goddamn plane flight is turned into a miserable carnival of meaningless activity, stupidity ruling the day, and needless stress and hassle. We’ve trashed civil liberties, harassed seniors and infants as if they were gun toting mercenaries, and generally made everything worse in the realm of planes. As a bonus, talk continues on increasing this randomness spot checking into other major forms of transportation, since that causality award opens a lot of doors.

Well, except for cockpit doors, which were reinforced after 2001, in which continue to be one of the best defenses against trouble on the plane. Much more, one might say, than the moron river of pre-flight check-in.

Harkening back to 2002, I began flying in January, just in time for all sorts of insane new rules to be put in. As a bonus, nobody had any fucking clue as to what methodologies would work, what wouldn’t, and whether it was all worth it. Heady times, indeed.

At the time, my dash of Russian heritage ensured that I fell below the swarthiness threshold so I could expect extra special harassment and attention from the flood of mouth breathers with badges slapped on them to look authoritative. My strongest memory from those early days was the older gentleman who had me unscrew every lens in my collection, so he could peer through it, ostensibly studying as to whether I had shoved some sort of explosive, weapon, or incendiary within my trick camera. “If you can see the light, it won’t blow up, right” must have been the trusted rule of thumb in effect.

I could allow some period of random running around, as the palpable curtain of fear in the wake of such a horrifying event could make many people enact poor decisions. Initial freakout overreaching panic grabs are a hallmark of unknown danger, after all. Eventually I got way too light-skinned for special treatment, for example, although my camera equipment would still raise alarms.

Unfortunately, the rest of these arbitrary rules, responses to random perceived threats imposed on a countrywide scale, became the rules, the manifesto, and the unquestionable wisdom of those above. We then gave these randomly imposed and unexplainable rules down to some of the most mindless individuals in the public sector. And that’s when it started to really suck ass.

Probably the most infuriating aspect is the inconsistency. In some airports, you can put the shoes you wear into a tray. On others, you will be yelled at as if you’re some sort of uncouth beast, up to and including a hygiene lecture. I’ve seen that happen more times than I like. In other airports, the Shoes Off Rule isn’t enacted at all, with this fact gloated upon as if it was some sort of gift from the heavens, or a tax-free Jubilee day. In all cases, these are the results of random reports that someone might put something incendiary into their shoes. The fact they may put something incendiary anywhere on their person seems to have been an unfortunate omission in this genius plan. In some airports, this condition of shoelessness is supplied with a clean carpet. In others, cold tile, disgusting mats, or random carpet greet the travelers. It effectively ruins the dignity of travel like applying a Brillo pad to a beloved metal brooch.

Liquids. Really. Tell me again how your random scenarios justified the astounding amount of waste that’s been caused. Also tell me about how explosive material, now barred from the plane, can’t be placed in the trashcan full of tons of other liquids.

It’s kind of crazy that tugging at your belt and removing it in a crowd is acceptable now. I kind of dig that one.

In some airports, you have to take out anything with electronics. iPads have a quantum state of acceptable and non-acceptable. In others, I have shoved a suitcase full of Circuit City through the cancer-o-matic and watched it go through without a raised eyebrow. You have not looked into the true face of a coma patient returned to the workforce until you look at an x-ray operator at TSA.

I’ve got a lot of friends in the security industry. I have yet to hear one justify or defend any aspect of what the TSA does now, compared to simply checking for metal, and occasionally quizzing people as to where they are going to see if they freak out. They all know it’s bullshit. They know it in their hearts, and they say it all the time. It. Is. Bullshit.

More than anything else, to be honest, it’s the speeches that get to me most of all. The faltering, mealy-mouthed, this side of illiterate proverbs shouted by tsa agents at crowds of tired, huddled people just trying to get onto planes they paid hundreds or thousands to get on. It’s obvious there’s no class given to provide these nuggets of wisdom. They’re obviously the frustrated bleating of people with no real training and no real way to express their frustration at the occasional missed item or the forgotten bag put in the wrong way. For some reason these really grate on me. They’re like McDonald’s employees yelling at you about good nutrition. They yell platitudes at people, and then turn their heads 5° and yell at the three people behind the people they yelled at.

This is the situation, every day, every hour, as thousands and thousands of people travel around the world, to and from this country, and experiencing the absolute bottom of the barrel customer service experience.

Of course, I can’t merely be content with being shouted at, given inconsistent instructions and declarations, and forced to walk slow death marches through tedious empty procedures. No, I am also what’s known as an “opt out.”

This means that I refuse to go through the millimeter scan wave machine or through any other variation of crappy technology to deep scan my person. I have this right, and I take this right. And when I declare it, I am made to stand off to the side and wait for them to find someone to inspect me. In some airports, they use a radio system and somebody comes in nearly immediately. In others, they do it by shouting “MALE ASSIST” into a crowd of people. This works about as well as you can expect. The record, currently held by Minnesota, was 45 minutes before someone showed up. It’s not a matter of major airports versus minor airports. They just literally have radios at random airports and shouting at others.

If I’m really lucky, the agent tries to explain to me why the scan wave machine is not harmful, and is not a problem. Those are very special times indeed.

When you opt out, someone comes over and feels you very insistently.

I’ve now been deep fondled by such a wide variety of agents, that some of them are getting second and third runs at me. Since I know the procedure by heart, I often immediately make statements declaring that I don’t want a private screening, and that I don’t have any medical equipment, and I have no sensitivity. Some agents smile and then continue. Others frown and insist that the rules say they have to say it all to me even though I just said it to them. No such rules.

As I stand there, arms outstretched, I think about how little this does for me, for safety, for liberty, for any of it. It is simple cargo cult fondling provided as some sort of safety dance for a threat neither understood nor relevant.

As a bonus, I like to waggle my eyebrows at passerby as the process goes on. It adds spice.

Finally, after verifying I’m not carrying an AK-47 on my person, every agent does the same thing. They take their gloves, rub them with a small cloth, and shove them into some sort of anti-terrorism easy bake oven that dings to say I’m not a terrorist. It is so obvious that many of them have completely abdicated any logical thought and simply let the machine ding their way into the next part, that I’ll bet these machines are rarely cleaned, and totally don’t work as advertised.

So my assessment? Not positive.

Like any terrible service industry, I’m sure there are agents that surprise and delight, who show intelligence and compassion and thinking far beyond the confines of their job, and to serve with dignity, wisdom, and authority. On that topic, I can also tell you about the time I met a very smart goat.

In recent times, they’ve now created special pre-check fast lanes, so the privileged and well-off can pay their way through faster security. Somebody has forgotten about the phrase “attack vector.”

They probably also forgotten how wonderful air travel used to be. I’ve had the privilege of traveling in other countries, to get a glimpse of those times, when security was important, but not an excuse to crush and ruin the day of thousands of people, chasing tail, accomplishing nothing, wasting and ruining and decimating the amazing experience of travel.