Here is how not to treat your customers, especially ones that think you’re doing a great project and support you at a time before you’ve proven yourself.

In February of 2012 (be sure you read that correctly, 2012), I attended a screening of Linotype: The Film at the Typekit offices (now fully owned by Adobe). We were shown this excellent film, itself full of life and wonder and history. I was entranced, and delighted someone had gone through the effort to make a documentary on this subject.

At the back of the room, after the screening, members were encouraged to purchase copies of the film, with a standard and deluxe edition available. Naturally, as I like to have unique things, I ordered the deluxe edition. At that point, the deluxe edition did not exist as a product and we were pre-ordering. It was $75.

Later, a photo of the deluxe edition was made available. It would look like this: 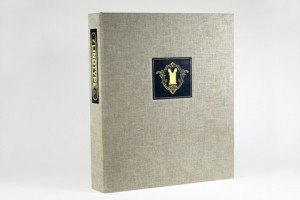 The description was similar to this, while it was still up for sale: “This deluxe case is hand-made by film participant, Davin Kuntze in Brooklyn, NY. Limited to 100 cases, we only have 6 left for sale. Using the highest quality materials, this deluxe case will sit on your shelf proudly. Included in the case is a brass matrix and a slug of Linotype type that says “Linotype: The Film 2012″ along with the DVD.”

In December of 2012, apologies were made for the delay in getting the Deluxe edition out the door. I’d already bought the “standard” edition at this point. It was now 10 months past the ordering date. They’d informed me this by e-mail, by the way.

In February of 2013, I went to New Zealand for a few weeks. While I was there, the case was delivered, but as they’d put a delivery confirmation on it, the case was bounced and a “your package was not picked up” was left for me. I didn’t find this slip of paper in the pile of mail until March.

Finally, I wrote to ask them to send it again.

This is what I got back:

Let us contemplate how the sky looks in Doug Wilson’s world.

If someone gives you $75, speculatively, and then you sit on that money for a year while you get your act together with your craftsman, and then when you mail it you run into a standard, old, run of the mill issue with postal mail, that gives you the right to just go ahead and resell that item.

Never mind it’s a severe limited edition. Never mind that you had the e-mail address of the person and didn’t request a follow up. Never mind that you could probably be assured that someone who gave you $75 and whose address you had, and who didn’t raise a fuss for the year you took to deliver, was probably a bit of a fan.

No, you get to just go ahead and dump that shit to the next person to wave the money.

When GET LAMP was funded due to people giving me $50 in 2006, and the movie came out in 2010, I mailed out the promised packages from that club. Those packages all got delivered, except a small amount.

I still have those packages, three years later.

They are sitting in my storage unit, as I try occasionally to track down the people involved, and get their attention, and see about them getting their promised edition, that they paid for 7 years ago.

Because that’s what you do.