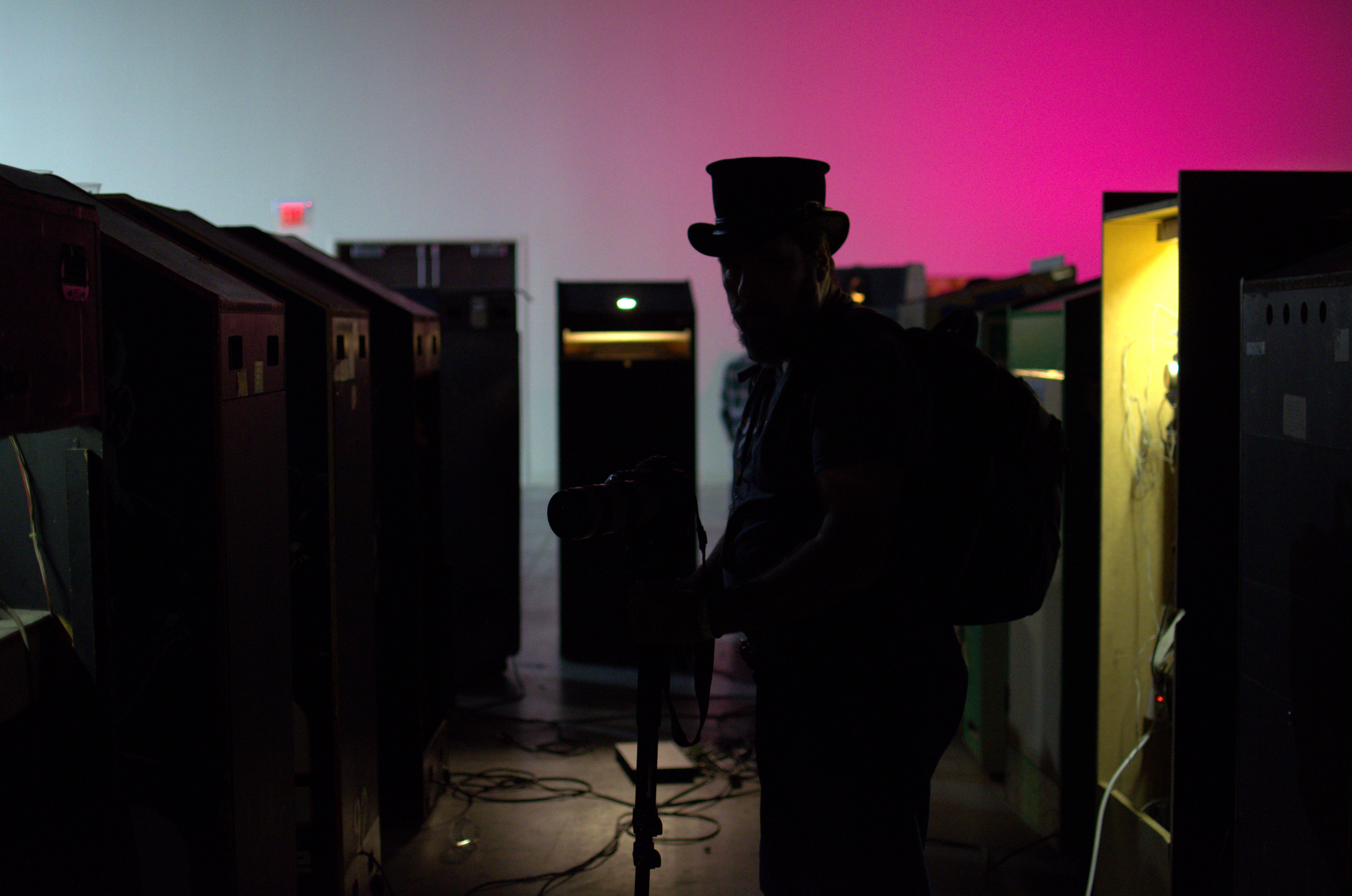 I attended MAGfest this past weekend. It’s a festival with thousands of people, held in the Northern Virginia/Maryland area, and packed with music, anime and videogames. Lots of videogames.

It was also the first Games on Film festival, where a film I made (GET LAMP), a film I edited (Going Cardboard), and a pile of other movies and documentaries were shown. I’ll talk about them in a moment.

When I wasn’t up in the room with the festival, I was spending time down in the Arcade, which was a beautiful room filled with over a hundred arcade machines. I took some footage for background footage for the Arcade documentary, using the really nice camera setup the kickstarter paid for. Here’s some screengrabs from that footage: It’s a nice feeling when you’re no longer spending time being concerned about this flaw or that error, and just enjoying the way the footage came out. Most of this was filmed in the early morning hours, when things get loud and spectacularly crazy. A truly productive filming run.

No dates on when the Arcade Documentary will go from in-production to editing, but thanks to this great festival, I can tell you about a few documentaries worth checking out now or in the near future.

First, I saw an in-progress rough cut of Space Invaders: In Search of Lost Time, which focuses on arcade collecting and the motivations and expressions of that. I could tell it was a rough cut just by the amount of additional footage the director had in there that would inevitably cut out – but it was enjoyable footage regardless. Here’s a trailer for the film:

You might wonder what my thoughts would be on seeing a film covering something that one of my own documentaries is filming. To be honest, it was initially mixed, but quickly went to gratefulness as I saw what worked, visually, and ways to cover the subject that the film hadn’t and that I knew I could. I actually came away more energized, to be honest. Jeff Von Ward has put together an ambitious work, which looks to be released this year. Looking forward to the final cut.

Martin Touhey showed some new footage from his in-production documentary Inside the Dragon’s Lair, a meditation and study of the story of the Dragon’s Lair laserdisc videogame. I had a great lunch with him, and bless him, he’s already nailed some fantastic interviews, like Don Bluth and Gary Goldman. I have great faith this one’s going to come out and cover Dragon’s Lair wonderfully. He’s got a kickstarter in his future and plans for a 2014 release.

The most unexpected of these new films (to me) had to be Beyond the Game, which was done by a group calling itself Animatronic Ackbar. There’s a trailer from a year ago out, and I’m sure they’ll have another out soon:

As a dark horse contender for my attention, this film blew me away, because I did not expect anyone to take on the subject matter this film does – nothing less than the entirety of the effect of gaming culture in every walk of young life. We see chiptune artists, 8-bit art shows, game competitions, cosplay, arcades, consoles, artwork, historical and celebrity figures who game… even circuitbending. I’m sure I’m forgetting a lot more. This thing was truly epic. I look forward to it, later this year.

Three of the other films, I’d seen before, but it was a pleasure to check them out.

One was Ecstasy of Order: The Tetris Masters, a brilliantly-edited film about the game of Tetris (primarily for Nintendo, but with other platforms making appearances) and the people who have mastered them, all around the framework of the first world Tetris competition in many years. This film is a clockwork-snappy, top-notch sports film, making the audience smarter and super-aware of the effort going on in this game. It’s a miracle of inclusion and explanation, wrapped in a jaw-dropping story of a life defined and then broken away from the game of Tetris. I can’t recommend it enough.

Another was a showing of Indie Game the Movie, and I’ve said enough to you how much I love that goddamned thing. If you want to hear me love the filmmakers on stage for an hour, just go over here. Anyway, I saw it again. It’s just as good.

Finally, I saw the very-newly released Mojang: The Story of Minecraft. This is an expertly-filmed work about the runaway success of Minecraft and the effect it has on its designer and the company he builds to support it. I almost feel bad sounding so bland, but it’s just good. It’s solid. I have never played Minecraft, and I found their explanation and the collecting of the story of this magical game expertly put together for me to realize how much of a success this has been, and who Notch as a person is, as he confronts the kind of windfall and celebrity that few of us will ever have to know. I feel like they don’t even need my seal of approval – the movie is out there and it’s a hit.

A weekend of documentaries, a pile of films inspiring to my documentary craft, and a room downstairs with dozens of videogames? And I’m not dead?

Thanks, MAGfest, and thanks to Chad Williams for curating Games on Film. Loved it.