An important milestone is finally here for GET LAMP: pretty much all the full interviews are now up on archive.org.

It was important to me, especially at the beginning, that GET LAMP bring into existence some long-form interviews with people who had been so influential in my life and so many others. The writers, coders and dreamers behind interactive fiction and text adventures were, on the whole, exactly what I hoped – brainy, clever, wry, thoughtful, and full of stories and memories. Naturally, the relatively short length of GET LAMP could never include all these statements in its space, and here we had easily over 100 hours of interviews sitting around in my hard drives.

In ye old days, documentary makers would record interviews and we’d never hear or see the full interviews ever again – if people were lucky, those tapes/reels might end up at some archive, or the person interviewed would be such a big deal later that it would be worth it to some crew to go over them again and re-use them elsewhere. Now, however, things are in much better shape, and now if you want to listen to Don Woods (co-creator of Adventure)  chat about why he did all this, or the poet Robert Pinsky talk about working with a 1980s software house, well, now is your big chance.

We’ve got modern interactive fiction writers, Infocom alumni, even playtesters and “just folks” who happened to be around when the teletypes spit out these fantastic worlds. There’s a lot in there – easily a few weeks’ viewing.

These interviews are “cooked”. This means that they’re the answers people gave during the interviews, not recordings of my questions or my stories I told them to get them into the mood. This is because, straight up, I got buckets of crap from complainers who didn’t like listening to my questions, criticized my voice, dissed my approach, and generally sat in the middle of the theater with cheetos screaming “DOWN IN FRONT” because they don’t know how you get a good interview out of someone for the purposes of a documentary (as opposed to, say, a talk show or a newspaper). I realized I was slowing up getting new interviews out because of the abuse, so this was the compromise. It means people just make a lot of statements with cold cuts between them, but trust me, you’re getting a fillet, not a jumble. A few people have gone “you should present these better”, to which I go “yeah, I call it GET LAMP”. It’s the classic balance – short and coherent or long and a little off-topic and jarring. Now you can choose both.

There are a handful of interviews related to Choose Your Own Adventure/Gamebooks that are not up. This is because they’re being given to a different documentary crew who are going to do a specific gamebooks/CYOA documentary project. I’ll let them have their fun before I put the full copies anywhere else. They’re safe, trust me. And I’ve met the crew in person – great people.

So, please, enjoy this massive collection and, under no circumstances, read anything below this paragraph. Thank you. 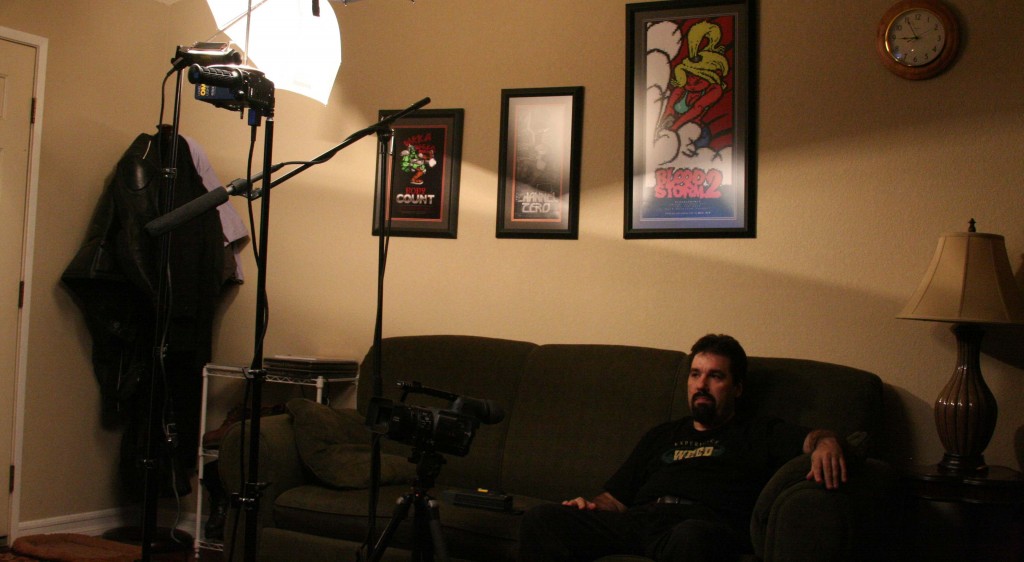 Generally, I inspire confidence in people regarding the documentary and written work I do. I’d like to think it was earned, slowly, in a process of working with people not used to attention or investigation, and giving them the freedom and respect that any reasonable person should expect. On the whole, my general audience might feel the same way – that what comes from me is going to be honest and respectful, and what stays and goes is based on rational thinking and not, say, some subterfuge or fear about “the truth” or what have you. As I’ve been in the public eye in my current historian role for well over a decade and in the documentarian role for half of that, I’ve had some very kind gestures and very heartfelt actions of trust come my way. I honor and acknowledge every one.

Sadly, GET LAMP will always have a few cracks of regret in the sides of the marble Façade. I intend to repair a couple next year, but some things will never be repaired.

The easy to repair situation is that there were several people who refused to be interviewed, and yet anyone who knows anything about the subject knows those people were (and are) critical players. These include Will Crowther, Emily Short, and Graham Nelson. I reached out to all of them about being interviewed. Only Graham was a complete dick about it and wouldn’t even deign to respond – everyone else either explicitly declined to me or declined to my intermediary. I then went in the opposite direction, and pulled these folks completely out of the narrative, in some wrong-headed view of “respect”. This was because I conflated “not willing to be interviewed” with “would not like to have their name associated with the subject or your documentary in any way whatsoever”, which was completely off the mark. I will repair this when the downloadable version of GET LAMP makes an appearance next year and I do some minor nicks and tucks with the editing. So that one’s not that big a deal.

The other one is a big deal.

If you currently browse the GET LAMP interviews as of this writing, you will see very few people related to Infocom. You won’t see, in other words, the “big names” and their full raw interviews from my collection. You’ll see a few people semi-related, and a couple people who have given me the go-ahead, but the situation is that I have handed off the raw interviews to those Infocom alumni for explicit sign-off, where they will have the opportunity to review their footage and decide whether or not the raw interviews are released to the public.

And now you might ask yourself why every Infocom alumni had final cut approval of GET LAMP, something the other 60 interviewees didn’t have. Ah, yes.

In the course of GET LAMP’s production, a lot of people came forward with information. Hundreds of people did, with thousands of letters in my archives to prove it. They gave me warnings of subjects to dig deeper on, contact information for people worth connecting, and even some very amusing pitches about why they should be in the film. (Some of those pitches worked, by the way, because they should have been in the film!) I had people send me photos, software, drawings, maps, and audio that sometimes found itself in the final work. I am indebted to these people.

And at one point, someone asked me if I wanted “The Infocom Drive”.

A road-tested documentary guy at this point, and an investigatory type besides, I said “Of course I do. And what is it, anyway?”

What it was was a roughly 200 megabyte drive image, a zip file, containing all the original Infocom source code from its Cambridge days, as well as memos, code-sketches, e-mails, ad copy, and documentation. It was as if the sky opened up and this item fell into my hands. Take a moment to imagine yourself in this position, getting this file, going through it, realizing this is what it was.

At the time, I was terrified I now had something so rare and so critical, that it should be protected and backed up at all costs. To this end, I turned around and put a copy of this drive image with three people in three continents. The idea was they would have a copy if something happened to me or if other issues came forward and my machines were lost or stolen or anything else. It just seemed that important, that once-in-a-lifetime. I also returned source code from these games back to their original writers – I felt that was right, that they should have their own work back. I got some very heartfelt thank yous for this. Private thank yous, of course, but that’s all that was needed.

I thought I’d trusted the three copies to my closest friends. I was wrong.

One of them decided they didn’t have an entrusted legacy. They decided they had a “scoop”. They decided the best thing to do would be to both announce they had a copy of this drive (and therefore that such a thing existed), and then write a long article in which they explicitly quoted private e-mails, and let decades-old trashing of a person stand. And counter to claims of being a “journalist”, none of the primary figures were contacted before this article went up, even though I had their direct contact information.

Please do not be fooled by the self-serving “update”, written a year and a half after the article was posted and deleting the private e-mails. It’s self-serving bullshit meant to give the appearance of repentance and moral growth. The article was written to gain attention, to garner hits, to parade private lives for the looky-loo public with no regard to the effect it would have.

There is a moment, sometimes lasting a long time indeed, in which a betrayal is so deep and so distinct you have a vacuum of feeling, a deep-space numbness at what has been done. I got to experience that full-hand – what I saw in this betrayal was a direct torpedoing of GET LAMP.

Perhaps you can imagine, if you take a moment, what the Infocom alumni thought of my project, my unfinished film, if this was the action I had taken (even indirectly) with their private correspondence. What sort of movie or dramatic made-up dogshit Discovery Channel-level sleaze-collage this documentary was going to be, if this was acceptable. I was in danger of not only losing a project I’d spent years of my life on at that point, but losing all these new friends and collaborators, and most importantly, being a party to hurting them and making their lives worse off, which this article had most absolutely done.

Besides a very honest apology to all of them in e-mail and on phone calls, I also immediately offered them final cut approval of GET LAMP. They would get to see anything with them in it (which were most of the films and bonus features on the DVD) and let them decide if they were comfortable being a part of it. If they were not, they’d be gone, removed from the film.

As I am a person who respects his subjects and who tries to remember I am chronicling lives and not just Google-honey, the final work was approved by all. The small delay in waiting for sign-offs was negligible for the sense of relief that the film would not be regretted.

Every once in a while, someone mentions the article’s author in my presence, assuming that we are friends and we collaborate and work together. They assume wrong, and are often shocked to find it is not the case. Now they perhaps more clearly know why.

It was a very hard mistake I made. It was a terrible lesson to learn, and I learned it.

When I watch GET LAMP or think about the project, it is a sad off-tune note in the orchestra that I hear in my heart and my ears, souring things ever so slightly. Not enough to regret having done the project, but to wish to get onto the next projects and never expose my subjects to such a humiliating parade again.

And maybe now you hear it too.