Earlier this year, I was hired by DEFCON to do a DEFCON documentary. 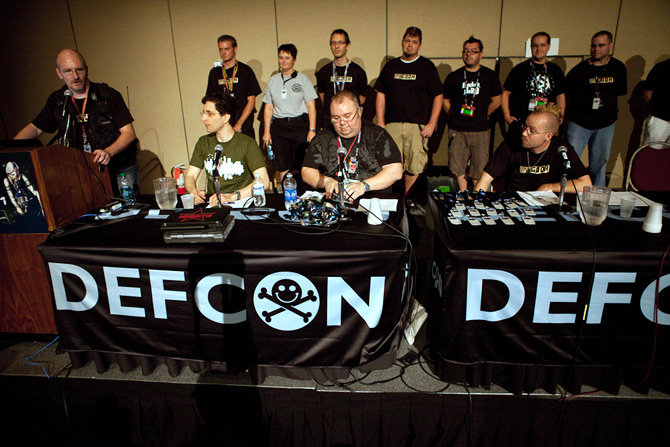 DEFCON, if you’ve missed out, is a “hacker conference” that has been held since its beginning in Las Vegas, and this year is the 20th. That’s big enough news that the organization wanted to capture it in some way, and they hired me to do it. I’ve been a DEFCON attendee on and off for about 12 of those years, and I’ve made an occasional documentary about technical subjects, so here we are.

My Kickstarter backers knew about this back then as well, and I also extended an offer to them to have people be in my crew, to see what my documentary approach looks like close up. Six people went for it, and they’ll be filming the main conference along with me, using lightweight rigs that will enable a lot of flexibility. We did a test run of the equipment setup at the MoCCA festival a couple weeks ago. Here’s what I look like with the rig:

If it doesn’t look like all that, it’s not meant to look like all that. But this rig can record 8 hours of high-definition (1080p) footage, can move among crowds with ease, and can be run by a single person in a pinch. The cameras these days are also so lightweight and computationally flexible with regards to lighting needs that a separate light rig won’t be needed for where we’re shooting. I chose this because I know that shoving one of these bastards into a hacker’s face does not result in a very delighed hacker: (Naturally, I’m also shooting with my DSLR setups for a bunch of things along this event, but you trade a really nice image for a notable reduction in flexibility and ease in capturing what are fleeting moments.)

Hired is the word of note here. This is an exercise in something I’m being paid to do, to capture DEFCON to the best of my ability and hand over finished “stuff” for the conference organizers, including a film to be shown at DEFCON itself and a later, more elaborate production to be available a few months after. I wouldn’t have taken this on along with the other three documentaries if I didn’t think I could piggyback all the productions together, and that’s what I’m up to. All my work benefits from this.

Some thoughts on this whole endeavor follow, along with a plea for assistance. Look for the bullet points if you just want the plea.

I’ve been in this “fuckin’ with computers” deal for 30 years now and the nascent dregs of hackerdom in the “fuckin’ with computers in ways the manual and the laws perhaps don’t encourage” for slightly less than that. If there’s cred needed, I have some level of cred, at least as an observer and as someone who brings respect and understanding to the regard of the whole idea of “Hacking” and what that has come to mean to many different people over many different years. Through my websites and archives, I’ve brought a lot of old stuff back from the dead and I’ve spent a good number of years interviewing and getting to know a whole range of people on all sides of the idea of what people are about and their ideas about not just “hacking” but “computing” and “online” and all the stuff in between. I’m a good guy for this project, I promise you.

So in that frame of self-aggrandization, I’ll also happily cop to ignorance on a variety of topics, especially specific ones. I avoided going to anything like a “Hacker Con” until 1999 because I didn’t wish to be targeted. (Once TEXTFILES.COM went up, I started going since I knew I was basically a known target after that, so why hide?) Despite the calls to learn Assembly, C, VMS, PrimOS throughout my teens, I just didn’t go there – I still don’t consider myself much of a coder or developer type, sticking with shell scripts and pre-made applications by others. I don’t know it all. I don’t have every frame of a potential documentary planned out beforehand.

Unless they have a correction to issue, I was chosen by DEFCON to do this documentary project because I’m part of the culture in some fashion, a DEFCON regular, a guy who has actually shipped shit, and someone who works thoroughly to a fault. That’s the gist of the conversation that went down.

So in that characterization, I am approaching this documentary like I did with the others, with the exception of a much more intense recording of the event itself, utilizing outside crew for the first time and having to organize said teams throughout the event. Other than the run and gun nightmare that that will be, everything else is me doing what I’ve always done: researching the context, sending out messages, doing phone calls, acquiring images and video and sounds, and amassing all the pieces to make something that captures DEFCON as best as I think I can.

So, what exactly is DEFCON?

Well, approach any of the tens of thousands of people who’ve been to DEFCON over the two decades and you’ll get a unique story and description. This is, frankly, the case with any large-scale event or conference – it’s the same for Origins or PAX or CES or Comic-Con and all those perspectives converge from wild directions with thematic similarities. So in the case of DEFCON, you’re going to get that as well.

If there’s anything unique about the DEFCON situation, it’s that it is, literally, a grouping of individualists, a pack of leaders, a regulated and protected anarchy. This tension is not just viewable here and there – it’s endemic. It has always been the case, and it always will be the case. From this arises an enormous amount of tension, derision, weird feelings – that’s something I have on my radar.

And like all such events, there are “eras”, different times when different people were the prominent figures, and the influence of the various hotels overlaid different aspects to the proceedings as well. This fog of influence and perspective is present throughout the idea of DEFCON, and I’m working on trying to capture some bit of it.

For some people, the whole idea of a documentary is stupid. Sorry. Conversation ends there.

For everyone else, I’d like to reach out to ask for assistance acquiring pieces of DEFCON lore and legend, artifacts and history. Here’s the bullet points:

This is going to be a hell of a project. I’ll have more updates, but I wanted this all out here. If you can help in any way, great. I want something that does the event justice, or at least resulting in something people can point at to explain to others what it’s about.