Naturally, one might be inclined to look at a massive project one did, like a two DVD documentary on text adventures, and instead of remembering how you got there and how hard you worked and everything else, just see the flaws. I’ve had GET LAMP flaws held up to me on several occasions, actually many occasions, but I’m not overly embarrassed by them. They’re good flaws, the flaws that come from sticking your stake in the ground and hitting all your goals.

Besides the “focuses on North American text adventure culture and industry” flaw, which I was forced into with the footage and budget I had, there’s the “interactive version menu is fantastically clunky” flaw. I am happy to live with that one because as the DVD format sunsets out, I at least reached for the potential that was supposed to be baked into the format. But it’s hard to deal with and doesn’t work in all DVD players, and so there it is. (This is why there’s a “non-interactive” version – I just punted, hit the CTRL-FUCKIT keys, and made sure people could enjoy all the footage. I always play the non-interactive version when I screen the movie.)

There is one flaw I don’t abide by, and there was no way to see it coming.

The GET LAMP documentary DVD set has a couple secrets in it. A couple standard DVD-style easter eggs, of course, and the packaging has one, but the one that I’m talking about is the Infocom documentary. Here it is at the bottom of the main menu: 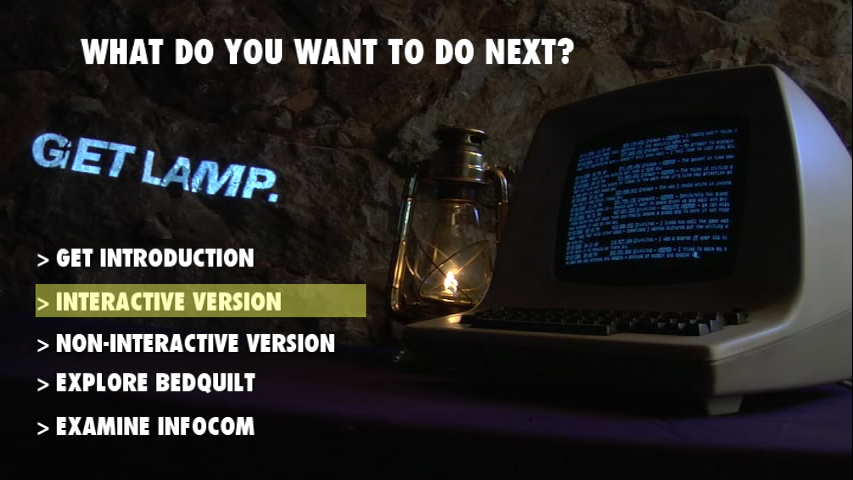 Somehow, and I blame myself, GET LAMP became in many eyes the documentary about text adventures that is the main mix but the Infocom documentary is almost never mentioned. But it’s far and away my favorite! Unlike GET LAMP in the main, Infocom (it’s called simply “Infocom”) is a very focused, very time-oriented and explanatory documentary episode, clocking in at just 50 minutes (technically 47:05), that lays out Infocom from start to finish. It is, far and away, my favorite part of the DVD’s materials. It’s a pretty straightforward piece of work, yes, but the amount of respect I have for the Infocom people and their unique place in history comes through everywhere. Sure, there’s negative things some people say, and it does get contentious here and there, but I really feel I did that company justice in that episode.

The way things are arranged, Infocom just hasn’t been something people focus on when they discuss GET LAMP, and that’s all my fault. Regardless, it’s the kind of film I’d like to see about a lot of game companies, although I don’t know how many we’re going to get.

More than that, this episode has a hilarious commentary track, with Stu Galley, Mike Dornbrook, and Dave Lebling, recorded at Mike’s apartment. I love that thing! Hanging with childhood heroes of mine, having them all interact and chum around, and drop some great trivia. I turned a personal profit on the whole project right there – it didn’t matter if I ever sold a copy.

But my whining about this hidden jewel aside, I wanted to mostly respond to an event happening out there that’s getting attention: The Double Fine Kickstarter. (I am actually kind of sad that this name refers to a fundraising venture, and not, as it should be, a drink involving twice-strained tomato juice, caffeine and vodka.)

No, the Double Fine Kickstarter was the using of the fundraising platform Kickstarter to fund a point and click adventure. They asked for $400,000 in 35 days, made that in eight fucking hours, and landed at the astounding amount of three million. Kickstarter had never had a million dollar funding before, but now they have three, this, a comic book reprint, and an iPad holder that barely squeaked into the nine-digits-club before close. And here’s the big thing: it’s to fund a point and click adventure.

Now, point and click adventures show up nowhere in GET LAMP mostly because I didn’t have space to go all the way through every derivation of the text adventure medium that came in the decades hence, but point and clicks have a strong heritage in such and for some people represent the fog-filled trailing edge of their gaming childhood. So it has been a pleasure to see so many people step forward with an interest to have a new one made… including myself, who funded at the “give me the documentary and the resulting product” level.

Therefore, let me take this moment to address the idea of an Infocom Kickstarter.

“An Infocom Kickstarter?” you say. Well, believe it or not, the concept has been mentioned to me in multiple forms, in various ways, throughout production of GET LAMP, and especially once we saw the Kickstarter concept really take off, and seriously getting into my face upon the release of the movie and Kickstarter being used to fund really wild things, computer game wise. The plan, roughly, is:

1. Get the Infocom People to make another Infocom Game

2. We play the Infocom Game forever

Rather sketched-out, really. All ready for the details. So allow me to answer it.

First of all, the idea of pulling infocom implementors out of cryosleep and giving them the ability to make another text game was done: it’s called Zork: The Undiscovered Underground. If you can imagine a performance by an established musician who’s 30 years into his career, the approach was the same: you have the warhorses doing the rough outline (in this case, Marc Blank and Mike Berlyn), while the talented younger staff does the heavy lifting (in this case, G. Kevin Wilson). From my interview with Marc Blank, he made it clear that it was a few weeks of work for him and Berlyn, along with some follow-up concalls to answer questions or add additional material as needed. This is how it went, and how I would think any future work with the original implementors would go.

I don’t think any of the creators have lost their touch – every one I talked to for the movie was bright, engaged, hilarious or thoughtful as per personality, and would no doubt be a joy to hear from in a creative manner, be it text adventures, or, frankly, a Q&A session. Faced with the challenge of writing something new, and with someone else assigned to do the dreary pick-up work with coding/development, they’d all be fine at it.

Here are some problems:

First of all, time. Multiple implementors have moved on to pretty time-consuming jobs, meaning they couldn’t just blow months working on a project, or even weeks. While a lot of the aspects of making a text adventure have been sped up (especially for QA and playtesting, where programs exist to jam through and find bugs at amazing rates) the whole ‘writing and composing puzzle’ thing would be a pretty involved experience for them, so they’d have to work on it when they could. Some are retired, certainly, while others are not involved in jobs that would prevent them from, say, blowing a few weekends on the project. I say this, fully aware that Kickstarter provides the role of Deranged Millionaire, who will pay untold sums for an infocom game, whether reality would allow one or not. I suppose everyone has their price, and faced with a hefty fee, the Infocom imps would probably be convinced to spend a little time working out some craft to make a text game, especially with the aforementioned “heavy lifting by younger staff of devs” approach.

Next, the resulting product would very, very unlikely be anything like an Infocom game as people know it – the characters and the worlds are still technically owned by Activision and they’re unlikely to loosen up any grip on them with wasting an enormous amount of money of good donating people, money that should go for, say, a gold limo for Steve Meretzky. Perhaps a game where parts of it are each lorded over by a specific implementor, say, a swamp section done by Stu Galley and an insane asylum overseen by Amy Briggs, might work. There was only one game under Infocom done in anything close to that model, and it was Bureaucracy – and I’m going to pull from my informal conversation with infocom writers to tell you that game was truly and completely hated from the inside.

I’m not saying the whole thing is a terrible idea that could never come to pass; I am pleased that we now live in a miraculous time where it’s not just possible, but feasible to raise the funds to convince the infocom alumni to go for it.  But I question what the whole idea of an “Infocom Game” truly was and is, and whether what came out the other end would satisfy the wishes of those for whom those two words are magical.