My somewhat legitimate position in the world as speaker, historian, archive dude and rabblerousing mascot means that it probably doesn’t do me any favors to do my really too easy to do slam of other people, out of the blue. But you know, sometimes I can’t help myself.  I wrote about this, sort of, a while ago. But I said I wouldn’t do the jib-jabbery thing. Now I will do the jib-jabbery thing.

Way back when I was working on the BBS Documentary, in fact, before I was even shooting, which makes it around 2001, I knew that I needed a lot of help on the back-end when it came to research.  So, besides reaching out to Slashdot, I also brought in a lot of friends and made myself very available. This availability went on through the entire three years of shooting. One of the ways was a mailing list called “Co-Sysops” where I had a bunch of computer types who knew their stuff, and I’d fling out an obscure question like “What was the highest baud you can make a USR do” or “Does anyone know who wrote X” and then, more often than not, people answered. One of the people on this list was Brian Dear.

It would be really good to present the scale of the endeavor. With no previous major filmmaking experience, I had assembled a 500 person list of “possible to interview”, hundreds of my own “definites”, and, over the course of filming, sent out something like 3,000 e-mails. Really. The resulting epic was, in my mind, a miracle that it actually happened. And to this day, I get mail from people stumbling onto it online, or through the website, or any of a bunch of other ways, and the general consensus is “oh wow”, with a dash of “wtf”.

Now, during this time, Brian Dear explained he should be one of the people to interview. He lives just outside of San Diego, and twice my travels took me near there, and on two occasions, I mailed him about an interview. No response. Again, keep in mind he was subscribed to the Co-Sysops list, which itself had me going “I’m heading out to ______ for a week to film.”. In other words, he had an enormous amount of chances to make it happen. I was very confused by this all at the time.

So the movie finally came out in May of 2005, a happy time all around for me. Happy, that is, except for one or two annoyances, specifically, a spontaneous appearance from Brian in the comments about the CD.TEXTFILES.COM project, where he says:

“Still mystified why Jason seems to have decided to exclude the whole Coconut story from his BBS Documentary. The Coconut era (COCONET, CocoTalk API, CocoMedia; radically different software from everything else on the market at the time — client/server architecture; EGA/VGA graphics only, with eventual Mac/Win support; first BBS to offer embeded graphical emoticons, which are now so common on web-based BBS’s); Unix-based, not DOS/Windows based) is an important chapter in the whole BBS drama, and no matter what the excuse, his history project will remain incomplete without coverage of it.”

ANYWAY, the reason I bring this up is because Brian has his own little favorite subject, that of the PLATO system, which the BBS Documentary does mention and which is quite an enjoyable little history of its own. Enjoyable enough, in fact, that Brian decided to write a book on it.  In fact, he’s been working on this book for years and years and years. In at least one bio he claims 20 years of research, although if we’re going to play that little game I’ve been doing BBS research for 32 years.  Regardless, he’s been working on it for FOR-EVER.

For years, the only updates on his regular site about this project was to mention when someone he’d interviewed had died.  However, he eventually did come out with a date: the book would be released Fall of 2010.

Well, it’s 2011. In the time since Brian slammed me for having an incomplete history of BBSes, I shot, edited, and released another film and now I’m shooting three more. The Computer History Museum has switched from the Visible Storage structure they had to an amazing, world-class museum setup of their materials. (I got a tour this year. Trust me, it’s worth going to if you’re within 100 miles of the place. A 1000 miles!)

Why am I saying all this? Like I said, it doesn’t help me all that much as I work on all the stuff, but every once in a while I see this dude’s name, I see that the book covers something other people haven’t covered, and something in me just snaps. The world is full of people fat-fingering their cheeto-stained keyboards with how you’re failing to be perfect, not achieving your potential, and that you shouldn’t have even tried.  The advantage of them all dying in a fire is how long the fire would burn.

Hopefully this book will come out soon – I’ll be sure to get a copy.  Until then, I’m going to get actual shit done. 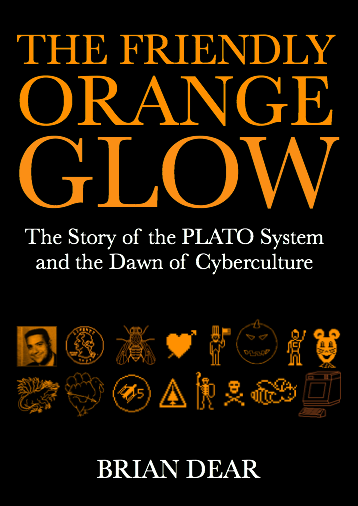