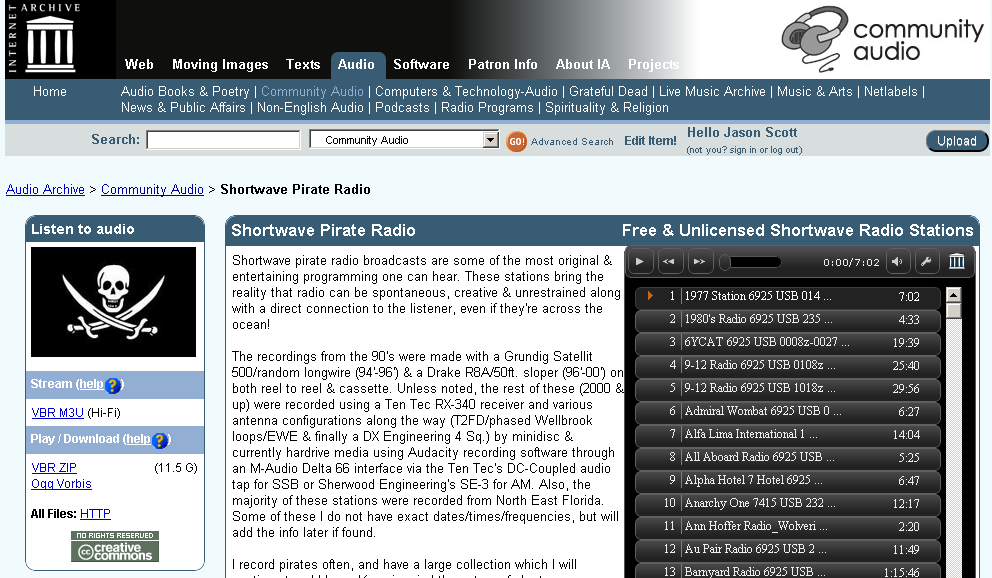 Part of my work with the Internet Archive is writing weblog entries about parts of the whole crazy collections they have to expand knowledge of the mission out to greater realms of folks. I considered writing one on this exhibit/collection but decided it was just a little too far this side of weird, so it won’t go on the official Internet Archive weblog, even though it really should.

Since the 1990s, a fellow named Sealord has been recording pirate radio broadcasts coming across shortwave bands. Without authorization, license, or any sort of oversight, all manner of folks have been broadcasting illegal but probably not overly immoral shows out into the air. This collection, which is over 11 gigabytes and counting, has hours and hours of radio broadcasts, crackling with the sound of distant voices shouting over static and electromagnetic corruption. With names like XYZ Digital Pirate, Wolverine Radio, Whispery ID, Thinking Man Radio, The Voice of the Last DJ…. you’re talking some strange and mysterious personalities out there. (I learned that this beautiful, terrifying thing has been lurking on Internet Archive’s servers from Corqspy.)

Clicking on them is, of course, a total crapshoot, just like if you’d dialed into these places from your rig. And there’s just so much of it, I have no idea what you’ll find buried in there. But what a miracle it is that someone would take the time to record them, record when they got the shows, and then we’d have something like the Internet Archive to allow people to browse this stuff far beyond its ethereal nature and point in time!