This is not related to my announcement that I will announce another couple films.

Having finished two major projects in documentary, especially technical documentary, means I hear an awful lot about other productions of a similar nature. Most are tiny one or two-person projects, involving one driven individual and their buddy. Sometimes it’s more involved than that, but not by much. In terms of contacting me, some just want me to know they got inspired by what I did. Others are seeking advice or some level of assistance.

As time has gone on, some of these projects have caved, others have thrived and been released. I know some are in the final editing stages while others are a pile of tapes and a fleeting memory to the creators.

One in the danger of being in the second group was The Two Hands Project (or Two Hands Project), which was a documentary on Hackerspaces and the Maker Movement filmed by three fellas across a month utilizing the Jet Blue All-You-Can-Jet pass (the one I was inspired to buy a year later for my own Jet Lamp tour). During this month (September 2009), Bilal Ghalib, Jordan Bunker and Paul Jehlen flew to a hell of a lot of hackerspaces to talk to them about what makes their spaces tick and what sort of folks would be interested in hanging around making stuff. They were assisted by other crew at various locations. They filmed over 50 hours of footage, including some of me and the space I’m associated with.

Then September ended. Then it got quiet.

Too quiet, as it turns out. I started checking in on things about a year later, poking them to find out what was up. Scant response, until I got the word that yeah, things were not looking good. The stuff was shot but it was thought maybe it could be used as some sort of fuel for a new documentary about hacker spaces being worked on by one of the original crew members. As someone who has seen where this was going, I didn’t like it at all.

So I offered to edit it. No strings. I’d make a movie out of it. They (and by they I mean Bilal, as he had the tapes) said yes.

A few weeks later, the entire contents of the Two Hands Project ended up at my house; roughly 50 MiniDV tapes, a hard drive with photos and footage, and a lot of work to do.

Obviously, I have to prioritize on my own projects, but I think we can get things in better shape sooner rather than later. Here’s some shots from Two Hands, in case you’re wondering what it looks like: In other words, a standard-definition handheld set of video shots of people working in their clusters of like-minded folks in buildings all over the US and Canada.

So, the bad: the interviews are often handheld as well, which means they shake back and forth while someone is speaking (I note some later tapes got a tripod in the mix). The sound bounces back and forth from really good to “HEY OVER THERE” in some places. In at least a few cases the sound wasn’t turned on, making the interview completely lost. This was obviously done by people with scant filmmaking experience in the realm of the “make it look and sound good” side of things.

But the good: EVERYBODY is in the fuckin’ film. As far as the linked hackerspaces.org crowd goes, they really went all over, and while I’m sure there’s plenty of spaces they missed, the geographic spread is breathtaking; I’ve seen footage from Atlanta, Boston, DC, Toronto, Buffalo, NYC, Rochester, Washington DC, Baltimore, Ann Arbor, Seattle, Los Angeles… and many of these cities contain footage from multiple spaces nearby. They didn’t shy away from walking around locations while people did stuff, filmed a bunch of environmental/surrounding area shots (although often with crazy shaky-cam), and didn’t let too many people slink away in the shadows while the cameras were coming through. And the questions are wonderful – as one of the interviewees I can say they really did a great job pulling out stories and statements from their subjects, and folks give out some real fantastic answers.

The raw footage is a real rich tapestry of human beings and their spaces. There’s faces of people I myself recognize from years of hacker conventions, who I never got a chance to meet. I guess “I edited you in a film” will be a good conversation starter.

Here’s the gallery of screenshots I’ve gotten so far while transferring the DV footage from tape to hard drives. It’ll keep growing until I’m through all 50 tapes, i.e. 50 hours of footage. There’s more hours on a hard drive they sent along. I’m backing everything up. 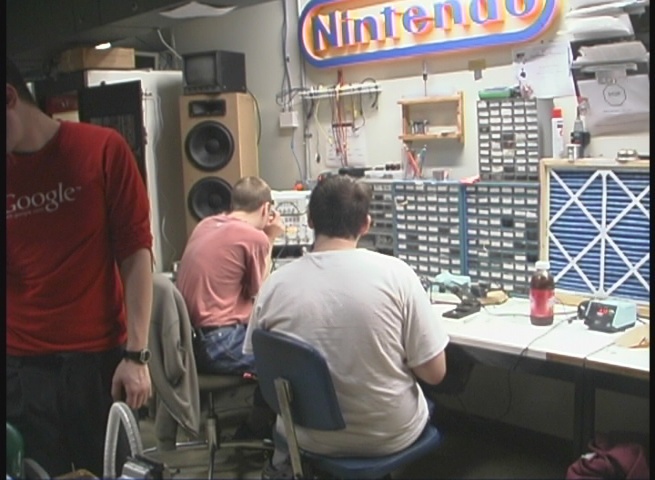 I’ll edit this like I’ve edited the rest of my work, by taking these raw digitizations and converting them into banks of clips. From the clips, I’ll start bringing things together, figuring out what goes where. Because it’s me editing things, the film will probably shift more towards the “everyone is part of a greater whole” spectrum than “let’s do a travelogue”, but you get what you pay for.

Let’s not quibble about deadlines, futures, and what will be done with this work when it’s done being edited. For that matter, I must point out again that I am not the director of this film, and it’s not a “Jason Scott” film – the subject is dear to my heart and I am glad to bring my skills to the project but I was never going to make a hackerspace documentary and I was certainly never going to go to all the places that these guys ended up. This is their film, their brilliance to ask what they asked and where to aim the camera, and to put in the real and brutal hours that month. I am sure it was an amazing experience – it was for me when I was working on the BBS Documentary.

One of the original crew, Jordan Bunker, has gotten involved with a new project called ReMade, as the producer. If you go over to the site you can see that this is a miles-better-made documentary they’re working on, obviously utilizing his skills and connections into the making of it. So I am going to stress that if you want to see a world-class documentary on hackerspaces, that is the one you want to fund. They’re taking donations over on that site to get things done. They’re making a real professional go at it and I’m taking a strictly amateur production and making it watchable (and enjoyable, and flowing and all the rest of the things an editor does). The two films are about the same subject to some extent but they’re not going to end up being the same film at all. Support them. I’m giving my support to this one. Everyone is going to win.

I’ll occasionally discuss this project if there’s something to be learned from the process of editing it, or if I think someone needs to hear about some discovery or breakthrough. But for now, just know that I am working on this in my spare time, like a racer who spends a little time with the kit car in the back of the garage.

It’s a hell of a kit car, guys. Great work. And thanks for letting me tinker with it.