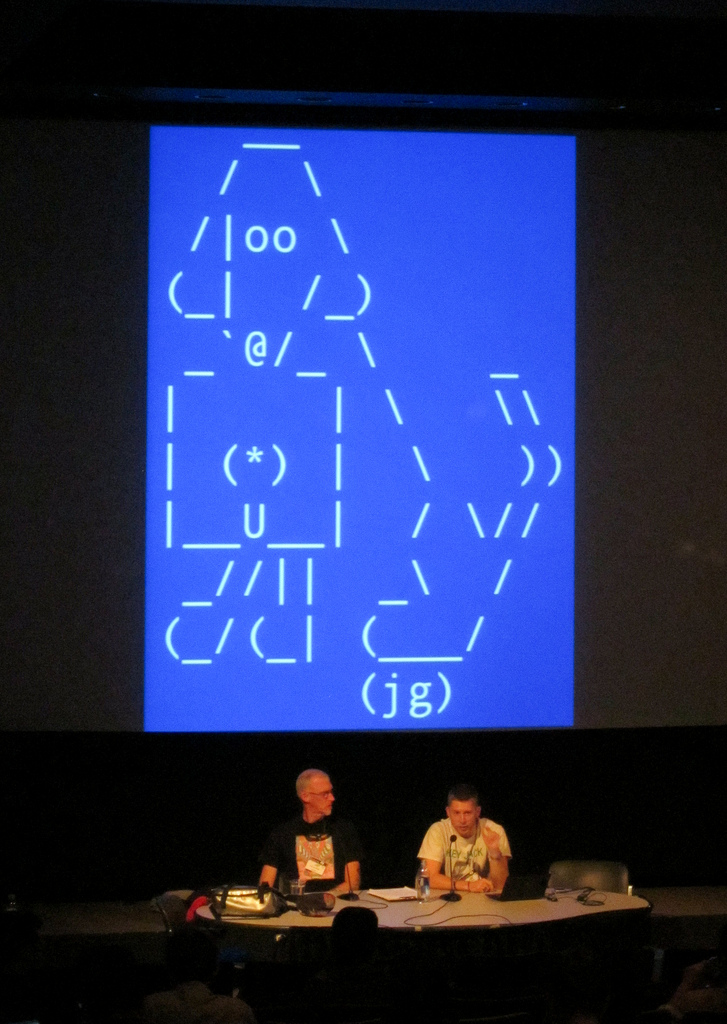 It’s my own unfair bias, but my preferential talks for ROFLcon center around history. Usually, it’s me up on stage with those guys. Sometimes, though, it’s not, and in one other case during the event, there was a pretty amazing panel that took place that I wanted to highlight. There were plenty of other great panels and I highly suggest checking out the writeups on them about ROFLcon’s site, but history is my thing, and man was this presentation about history.

I’d write a huge biographical sketch of Tom Jennings here, if it wasn’t for the fact that I already wrote one a few years ago for IMDB, so let me paste that here:

Tom Jennings is a technological jack-of-all-trades, whose work is both in learning and making computer history. His name is most associated with Fidonet, the ad-hoc volunteer-run computer network of bulletin board systems that at its peak numbered in the tens of thousands around the world. However, his influence spans well before and after his work with the Fido BBS and its network. From the 1970s on, his career was involved in various programming, from Ocean Research Equipment and Bose to Phoenix Software Associates, maker of early PC Compatible BIOS chips (where he was the first employee). Other jobs have included work for Apple Computer, Wired Magazine (where he was their first webmaster) and The Little Garden, a ground-breaking Internet Service Provider that provided resell-able internet access far in advance of most companies that would do so.

But it is Fidonet that brought Tom Jennings fame (if not fortune), as his work on a Bulletin Board program for microcomputers in early 1980s took a technologically revolutionary turn with the addition of a networking component, called Fidonet. With the assistance of Ken Kaplan, Ben Baker, Thom Henderson, Tony Clark, and many others, Jennings designed and re-designed the Fidonet network so that messages could be passed between distant computers for relatively inexpensive telephone charges. The “mail hour” between Fido BBSes was early in the morning until the volume of messages required the ability to pass data at all times of the day. Jennings constantly rewrote his software throughout the 1980s to accommodate improvements in protocols and specifications, and the “fidonet protocols” were implemented in many other Bulletin Board Software packages to interact with the growing network.

By 1994, Fidonet had reached about 40,000 nodes all volunteer-run, when the availability of the Internet began to eat away at its numbers, until only a few thousand remained within a couple of years. Fidonet is still in use in solid numbers in countries where broadband or even Internet access is still limited, but has faded from the United States, where it began.

Jennings himself stayed in the fray of Fidonet’s operation and maintenance for roughly a decade, but his interests soon drifted into other fields; he founded a skateboarders’ rights group called Shred of Dignity, and was co-editor (with Deke Motif Nihilson) of a queer punk skater zine called HOMOCORE, which ran for seven issues. He also began taking an interest in recounting computer history far before the microcomputer revolution of the 1970s, tracing back advances in computing science of the 1930s and 1940s, where his writings and works have primarily focused in the past decade. He speaks on a variety of historical and technological subjects on a regular basis.

Tom was one of my favorite interviews for the BBS Documentary. He knew his stuff, was passionate about talking about it, and had strong feelings about why he made certain choices over others, which contrasted nicely with his contemporaries I also interviewed.  It was a great time all around, and I think the Fidonet episode is fantastic because of him.  So much to work with!

But it wasn’t my idea to bring Tom into ROFLcon – that was the work of Kevin Driscoll, who had been interacting with Jennings out in LA and was inspired to ask him to be on the panel. And by panel, I mean interview setup.

Kevin asked all the right questions. Again, I hope they get the audio/video up soon – it’s worth it just to see Tom focused into a Q&A and covering pretty much all of his major touchstones. The ROFLcon tracks were split into four at this point, and the other tracks had some mighty tempting stuff going on, so it was a smaller audience than I thought it deserved. Tom almost never comes to this area (he was born here, didn’t enjoy it at all) so it was a pretty rare event all around.

People might not know it, but there’s a very nice collection Tom gave me during the time we did the BBS Documentary interview. I call it the Tom Jennings Collection.  There’s some pretty great stuff in there, if you dig around.  Start with “Controversy”. The filenames are Tom’s.

I bumped into Tom at the pre-show drinkup and a couple times during the event. It was, as it’s always been meeting him, far too little time.