It’s nice to be reminded of how many people are looking out for me and my interests.  A few weeks ago, while travelling, I got mails, instant messages, and pages that there was some sort of “BBS Game” out there, and that it thanked me, and that it was based on calling into BBSes. I thought that all sounded neat, but my game-playing time is limited, so only recently did I sit down and play it through. 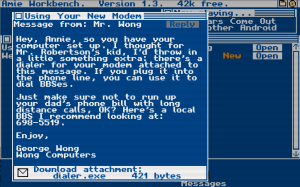 The game is called “Digital: A Love Story”, and is available for free for Windows, Mac, and Linux.  And as a few people pointed out, it’s quite an intersection of the subjects of my two documentaries: BBSes and Interactive Fiction.

Through a clicking interface, you find yourself at the desktop of your brand new Amie machine, and the kindly sales guy (and I do remember these sorts of guys) provides you with a dialing program and a phone number of a local BBS. Naturally, you try it out, and you set out on quite a fun little adventure. By the time you’re done, and it took me about two hours to be done, you’ve done an awful lot of stuff, met a wide variety of people, and probably done quite the good deed or two. I’m not a big fan of spoilers or giving away too much, so to the question “is it worth playing”, I’ll just answer “yes, even if you get frustrated at various points, because it all wraps up nicely”. For most folks, that’s probably all they really need to know about the game, but I’ll add one other bit; in the game, like Gordan Freeman in Half Life 2, your character is silent, so when you hit “reply”, that’s it – you simply “reply” and they respond as if you wrote a letter or e-mail to them, usually providing the context of your reply in their responses. That may seem weird to people, and it took me a little while to catch on, but I completely understand why the author did it.

So, here’s the thing. The author, Christine Love, was born in 1989. This takes a while to sink in.

This means she was 8 years old when I decided that BBSes were in danger of not having a place on the web and I created textfiles.com. This means she was 11 when I thought, “gee, someone should make a documentary about BBSes”. By the time she’s in her teens, BBSes are a laughable joke or a fond warm memory for the vast, vast majority of people who used them – and a meaningless term, one to skip over in writing, by many others.

This means Christine isn’t writing a simulator or a documentary or a report on BBSes – she is using them as a source of historical fiction. Within a very short time in the game, stuff happens which does not generally happen on BBSes, and the interface is a ton more easier to use, and a whole other bucket of niceties and shortcuts are in effect in the program, because she wasn’t alive to experience these things. In the credits for the game, Christine thanks “textfiles.com for much valuable research” . In other words, this means she accessed textfiles.com purely as a reference library – one to gain some understanding of writing and styles and possible characters for her game. By any standard, this would mean that the black monolith of textfiles.com just sent a signal from Jupiter. The amount this makes me happy is almost beyond measure.

I’ve read occasional reviews with folks poking at this point or that point (one young scamp said the game was inaccurate because some of the messages seem “slapdash” and that “we always worked to write thoughtful messages”.. an excellent way to show their ignorance to history) and to be sure, this is not a simulator of the BBS era.  It is, as I said, historical fiction, and no historical fiction tends to be a perfect re-telling of the time it’s from, especially when it has characters in it that didn’t exist at the time being referenced. She glosses over some things and focuses a lot on others, and shows her age with “Hacking the Gibson” in a 1988-era work – but what the fuck, people. Look at me, I’m historical and archiving reality boy, and I’m telling you it’s all going to be OK, and if you’re playing the game and getting pissed at how compiling is portrayed, you are boring and I hate you.  Go be boring about something else – Christine did something great here.

I can certainly cite earlier historical fiction with BBS lore and materials – one set that springs to mind are some zine files from the 1990s in which many slavish references to 1980s BBS comings and goings are portrayed as both actual events and as the seed for fictional narratives. However, there’s only been a few games out there that have tried to capture the zeitgeist of being online, and this one took my library for research.

Could this all have been done better? Oh, sure. Everything can be done better in this world.  But the author decided to tell this story using a very fun computer interface, with you doing all sorts of computer activities to find the story, and there is one part in this game that found me dialing up a range of BBSes looking for messages, seeing if anyone had called and left something since I was last there. For a few seconds there, in other words, I was really and actually 15 again. And how much is that worth to me?