OK, so if your printer is attached to your computer and you want to move your printer, detach the printer from the computer. Otherwise, this happens: As it turned out, the computer didn’t even disconnect from anything as it flew down and bounced off the scanner, but the anti-piracy technology of XP noticed the voltage wavering and crashed. (Most people don’t remember that XP has this “feature” built in, because they either made the routines good enough that it doesn’t trip false positives that much, or they did it wrong and it never trips positive unless you’re the kind of pirate who throws his desktop computer off a desk). Since the machine was down anyway, I went and got a 2 terabyte drive and installed it internally, and now I’m putting 1 terabyte of GET LAMP data on this drive so everything’s internal. Note that I’m putting this data on the drive in the form of folders representing each USB drive, so I can continue to back up. This little misadventure means I can sit here and write some stuff to you while the drive’s syncing.

And it’s been a while, hasn’t it? I mean, really. Here I am full-time and you’re not getting the essays and information you normally get through this weblog. I have to blame the movie which is currently being transferred to this new drive.

The movie’s not quite done but it’s very close to done, now. There are parts of the 2-DVD set that are completely done, I’ve been fixing up sequences to give them a little more bounce, and I’m making all those hard choices that come from taking 120 hours of footage and making it less than 4. Even more than BBS, the raw interviews are really wonderful, and I will shortly be dedicating a machine to getting all the interviews on archive.org. For both of those films.

The weblog over at inventory.getlamp.com has been pretty active, letting you know about things like the artwork, the cover, the coin and other related information.  But let me speak to the production itself. 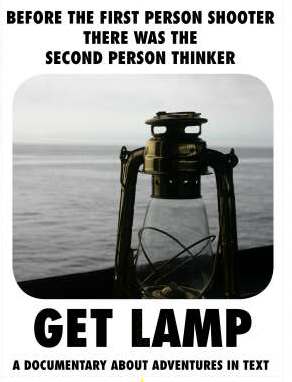 Post-mortem wise, this thing took way too long to finish. It didn’t take too long to film (2 years was about right) but it took another 2 years to complete, and that was way too long. A lot of it came down to my day job, which changed from a normal endeavor to a pretty terrible one for about a year. Combine a truly terrible customer with an overpromised support package, and the fact that the company had been maneuvering to get rid of me for some time (I believe I was one of the top-paid engineers at the company due to different salary structures and being acquired by said company) and the environment was basically toxic and doomed. Once I was out from under that rock and saw the sunshine again, my life has improved and finishing things up took a lot less time. The end result, though, was that people had hoped they’d see this in early 2009 and it’s coming out in 2010.

I think the movie is weird and unusual and people will generally like it and find some parts odd – I also think different people will find different parts odd. I also am now pretty much aware of my filming/editing “style”, and so if you liked most of BBS you’ll like GET LAMP because my unique mark and approach is quite obvious in this film too.  I do not mind having a limited audience, because that limited audience tends to really enjoy the work, as opposed to an audience that might be larger but will forget what they saw 2 days after they saw it. If I want general appeal, I’ll make more cat movies.

I did a nice interview with a game magazine about the movie and the interviewer wondered if the movie was for insiders or people familiar with the subject, or if it had a general appeal, and since I’m not owned by any particular entity I would have to say it’s primarily for insiders or people who were vaguely aware there were such a thing as text adventures. If you don’t like computers or don’t like technological self-consideration, you won’t like my film, but you won’t like a lot of others either. I assume you used a computer, and liked it. That cuts out a lot of people who might have unknowingly used computers (have cell phones, drive with a computer inside their car’s hood, played some games with the kids) but don’t think of themselves as computer users. It’s a nuance, but I think it’s important.

The movie is about our relationship to story, about how wonderful game-playing can be, how ingrained experiences can become when we regard them from a new position, and about how cool cave exploration is. But it’s all these things presented in a very strange way, with a lot of interesting distractions and side-paths. That’s how I see it, anyway. Others might have other opinions and I look forward to seeing them.

The next documentary, I promise, will take nowhere near as long. I registered the domain a little while ago and I already know where it’s going with stuff. It’s another huge one, and again, I have no fear that anyone else is going to be breathing down my neck while I do it and it will probably be the only documentary on the subject, even though everyone will know it.

But meanwhile, this one’s coming out and I expect there’ll be a lot more to say about it over time.

GET LAMP will premiere at PAX East, March 26, in Boston. An unbelievably large interactive fiction contingent will be in attendance, and there’s a panel I’m hosting right after the film.  See you there.