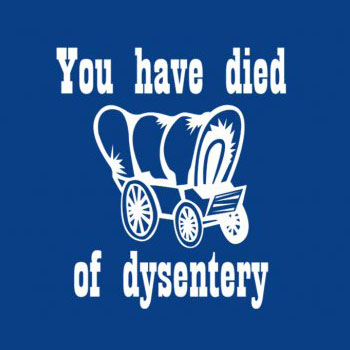 So, there I was editing a movie and being a historian. Around Tuesday, I started to feel a little unwell. I decided to take some rest. Later in the day, though, I REALLY felt unwell, and began a torrid lost few days involving a bathroom, an overused bed, and quite interesting dreams. After a few days with greater and greater pain, I checked into the hospital.

After a battery of tests, I have been told I got dysentery.

The best guess is undercooked meat. I’m pretty bad about cooking snack meat all the way through, and the lottery finally ran out. I’m now on antibiotics, I did not contract something really killer like E. Coli (that was what the battery of tests were) and I will probably be discharged out of the hospital later today.

That’s a few days I didn’t edit, so deadlines on the movie are coming up. I will be redoubling efforts. I was able to do some non-editing business for the film in my hospital (free wi-fi!) but other than that, it was a very unfortunate time in the penalty box, and I have definitely had better weeks.

Some of my weblog entries sit in a simmering state while I look them over, so this year has looked decidedly thin for posting, but now it looks really thin. Will do my best, but the movie must take priority. I have a lot of people waiting on this thing, and I want it the best it can be. I’ve assembled a great team of people working with me on the finishing moves, so it’s going to be something else.

Anyway, the moral of the story is DO NOT GET DYSENTERY. If I save one life with that advice, it was all worth it. Dysentery, kids. It’s not cool.