So, in scanning thousands of pages of Infocom history, the next question is what use this all might have.

As it stands, I can give an extremely obscure example. Likely you’re going to be left with the same impression you previously had; that is, you will continue to think what I’ve been doing is a waste of time or an excellent choice. But let’s go with it anyway.

I was alerted to this weblog entry in which someone sat down with the feelies (included extras) for the Hitchhiker’s Guide to the Galaxy game, and translated the “alien language” of one of the documents. 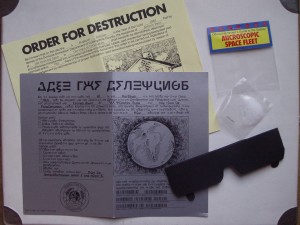 In his weblog posting, Mike Schiraldi figures out this document is a simple cryptogram, and sets about translating it. As it turns out, the cryptographic message is riddled with errors and kind of random. He does not concern himself with speculation as to why this is the case, and why phrases would be in the document like “destroyed andotherwi se transformed into nondescript heap of pulverized rubble”, broken syntax and all.

I have an advantage over Mike, having scanned Steve Meretzky’s excellent documentation related to this game (and his other Infocom works, as well). I don’t think this really needs to have Steve be bothered with asking him why things were like they were – instead, I just looked at what was scanned in and here’s my two cents.

Much heavy lifting in design, layout, and verbiage for Infocom was done by a firm called Giardini/Russell, Inc. out of Watertown, Massachusetts. In fact, let’s just make it clear – a lot of what people think of as “Infocom” is in fact Giardini/Russell.  For example: The Zork logo, the names Infidel and Deadline, and, of course, the verbiage of the advertisements I previously discussed.  They wrote manual copy (some of which was then re-written by the implementors) and a pile of other stuff. The story of Infocom’s success, for all its considerable talents, is incomplete unless you realize this firm that contributed so much. (The firm was acquired in 1993.)

What the scanned documents show is that anything from completed ideas (full maps, paragraphs of writing, lists) to barely considered thoughts would be sent over to G/R, who would then pull together ideas and prototypes for Infocom to look over. Some of the Implementors appear to appreciate this additional input, while others resist it. And sometimes, like this case, they do work which ends up in the final product.

On July 5th, 1984, G/R sends over a draft of the Order of Destruction for Arthur Dent’s house. It’s given to Steve Meretzky to proof and send back. Among this draft is the phrase “Domicile Demoltion Department of Randomshire County”. Steve crosses out “Randomshire” and puts in “Cottingshire”.  (The book doesn’t mention what town the house is in.)

The final Order Destruction included in the package, therefore, says “Cottingshire”. But as Mike’s translation shows, the text in the alien document is “Randomshire”, the original draft.

This is a very strong indication that the choice to do the alien document as a vaguely cryptographic puzzle was done by an artist/writer at G/R and not Infocom. The choice of first draft language not used in the final draft for the home destruction order bears this out.

Is this important? Important’s a funny word. I think it demonstrates the layer of independence that G/R had in making some aspects of Infocom creations, and where the idea/creation likely came from. This might clear things up for people down the line about other aspects of Infocom, or how ad/PR agencies could work, and so on. So I think it’s helpful, and not unhelpful to have this extra information.

When the scans become public, I hope many such little things will come to light.

By the way, a spectacular weblog entry about included packaging in Infocom games (the feelies) is at the sceptical futuryst.