As one might spend a lot of time making a collection as good and complete as it can be, I’ve decided to take one of mine apart. But I thought there might be some education or smirking memories as to how this collection occurred in the first place, so let’s just cover that a bit.

For a couple years, I collected energy drink cans.

Energy Drink Cans, as I define them, look like this: 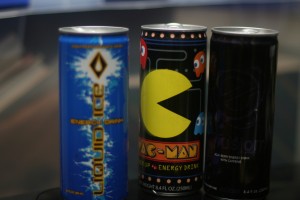 The cans are all a little more than 8 fluid ounces in capacity.  They all indicate they’re full of special stuff that will make you work harder or smarter (or, later on, claim they’re more healthy or maybe just soda). And they’re all pretty expensive, usually ranging from $2 to $5 a can.

I won’t mince words. These things usually taste pretty awful, like the bombs have dropped and someone is asking the Bev-O-Tron to compose whatever those smiling people in archived commercials were drinking, but BOT only had motor oil and recently dead people to work with. I would usually open one up, swish a mouthful, and either swallow it quickly or spit it into the sink. Drinking all of them was usually not on the agenda.

What has fascinated me about these things is they’re rife with charlatans, and a beverage fad that I am sure will be on its last legs within a decade. I can’t imagine us continuing to buy these things in 10 years, when all the ill health effects come out or someone dies from drinking six thousand of them one weekend.  They often have amazing bright colors, photoshop gone wrong in a big way, and claims that would make a zombie Barnum spit out his snake oil and start lawsuits.

Oh, and they love stealing stuff. Check out this suspiciously-like-a-browser-logo label: 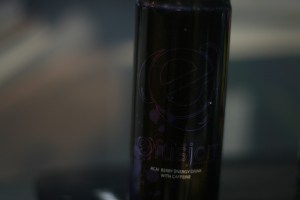 (Sorry it’s so dark – it’s just a very dark logo to begin with.)

All sorts of chicanery belies itself throughout my hundreds of cans. Labels that look like a desert, like a cartoon, like ammunition, like fireworks. They all laud having vitamins or Taurine or god-knows-what terms among them. You are expected to somehow come off stronger and healthier for downing these poison capsules. And the fact there are hundreds indicates many believe so.

There are likely historical lines further behind, but for me the story starts with Red Bull. I was working at Psygnosis in 1995 and we had the first betas of Wipeout stop by the office, still being worked on and with terribly dodgy graphics generation (flashes shot up and down the track from faces not lining up). But the game was obviously out to kick some ass, and the fact that you could go so fast and come to a screeching halt by your own lack of skill was kind of refreshing. A lot of driving games, and I mean a lot, are kind of like playing a big fat game of shuffleboard, where you bounce harmlessly down the track just edging people in and out as the AI tries to keep it all ‘fun’. In Wipeout, failure to execute meant you were left behind and would never catch up.

On the billboards above the track were ads for “Red Bull”. I remember this distinctly, thinking “Oh, what a shame they had to make up a drink instead of some actual drink.” I had never heard of Red Bull. At all. It was completely foreign to me.  According to this site, the feeling was accurate – Red Bull wouldn’t make an appearance in the US until 1997.

But Red Bull changed everything. Here was this crazy drink, full of caffiene and who knows what else, supposedly able to give you energy. And it was in this very uniquely shaped can for a soda. And it was fucking expensive. Super expensive. At a time when soda was on a downward price trend ($0.99 for a 2 liter bottle of the usual crap) they were jacking it up, way up, into the multiple dollar range. For less soda! Wow!

Here’s the thing, though.  People paid for it! Way back when, there was this awesome urban myth that Red Bull contained Bull Semen (where “Taurine” supposedly came from) or some variation of Unexpected Bull Portion. Red Bull did very little to dismiss this myth. It grew and became a club mix drink. It took off.

And that’s where my collection comes in.  It’s the form factor that really makes me enjoy them – these small cans with expensive costs and crazy names. I recall enjoying, for example, “Pimp Juice” in Salt Lake City in 2004. “Cocaine” energy drink, shut down and then returned to market. And, of course, “Firedog” energy drink, named after the tech support desk at Circuit City. That’s right, energy drinks to commemorate tech support.

So I’ve been collecting this stuff for years. But in the present day, the goal is to focus on what makes sense to have, and to archive things properly, and archiving cans is crazy. So I’m going to be taking photos of these things, then donating some to the energy drink museum, and whatever else will go into the great metal beyond.

I will be sad to see them go, but you have to make the right choices. I archive computer history. There’s a lot of computer history, and some of it has been hard to find, and get online. Energy Drink Cans are their own thing. I think that others could do a better job and focus on that. I should be putting my efforts where they belong. And somehow, this doesn’t seem to have been it.

Now, if you excuse me, I think I’ll pound a few tiny expensive cans back and get back to work.