Spent a nice little day (or part of it) at XORcon, an impromptu (by most standards) conference held in an august Harvard hall, and in which a few dozen people listened to a few other people talk about a range of eclectic subjects.

I took some photos, but they’re pretty universally terrible. Here’s one to give a rough idea of the layout/room: 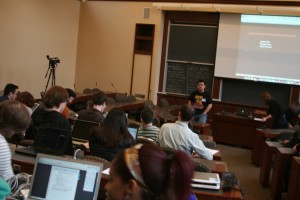 I was impressed with the setup of this classroom/lecture hall; everyone had their own power outlets and every seat had a microphone from which to speak into if they so chose, allowing immediately back and forth without shouting. It must have been a pretty penny to outfit this room;Â  I’m so used to the absolute shittiness of educational facilities that this was kind of Utopian for me.

Subject matter was varied, as per the whims of the organizers, and was single track.

Somewhere in here was Kevin Driscoll, who I met previously in various unusual places involving Mark Hosler and free culture and the rest, and who co-authored this neat little thing:

I question the wisdom of an academic/historical work linking to Youtube, but for the moment all the links function, so you in contemporary time can go ahead and enjoy this spectrum of introduction to the various aspects of Chiptunes, within a videogame context.Â  (You might also want to read This academic paper by Karen Collins, if you’re into this sort of stuff.)

Miss Diana Kimball gave a talk on the process of archiving, about 15-20 percent of which I agreed with, and A.J. Mazur talked about the depravity of video-game game shows and portrayals of videogame competition in movies. I piped in with my usual historical blather, but I don’t think where he was going with it matched what I was getting at.

I had to leave early because of a work-related incident, which broke my heart, but I did catch part of a talk over the webcast (which unfortunately, had terrible sound and so I got none of it).

In all, an excellent day. I wish more stuff like this happened in my life.