Oh, what a treat. To make this book review and accolade more interesting, I will be peppering it with lessons I learned or re-learned from the authors in bold and italic. Lessons re-learned are even more important than lessons learned. 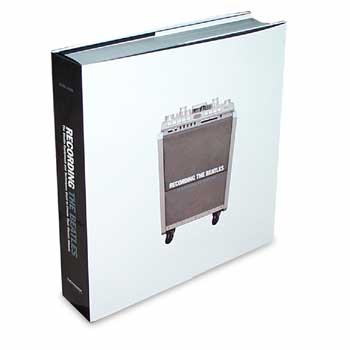 The creators of the book Recording the Beatles stopped by the public library in Boston to talk about the process of making their book, the things they learned, and some funny/interesting stories that happened along the way. Let’s assume you know nothing of this project or anything and step through it.

Two guys, Kevin Ryan and Brian Kehew, launched a project (separately and then teaming up as time went along) to document the recording process of the Beatles albums, primarily at Abbey Road Studios. While you might think this has been covered in great detail, in fact it has not. Find a subject that people think has been covered, but not really, and begin researching it exhaustively. While other books might discuss the Beatles themselves or Sir George Martin in terms of recording the albums, in fact there was a massive army of engineers, maintenance, and assistants who were doing the actual hands-on of implementing what the band wanted to achieve acoustically. While some of these people had been interviewed or had things discussed technically, many had not. Ryan and Kehew were exhaustive in talking to dozens of people over years to get input about aspects of recording. When all was said and done, they’d spent fifteen years, off and on, on this book.

The book takes the attitude of “what do you need to know about how to record like the Beatles were recorded”. They reveal a lot of the custom hardware, unusual techniques, and at-the-time-experimental approaches to sound the various albums were recorded with. The EMI recording studio that we call Abbey Road was primarily used to record Classical and voice recordings, not pop albums, so when these hit-makers were brought into this facility, it was like installing, oh, let’s say in-his-prime Richard Petty into a space shuttle. This unusual amount of capability behind a pop group was a big contributor to the success of the band’s recordings, and as they became a studio band, one they took advantage of greatly.

The book contains drawings of the studio in many different configurations, diagrams explaining what every single piece along the recording line did, and how the various techniques changed as they moved in recording technology throughout the 1960s. A lot of the advances they enjoyed had come in during the 1950s, so the authors went and found people from that era as well. Where possible, they cross-referenced multiple explanations and anecdotes in an attempt to find the accuracy they were seeking. Stories didn’t always jibe, people remembered things wrong. The authors went down to the level of comparing photograph after photograph to determine what speakers were in which configurations, which got used for what songs, and where custom hardware or one-off configurations played into the mix.

One of the best points during the talk for me was where they played mixed-speed versions of songs we’d all known – they show how parts that were “impossible” were often an instrument recorded at half-speed and an octave lower, allowing a Beatle to play difficult or strange parts and then speed things up to fit just fine. There were no rules or expected behavior from album to album, so the historians had to constantly check themselves. They also mention how the equipment was sold and they would sometimes track down the buyers to see the original equipment in a buyer’s shed or attic and compare their notes with the equipment.

I can’t just tell you to buy this book, although if you consider yourself a historian this book functions as an amazing example of how much work can be done on a subject just to get it right, even something as “light” and “pop culture” as the Beatles. What the authors provide, as a side-benefit to this ostensibly faddish musical event, is a contextual overview of all aspects of the production of these albums, which anyone can learn from and which endeavors to be the final word on the subject. The authors, however, never pretend to be the final word on the subject, because they make it clear that nothing is perfect and there’s always room for more information to arrive.

Truly, an inspiring book. It also costs $100. You can buy it at their website and I assure you that if you are seeking a book that functions not just as an amazing history but as a template for how to approach a historical project, this is a no-brainer to buy.

My home is improved for having this book in it. I like to think my work is too.