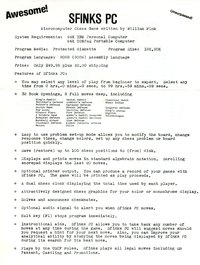 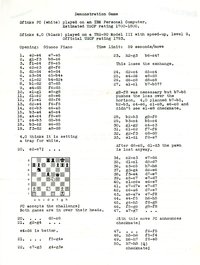 One of the side effects of the massive cleaning and sorting effort in my office is that tons of to-dos are now flying up to the surface, able to be addressed as time permits. I still don’t have a lot of time but now instead of glancing over a sea of scary paper and boxes, I’m splitting apart small piles and finding a lot that can be handled in minutes and then filed away in a more permanent (and traceable) fashion.

Hence the scanner is now back and in a part of the office where I can set stuff off to scanning and pull from piles of older computer material that I know very few other people have. Among this, for an example, is the above single-page flyer, which is for a chess program called SFINKS. I chose it for several reasons, not the least of which is the addition of the words “AWESOME!” and “UNSURPASSED!” in the corners of the flyer. That is one kick-ass chess program!

Anyway, this flyer, along with a lot of other stuff, is on my sub-site called digitize.textfiles.com, a scanned-historic-images site I put up in respond to Benj “Watermark” Edwards and a series of marked-up scans he was putting up of older material. I think we sort of reached something like a truce a while ago and he’s certainly been pretty productive, even moving out into the realm of nostalgia-baked column writer. And about once a week, he puts up a new ad or scan or the like, using a watermark/declaration system I find quite comfortable and compatible with the future. Meanwhile, I have not kept that up with Digitize.

Part of that, of course, is that I’m making a movie. But another part is that I’m starting to run into a nomenclature/directory issue. The catalog of scanned items is already starting to grow out of control at a mere 143 exhibits. What will it be when I add the thousands of items I still have around? Answer: utterly untenable unless I do something.

This is the problem with adding new amazing crap. You add too much, and people can’t find it as easy or they glaze over. Google added millions of images from the Life archive. MILLIONS. That’s more than any reasonable person could hope to ever search for the rest of their lives. (And still miss shots like this amazing arcade in Times Square.)

Since I end up doing a lot of scanning and adding of items myself, I’ve been kind of adding my own idea of “interesting” where “interesting” is either a funny, insightful, weird, bizarre, rare, or charming scan. This is hugely subjective. I then try to give as much info as I can, and then go to the next piece.

This does not scale.

This is a “problem”, one that I will address. But as a result the additions to digitize will be rather slow for a while, especially while the movie is going on. Then we’ll start seeing something or other happen, not sure what. Until then, go read up on how great this chess program is (according to the ad for the chess program).