Travel this holiday sent me between Massachusetts and New York State.

In doing so, as is often the case, I end up at a diner somewhere along Interstate 84. I like diners and while they’ve done their part to cause a lot of the weight hardship of my various years (I love tuna melts), the environment and interesting consistencies of the diner world comfort me. So I enjoyed my usual meal of tuna melt and fries and grabbed a newspaper lying around.

The newspaper was small-town; aimed for the surrounding area with a very, very heavy reliance on the Associated Press newswires. Generally, there’s little in the realm of world or even state/country politics/events that a newspaper like this could possibly garner on its own, so it needs the same newswires everyone else does. Let’s set that situation aside.

The articles regarding local events centered around the common situations of deaths, births, marriages, city councils, art and charity, and reviews of upcoming or existing entertainment. I read this sort of stuff and I feel constricted, like suddenly being faced with a boring and toy-lacking childhood room or walking the now-much-smaller hallways of a long-since-graduated school. It is cute but I suffocate quickly.

I mostly bring up this experience because for the first time in what I guess is a long while, I happened to see the comics page of an actual newspaper. Here’s a scan of it: 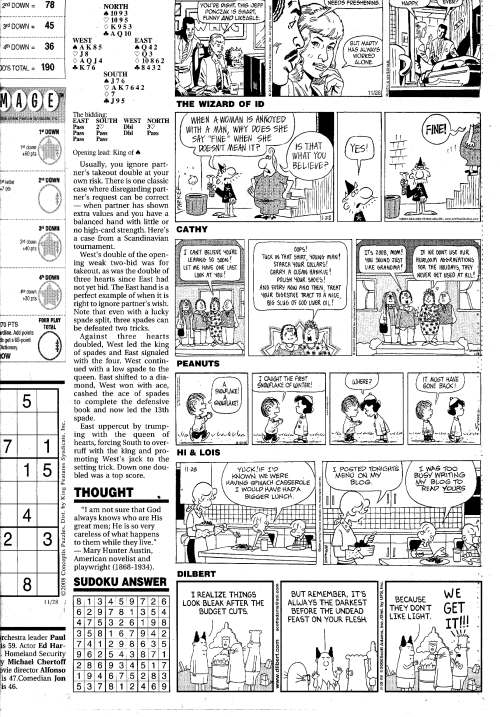 What struck me immediately, which may or may not be obvious to some who have been reading the papers in the present day for some time, is how small they’ve shrunk the comics. In the case of this paper, they’ve reduced the comics to one-half the size of the paper, shoving the rest of the “entertaining” columns (horoscope, bridge, puzzles) into the remaining half.

Not only that, but the comics are distorted; if you see the images most ingrained in the average person’s mind of Peanuts or Cathy or Dilbert, you can absolutely see how they’re scrunched up, almost accordion style, to fit this lack of space.

The discussion of this situation is very tired and has gone on for some time; Bill Watterson of Calvin and Hobbes fame was most famous for this, demanding as part of his contract that the size of his comics couldn’t be reduced. He walked away from the business in 1995 and hasn’t looked back, as far as I know. He was quite right; this is a pretty sad situation. What other less-obvious shortcuts is the average newspaper making?

In other news, this page includes an excellent lame joke involving the word “blog”:

I defer to the master in observing strangeness in this strip, but I do note that somehow this commentary is meant to be funny, and I must confess a strain between wanting the comic strips shown more respect, and strips like this that deserve none.