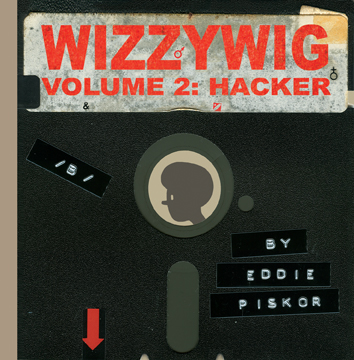 The second in a planned four volume comic series called Wizzywig has arrived. I reviewed the first volume in the series back in January, and I gave it good marks. I see no reason, looking back, to change my opinion.

The positives of the first volume remain in the second one. This is a fun little book with short vignettes in the life of a hacker named Kevin Phenicle, alias “Boingthump”, which skips back and forth through various times in the kid’s life with great zest and almost random stopping points. Random access, if you will. The stories are not meant to be little comic-strip jokes, and while I shy away from the term “graphic novel” until I see all four volumes completed, there’s definitely a story emerging from the strips, pieces left in the first book falling into place in the second. Who can complain about that?

As I mentioned before, this book uses history as ingredients in a stew; it is without a doubt historical fiction, although the events it pulls together are often from reality; I recognize fleeting glimpses of names, places, actions and materials that I know from my own bits of historical research. To point at something and go “that guy didn’t do that” or “the original event cost $50 instead of hundreds of dollars” is missing the point to the extreme. When you piece together these stories, they really do give a sense of living in the dawn of the home computer age up through the big commercialization of home computers and the wave of hype that infected the world in the 1990s, both about computers and about hackers.

Piskor is basically functioning in a vacuum here; I can’t think of anyone drawing on this period like this, combining events that happened to teenagers like myself or other contemporaries and then making them into almost Grimm Brothers fairy tales about life. I can’t speak for someone who didn’t live through the events being referenced, but I get a sense that if you had an interest in that time period, this collection of stories is invaluable for giving a sense of the exploration, personalities, emotional peaks and crushing lows of the whole endeavor of hacking, phreaking and other “underground” activity.

Go ahead and read the first half of the book online. Ed is astoundingly generous with his craft, sharing it along the way and letting people check stuff out. You’ll see what I’m getting at; these are just fun little works.

This one has a lot more in the way of bulletin board system history, so it is naturally close to my heart. Seriously, if you think a comic that has ruminations on the experience of using a BBS will ever get a bad mark from me, you’re deluded: 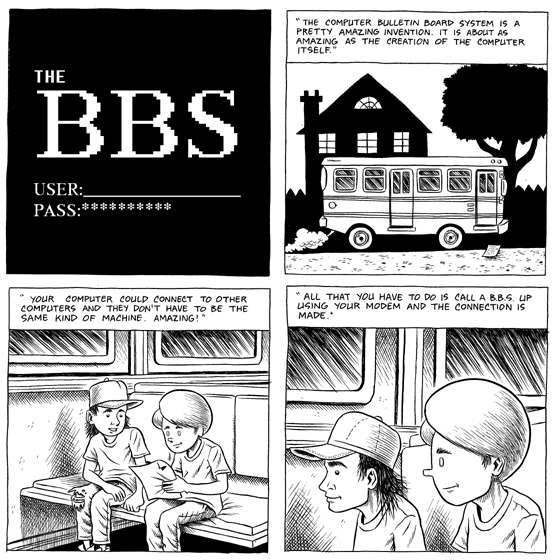 What I’m saying is, if you got the first one, get the second one. And then, like me, wait eagerly for the third and fourth.