Let me tell you of a magic thing.

It’s called the letus, and let me explain how it works.

It’s this honked up little converter that attaches to the front of a video camera, preferably one running high definition, and allows you to click on 35 millimeter film lenses onto it. Sound simple enough. It’s also pretty odd looking: 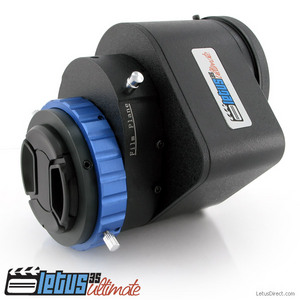 And speaking of odd looking, if you think it looks like something you use to catch fish with when it’s sitting all by itself, you should see it when it’s attached to something like an actual camera, especially something relatively small like my beloved HV20: 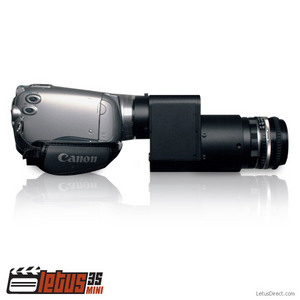 THEN this thing looks like some sort of device to inseminate cows.

But here’s the deal: it makes stuff look absolutely awesome. Stunning, fantastic. Check out this thing, shot with a hi-def camera with a Letus on the end:

Now, for the bummer: the adapter is $4000. But $4000 is maybe $100 a day rental, or around there, and if you ask me, the little addition of this guy would make all the difference. Granted, this better be for the right shots because otherwise your k-razy komedy is going to look like it was shot on the eve of apocalypse or in the vineyards of France, but that’s what cinematography is, bub. Choose the right tool for the job. And this is a hell of a tool.

There’s this place called the Letus Lounge on Vimeo. I want to live in the Letus Lounge. I want to be the guy in the corner of the lounge sleeping on a scrounged pillow and using my jacket as a blanket. I want to be in that lounge when the next amazing-looking thing comes by, so I can be the first one there, smelling like burnt cookies and with my hair every which way. Try looking at a few, for example this one with stray cats or this dangerously close to mediocre music video.

But if you’re here because you like me for my archiving and history, then let me encourage you to check out one video shot using this adapter: a story about a man with what may be the largest private collection of records. Most people who do collecting don’t agree with a ton of what he says, and what he believes, and how he’s gone about things…. but I don’t think anybody can argue these aren’t some amazing sad shots of a pile of records.

I give you… the Archive.

The Archive from Sean Dunne on Vimeo.

And because I’ve often let my opinion known on points of view via editing in documentaries, I feel like this guy is given a fair shake. He makes his statement, he shows what he thinks and what he wants, and he tells you why he loves these records so much. I don’t feel he was slighted, and people can take issue with what he says, but that’s the way it should be. So there.