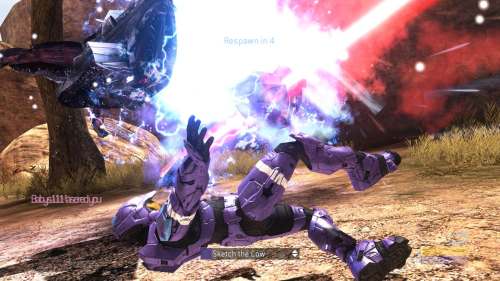 Since the time I talked about it, I have ascended in level from Captain to Major in Halo 3. This didn’t happen immediately after the weblog entry, but a few weeks later. It came as the result of a particularly involved process of just jamming over and over into games until I won.

In one fell swoop, I stopped being a Staff Captain and became a Major Grade 3.

It was such a minor change from any point of view, such a meaningless difference. But the difference in treatment was galactic. Games were devoid of bruising, useless insults from people ranging in age from tot to toker. My pre-game “chat” sessions weren’t run-downs of my statistics and demands to stop playing this game. Members of my own team would stop explaining to me, in prelude to the actual game, how much I, as a person, sucked. Like leaving an abusive relationship behind, the relative tranquility of life with a “normal” rank was palpable. My urge to choke the living fuck out of nearly every person I was “playing” with subsided like a polluted tide. The game was a game again. Occasionally, in fact, children would bless my name, discovering that a major was among their ranks and perhaps this time their usual losses would be contained. It was a good time.

And let me be clear; I don’t mean the insults went away, just that they greatly diminished. Very occasionally, maybe once every fifty or sixty games, I would have someone glance at my numerical statistics, and in a prototype for their later years as an obese bookie, proceed to ramble down in what exact ways I sucked. But this sort of person was more like the unexpected screaming panhandler, who has decided to just go for the gusto in the hope that a passerby will give them a twenty dollar bill instead of the usual quarter. You chalk it up to the variety of living and move on. So I considered this quite acceptable.

Of course, this blissful period didn’t last long. My collection of experience points in the game, combined with this rank, meant that it would be only a matter of time before I was given another rank that had gold bars.

And that rank is Field Major.

Obviously, the thing is recognizable as quickly as the Staff Captain was: it’s the gold bars. People see it and know immediately you’re of a class, a class they shouldn’t care about or can openly disdain.

Immediately, I received the same cutting remarks, profanity, and insults that came with the Staff Captain ranking. This was not based on my playing ability, merely on the appearance of this rank. I would ballpark guess that the abuse is ever so slightly diminished, since less people have rankings at this level than below, but since the game tends to throw people of similar rank together, my “team” and the opposite team pretty much know what’s up and start laying in.

Am I whining? Perhaps. What I really am is aghast. Aghast that this situation exists, aghast at the nature of the attacks, aghast that I find myself disgusted with playing the game many nights as team after team ends up telling me how worthless a person I am for having the rank I do, peppered with ironic statements like “get a life” and “go find something better to do”.

As a side note, there’s some interesting reactions when I mention I’m 38. A sizable portion of the players will tell me I’m too old to be playing, in various levels of coherency. They’re shocked I own a house, have a job, and play this game. I am told that I should be doing other things, lest I be a “loser”. This visualization of computer/console games as child-like, play for the youngest in society, is particularly interesting considering how much of the game I spend staring through the crosshairs of a sniper rifle, trying to turn someone’s skull into a wall mural.

The return of the insults and verbal attacks has brought it all back, this socially-retarded vibe that I have had to deal with in this realm since the first time I brought this XBOX into my home. Games as simple as Uno that have a chat aspect result in a panoramic display of asshatery, an in-my-face demonstration, from a consistently rotating cast of characters, just what the true meaning of the words stupid kids arises from.

Tycho and Gabe paint this world in their conventions and website, this idea that gamers are a community or a club or at the very least a sort of person who has certain elements, and when you bring them together, the best of their elements shine through. Maybe in the course of a physically-based assemblage we see less of this side of things, less of this mercenary and self-centered behavior, but I honestly start to think it’s the exception and not the rule.

This situation reminds me of how much I hated people when I was younger, hated their delight at attacking the different, of reactionary burblings from morons unfamiliar with a need to shave. A hatred of proto-adults delighting in how little they know, how poorly they can speak, how inadequate their single handful of vocabulary is. I spend a lot of my time doing what might be called generous work for many folks online, but experiences like this make me consider how few of my audience I might actually like in extended conversation, how little they would have to offer me as associates, how better off I am that I haven’t met them. Given the choice, I would make no effort to hold the elevator door open for them, or stop the subway car from closing up and moving on, leaving them in the rain.

Sartre was right. And I am positive he’d have laughed into his headset all the while.