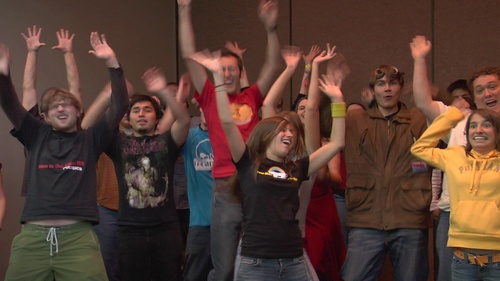 So during my time at PAX this past weekend, I was able to shoot a Frontalot video for the next album. There are plans for me to do four of them, although you know how plans are. I finished editing the first version of this video this week, with color and lighting tweaks awaiting me in the month to come. It’s up to Frontalot how, when, and if this video ever gets released. I calculated it out and the total cost of filming was exactly $0, which is a new record (the previous video cost $80). So we’re not exactly talking loss leader here.

So this thing came very quickly together, which means it might mistakenly be thought of as throwaway, when it really isn’t. Let me step through the process very quickly.

Frontalot’s new album, Final Boss, is really wonderful. The 14 tracks range from straight out dance numbers to works not out of place on top 40 radio to the sort of complicated lyrical weavings that take six listens to begin to “get”. I listen to far too much “nerdcore” where you not only “get” the song immediately, you “get” it halfway through the second verse. Not so with Frontalot. Therefore, his songs represent real challenges and meaty foundations for making these music videos, which are, after all, short films.

Like I said, four really reach out to me, one of which was a dance song called “Wallflowers”, which is, depending on your point of view, about the sad act of dancing alone or a celebration of just fuckin’ going for it just for the sake of dancing. I prefer the more positive interpretation.

The song is relatively simple, at least in terms of length and structure. A week before PAX, I got this idea to film a video for it at PAX, which brought into play a bunch of puzzles and considerations, all of which I’d have to handle pretty quickly. I called Frontalot and threw it past him, and he was fine with it. I therefore knew I was in for some quick packing, as I was at Peter Hirschberg’s Game Day and I’d be flying back into Boston for 4 hours before flying off to San Jose for another trip, then up to PAX in Seattle (It’s been a rough month). So I had to go to my home and yank together every possible piece of equipment of use for shooting a video that I hadn’t fully designed yet.

At home, I got the camera, storage device, and a tripod. There was just no room for lights. OK, so I knew I’d have to use available light, wherever THAT was. I knew I’d want to shoot attendees of PAX. I knew I’d prefer them to be Frontalot fans. I knew that it would not use any environmental sound, since PAX would be a nightmare of milling people. It’s not usual for a music video to use environmental or added sound anyway (with some exceptions), so this wasn’t a hard choice.

I had no idea where in PAX I could shoot, but I was really preferential to a neutral background. I wanted the interactions of people in it to be isolated, so the viewer would concentrate on them and not the dozens or hundreds of others in the background. I knew basically one thing: I wanted them to dance.

I eschewed shooting on the first day. What do I know of how PAX was set up? And also, I wanted to enjoy the day. So I attended PAX as any other schmuck, and kept an eye out for potential places to shoot. I wanted a hallway that was empty, preferably, but none really struck me. I also wanted the brightest possible direct sunlight, because of my lack of lights. The atrium where the bands signed things really leaped out to me, but that was a high traffic area. The standard halls had some flat space and I did some test shots, but they were rather muddy, and far away from Frontalot’s signing location. I figured people who would want to be in this would not walk far away from Frontalot unless I was doing something so crazy interesting that they’d hear about it from others.

I considered shooting from behind Frontalot’s table at PAX. This was a bad idea on several levels. First of all, we’d get the same problem I mentioned before, with way too many people in the background being distracted and filmed against their wishes. It would also interrupt Frontalot’s selling of albums and materials, and since this is his full-time job now, a needless economic risk. So that was dropped quickly. I decided to wait a little later in the day.

What I discovered was that at 6pm, the main exhibit hall closed, and the atrium emptied out massively. Where before I couldn’t imagine shooting, it would apparently become a great place to shoot. But it would get dark at 8:30pm. (I had watched it happen on Thursday.) So I figured I had at most an hour to shoot in this location. An hour to shoot a three minute music video is a very short time. But I decided that was my only choice.

On Saturday (my shooting day!) I gave Frontalot a sign saying a video was being shot at 7pm. He had it at his table and would mention it to big fans. Additionally, there was a showing at 4pm of the story of his first countrywide tour, Nerdcore Rising, and I asked the director, Negin Farsad, to mention it at the end. And she did, which went out into an audience of a thousand. So chances were, we’d be in good shape for shooting.

40 people showed up, ultimately. Maybe that doesn’t seem like a lot or maybe it seems like a lot. In fact, it was an excellent number for what we wanted to do.

At 6:30pm I began by cleaning up one of the corners of the atrium, which had a bunch of paper bits. This corner was where the entrance to the main exhibit hall was. It had closed just minutes before. After I was content with the relative cleanliness, I started doing test shots with one of the cast, who was a film student and wanted to help production-wise. Unfortunately, things were going way too fast for me to really use him for anything, but he was an excellent standing-still light subject. As I suspected, I needed to leave the settings of the camera totally open to grab the daylight.

I assembled the cast, yelled out some crazy introduction to how this was all going to go, and then led them onto the “set”. I had them do a number of dance moves and poses while my assistant stopped and started the song on my laptop.

After that, I went through 26 people, some of them paired up, others alone, and had them dance to parts of the song. Every time I set them up to shoot them, I’d give them Frontalot-style glasses to wear. I chose people often based on who seemed most likely to up and leave out of boredom. I paired together two women, two men, a couple friends. Some people were great dancers, others were not as good. All had heart. And as Frontalot fans, they were getting the chance to express themselves with their artist’s work, which was the point.

This might sound slapdash. On one level it was, with a total shooting time of 50 minutes, which has then been assembled into a 3 minute video. But on another it was anything but. The core idea behind this video was I wanted fans of Frontalot dancing to his music and being themselves. And that I got in buckets! Some of the people are so hilarious you’d think I’d hired them and run their audition tape through along with a hundred others and chosen them. The song is about being open and free and doing your own thing without fear, and I put a couple dozen people through that very trial, and they came out of it swimmingly. Perhaps this wasn’t the crafted collage that my Pitch Dark video is (or what the others will be), but it stands very nicely along the lines of its two intellectual parents, Everybody Have Fun Tonight and Short Skirt Long Jacket.

The video was edited into version one over the course of two days and has been looked at by a couple people I trust. It’s generally liked, and understood to be a fun little thing. I’ve played it a few dozen times and enjoyed the thing the more I’ve gotten away from the process of cutting from all the shots. Maybe when it comes out I’ll talk about my editing choices in more detail, but I think on the whole, this lark of a shoot resulted in a great little project. I hope people enjoy it when it comes out.