This is about playing video games and watching a movie. On its face, not a particularly unusual-sounding day, but this was my favorite collection of videogames and I’d been waiting for over a year to see this movie.

The event is, as I’ve ranted about in the past, the semi-annual Game Day hosted at Luna City, Peter Hirschberg’s self-made private arcade located in Virginia. This work of art, this living museum, has been functional since the beginning of 2008 and barring disease or other unforseen circumstances, I will attend as many of these that he chooses to hold, forever. Less a private playpen than a sort of shine, a regular pilgrimage to this location clears the soul. The arcade, like many such places, is a pure source of amusement, a collective of machines meant to vex, delight and entertain.

I am not the only one to come to these, of course, and the parking on the front lawn has become more and more full over time. Along this line, the event had an air castle (bounce room or sock hop or inflatable castle to others), which was the perfect place for scads of screaming children. On the other side of the barn, snacks and soda were available for a small fee, benches let you enjoy the sun, and there was even a small contingent of games out on the lawn to play, including an Atari 2600 and television braving the outdoors.

As is the norm in Peter’s character, this particular game day had an additional theme, that of helping to raise money for a friend of the family named Shawn Haines, who has Hodgkin’s Disease and whose insurance is unable to cover his expenses related to medical treatment. There were opportunities to both learn more about Shawn and to donate towards helping him with the sizeable costs. The page I linked to has further opportunities, should the incentive grab you. It was very kind of Peter to add this aspect to the event.

I have yet to grow even the slightest bit fatigued taking photos in Luna City. Like a classic artwork or a famous landmark, you find new angles to try, new shots to construct, and a sense of a timeless place waiting for you to capture it. I was there from about noon through to the evening. Were that I could stay longer!

Just a few more. Come on. As time has gone on through 2008, all manner of magazines, newspapers and websites have come to admire and obsess about the Hirschbergs’ project, and all that attention is very well deserved. May it last a very long time.

And yes, down here towards the bottom of the article, let me mention the highlight of the day: being able to finally sit down and watch, completely, the final cut of Chasing Ghosts.

Here’s a photo of the producer and Peter just before one of the multiple showings they had upstairs during the day.

OK, so here’s the thing. I’m known as the guy who hates King of Kong. In a series of articles I wrote on this very weblog, I got to lay out my position and what I found out was wrong with it. I paid a tiny little price for that, and so I was glad to be rid of the whole thing. (Not as much as poor zota has, between his semi-enthusiastic timeline and his passive-aggressive conspiracy theories.)

But get out your collander helmet on this one: this film features sequences done by Peter Hirschberg, and is an arcade documentary I happen to like very, very much. Now, do you decide I like the film because Peter Hirschberg helped make it, while somehow also deciding that I didn’t like King of Kong because I’m working on an arcade documentary? Or do you buck up and let me tell you how great this thing is?

Let us move on.

The core story of Chasing Ghosts is this image: 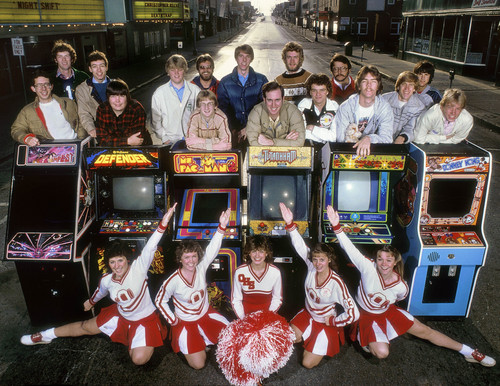 This photo from Life magazine was taken on November 8, 1982 in Iowa, at the site of the Twin Galaxies arcade, the self-styled Videogame Capital of the World. It portrays a once-in-a-lifetime grouping of the champion videogame players of the time (along with, as we find out, one faker). That videogames would have this sort of cachet, that the high scorers would have such celebrity, that all this conjunction of technology, celebrity and oddity would take place in a tiny town called Ottumwa.. this is what we learn in this film.

In tracing the lives of these men, we find pathos, triumph, wonder, loss, and all manner of humor. We see the growth, peak, and disassembly of the Classic Videogame Era, and find out what has happened to most of the people involved. Some have long ago left it all to memories of a bygone era, and some snap into the issues and stories as if they’re still living them.

The portrait of Walter Day, the referee and founder of Twin Galaxies (and, we find out, all sorts of other strange endeavors), is heartfelt, teasing, and ultimately well-rounded. I’ve interacted with Walter a number of times. This documentary gave a portrait of him that was so much more than I knew about him, and give me a greater respect for how he’s lived such a strange and fun life.

Is Billy Mitchell in here? Oh yes. Is Billy Mitchell a mullet-wearin’, trash-talkin’ son of a bitch with the arcade skills and the iron nuts? Hells yeah. I never said, anywhere, he wasn’t any of this. What I took issue was the (inaccurate) portrayal of him as a liar and a cheat. He gets in just as many zingers here as he does both in King of Kong and in articles written about him. What we also get, like we do all the other interviewees, is a sense of this person both in his youth, in his modern guise, and how his life is with family and friends. People get a fair shake in this movie, is what I’m saying.

I could step through the events in this movie (they range from the 1970s to just a few years ago), but let me instead direct your attention to the film’s primary achievement: the media sources.

This film is packed, absolutely loaded, with photographs (hundreds of them), video (ranging back 20+ years), and recordings related to videogames. All throughout this character study are amazing sequences featuring the interviewees talking about something that happened 20 years ago and us seeing the footage of that event happening. The talking heads, in other words, consistently give way to us being there, seeing the news camera footage, hearing the people talking in their original teenage voices, the bright and dazzled eyes, the declarative voices of youth who knew that they were the best in the world at something. It’s a torrent of history that this movie brings to its audience, without being overwhelming.

The lives of the players in the present day are of all types, some happy with family and others living in a clung-to-edge existence that some would find pity for. Regardless, it’s their lives; people aren’t “caught out” or duped into juxtaposed implications of criminality; they’re just a range of guys who on one very cold morning assembled with some videogames to pose for a photo shoot 25 years earlier.

The movie is wonderful.

And currently, you can’t see it.

They ran it on DVD that day, on Game Day, a half-dozen times, and the producer was there to answer questions (as well as one of the interviewees). The movie is still out there in limbo, with some hopeful release on the horizon. I think it would be snapped up in a moment by thousands of people who remember the lure of the arcade, the wonder of that time. And it would be a great introduction to how different life was back then, when these games invaded our space. I can’t wait to see it out there, wowing you all.

Until then, trust me: it’ll be worth the wait.