So I went to Comic-Con and I had a really wonderful time. I met a lot of my personal heroes, from back when I drew cartoons and fancied this as a future career, before I stopped doing so. They stayed my personal heroes of course; so getting to meet Al Jaffee, Frank Cho, Rick Geary, Terry Moore, Sergio Aragones, and a large realm of others was really, really great.

I feel redundant in the extreme talking about this event, since it was attended by many tens of thousands of folks and I’m sure many of them have something to say. This whole weblog endeavor is ostensibly about computer history and there wasn’t a whole lot of that going on. (A trailer for a TRON Sequel called TR2N got some attention, but since the movie isn’t slated to appear until 2011, we have some time to discuss that one.)

Instead, let me mention two unrelated points that are at least tangentially related to what I deal in.

The Comic-Con panels that have any amount of attendance are absolutely packed, often requiring an hour or longer wait to be able to attend them. (One event, a Saturday masquerade, had people in line eight hours ahead of time.) As a result, I spent a lot of time on the sales floor, which is like every other sales floor in any slightly-large conference: hundreds of booths, ranging in size from tiny tables with an eager artist/salesperson behind them to multi-hundred-square-foot behemoths that contain second floors and banners the size of Cadillacs.

The event is called Comic-Con and this implies that the central theme will be comics but it’s quite obvious from an objective first-time observer that this core competency was thrown out long ago in favor of expansion. While someone somewhere thinks they’re holding fast and firm to the principles this decades-old event was founded for, they’ve long since passed into the idea that the event is really about “Popular Culture”. What this means is that Comics are jostled about in favor of movies, TV shows, pop stars, and video games.

Certainly there were a number of booths that, perhaps with some mental effort, could be seen as related to the core subject; booths with figurines based on comic figures or containing clothing that in some rare cases have comic book characters on them. With so many comic books made into movies, the movie booths with both comic book translations and “other upcoming movies” are understandable, if relentlessly loud and filled with silly announcers. But then there’s the booth which contained nothing but what was essentially a large bunch of banners for the ABC Family Lineup, which is a branded cable channel from the ABC television network. And there was a solid collection of video game booths showing, essentially, video games and nothing else. Both of these (and many others, I hasten to point out) are there not because they’re in theme, but because they were willing to pay large booth fees. And they were willing to pay these fees because they were merely seeking bodies to rush by their gargantuan, blaring advertisements for their product. This is, to me, a sign of an organization that has somewhat lost its way. Segregating artist booths and comic-book vendors from the videogames and the movie booths was a good move, but I mull how long before we see the two booths that really enunciate the cancer within: timeshare traders and vitamin drinks. Once a booth with either of these shows up, you’re just a big general blob of vending. The banners around San Diego’s Conference Center for Comic-Con called it a celebration of “Popular Culture” and the advertising elsewhere indicates this is the trend they’re going for. And hey, if you want to be a living group-hug version of People Magazine, you go have a great time; but I had the pleasure of attending the MOCCA Festival and found a lot more honesty in those rooms than I did in San Diego.

I suspect that people debate this an awful lot at and around the event; I’m saying the battle is basically lost. Enjoy your timeshares.

Second point: The Joker in the line

When your event is attended by over 120,000 people (this is an actual, real number), you can expect that an awful lot of ideas that would be unique and cool in a smaller arena are guaranteed to be neither unique nor, sadly, cool. It’s one thing to be in a crazy outfit or holding up a funny sign and it’s an entire other situation to be absolutely surrounded with milling herds of people in crazy outfits or funny signs.

Additionally, it’s hard to really think of a tenth of a million people as being any sort of community or cohesive whole; while I’m sure there are whorls and knots of people within this glob that consider themselves a group, it’s possible to go for the entire 4-day event and never meet a vast percentage of attendees. I am sure people who read my work or know of me might be surprised to find out I attended, and yet there was no chance in a thousand that the two of us would have randomly bumped into each other.

I mention this because when people review or discuss folks being weird in the context of this event, you might as well say you saw something weird or stupid in the context of a town, since 120,000 people is basically a small city, population-wise. You’re just not being fair.

So allow me to be not fair.

Saturday night found me in the masquerade line, this thousand-person conga that led to an event that I myself wasn’t intending to attend. Friends had tickets and talking to them in this line was as efficient as anything else, so there we were, slowly milling through the convention center grounds towards this massive room. I endeavor again to point out that this line was over a quarter-mile long.

Behind us were a couple people in costume, which I had not paid much attention to until a camera crew went by, and then I realized one of the people behind us was in a Joker costume. Due to the success of both the Dark Knight film that had recently shot to number one on the movie charts and the general totally-rules-ness of Batman, Comic-Con was swarming with Jokers, not unlike how a pile of sugar outside might swarm with ants. The place was lousy with them. The Joker behind us mugged for the camera, wearing some sort of straitjacket getup, and generally, I thought, having a good time.

Naturally, 2K of people in a non-moving line is an irresistible target to not just camera crews but others looking to play with minds, and a person in a Yu-Gi-Oh costume was walking by holding an empty sign. Totally empty, I promise you. This was, in my understanding, a parody of another “funny but everyone’s doing it” situation, that of FREE HUGS signs being toted about.

Something about this set Joker off behind us, and in his behavior I saw all the ugliness that is sometimes bandied about in the surface discussions of fandom and fan-based activities.

Deciding this was a standard-issue FREE-HUGS sign-toter, he began loudly and vocally insulting them, calling this specific person lame for doing so. When the sign-toter pointed out on their way by that the sign was blank, Joker launched into an actual, bone-fide top-of-lungs rant about the quality of the sign-holder’s costume (A reference to their “four-dollar bandana you got from Mom”) and then a general screaming fit about how, and I do quote, “everything exported from Japan is crap”.

Oh, it was ugly, ugly like I wanted to be anywhere but near this guy.

As an aside, his dedication to his costuming was at best scant; he had a goatee which he had dyed green but apparently refused to admit the Joker didn’t have a beard. He was rotund, and had large glasses, neither of which crosses my mind as Joker-like attributes unless there was a “Joker: The Later Years” series I missed. And his hair was merely green, not particularly made up in any fashion. His acquisition of a straitjacket was, based on its light material, of the very same at-arms-reach approach of anyone willing to shop online; it was hardly an impressive get-up. To be honest, he’d have made an awesome Harry Knowles, attitude included.

I oscillated wildly about responding or jumping into this fight, and I promise you, I’m not an Internet Tough Guy; folks can attest that I am just as cruel or linguistically vicious in person as I am within the world of text. What I was responding to, emotionally, was that this rotund joker-esque loser was being a Bully, the same kind of Bully that might plague many an intense lover of drawn arts through their early years. That this stunted creature would represent anyone else as being of inferior quality simply because of his own hypocritical hatred of nerds not totally in line with his flawed outlook, well… it just burned me up.

But blank-sign-holder was already down and out of sight and FattyJoker was already his usual mute self, and I had friends to talk to.

Why do I mention this story? Well, mostly to say that even when you think you are among people like yourself, when you would think there would be little in the way of pointing out flaws, causing unnecessary conflict, or pointing of fingers in directions fingers need not go, it happens anyway. It’s a terminal situation, I guess; add enough people to something and the individual personalities will eventually blow out enough noise to lose the signal of why they were all there in the first place. It took a Joker in the line for me to see it clearly, but it took another few days to realize: it doesn’t matter. I had a great time. I met heroes. I bet the Joker had a great time. I bet blank sign person had a great time. And that’s what it was about.

Update: I am stunned; someone found my Joker: 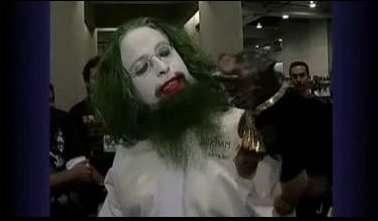