A lot of interesting subjects or exploratory pathways reveal themselves in my projects or research, but not all can be handled at the time. Most certainly can’t be explored to a great depth when they’re more about contemporary social commentary; life certainly has enough of that piling up.

But during one interview back half a decade ago, an early employee of The Well used an interesting turn of phrase about people working at their computers. The exact phrase, in the process of talking about what might drive people to be aggressive online in ways they’d never be in person, was “This is their Power Spot.”

The idea of a “Power Spot” was actually what I was sort of going for in my documentary interviews for the last film, where I wanted to show people in these wonderfully constructed worlds they’d set up for themselves around their computers. I had one of my own, and so did many of my friends. I think the best one that comes to mind for me was Ed Williams during his interview: 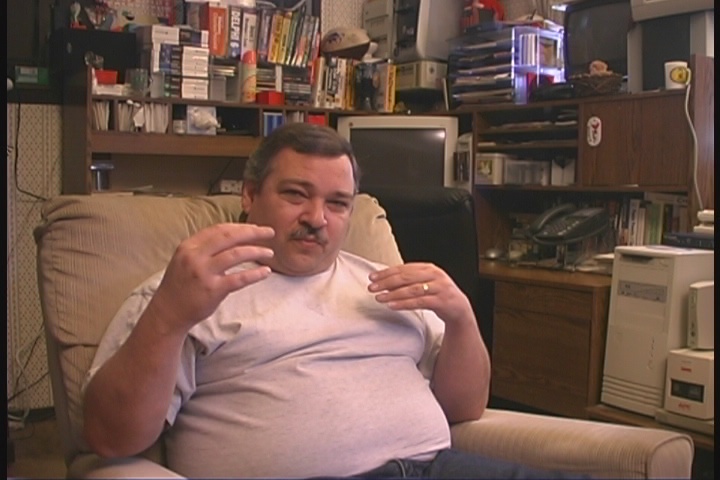 Ed was an absolutely wonderful interview, and he appears multiple times as a speaker of wisdom on issues of social behavior on BBSes and Fidonet and elsewhere. But for a moment, check out that kickass setup. It was in his living room, and he’s in front of a beautiful construction of documentation, technology, and easy access. It’s a throne, a center of communications he can interact with the world and keep track of stuff, and yet one quick 180 degree turn and he’s back in his regular home life, with his daughters and wife. If you sneak a glance over to this photo you can also see that there’s an opening to the left and above to the kitchen, enabling conversation or passing of food as needed. It was a great setup.

Stripped of the narrative, here’s additional such desks I encountered during my movie: 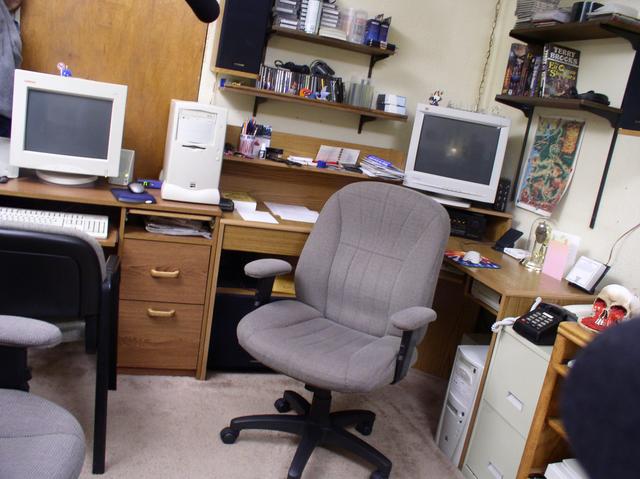 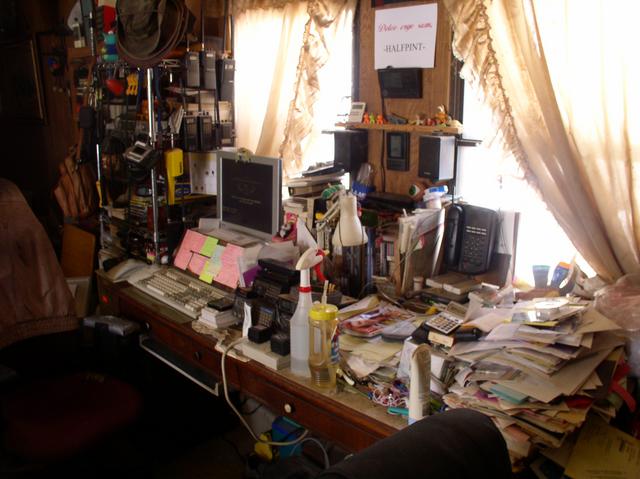 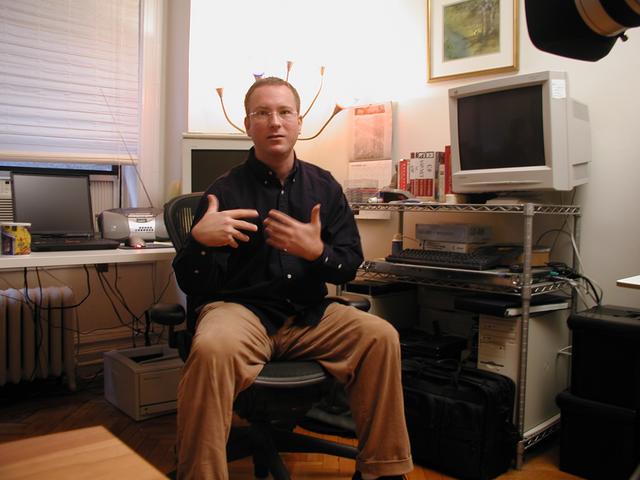 These are, like I said, places unto themselves. They breathe and live according to their owners, and are essentially sizable pipe organs from which to communicate or create towards a separate idea of “outwards”. They are the castles built to house the thinking and creating aspects of the computer user, as they face into a corner or a wall, with the potential to lock themselves away from any distractions they wish to not have.

Some of this is a necessity. The machines, even the more recent ones, all tend to be about the size of a couple of stacked toolboxes, or of a suitcase, housing disks, video cards, removable media drives, and, in some cases, a really cool glowy side window with CPU. They’re big. It’s weird to put them elsewhere, or more accurately, if given the choice, we don’t want them elsewhere.

Some people don’t have the luxury of a corner or dedicated room, of course, and then we see things like the dining room computer. Photos of these are harder to find, but here’s one and here’s another one. For my own bit, this was the setup we had at my Dad’s house, for reasons I can’t recall. I would work in the dining room, in a house that was now too big to do much in once the divorce happened. Originally, the house had this massive playroom downstairs in the basement that looked out over the lawn, but a combination of it being cold and the room being utterly cut off from the rest of the house (which I found terrifying as a child) meant it ended up becoming nothing short of a broken toy crypt, and certainly no place for the computer. So the dining room it was, and so one side of the dining room got filled with my computer crap. I still have memories of calling BBSes all night, until 5 in the morning, only to have my dad come out of his room, come into the area, and start screaming.

Looking back, his anger seems pretty misplaced: Oh my God, my teenage son has stayed up all night IN THE HOUSE and didn’t DRINK, BRING OVER FRIENDS, or GET INTO STRANGE CARS. But either way, I was having a ball and the screaming didn’t dissuade me from doing it all over again. After all, this was my power spot and I used it to collect the thousands of textfiles that became the heart of my later archive.

I assume for most people the dining room computer, or kitchen computer, was a by-product of needing to watch the kids, or not having an office room, or a billion other reasons. What it came down to, though, was once again a computer begat a pile of documents, machinery and connecting wiring into a heart, a center of the home.

For some people, this is how computers are. They’re how they relate to the living space; they’re places connected upon the world yet disconnected to themselves.

But I contend this seems to be changing.

I think this is the future of what we’re starting to see: What I’m pointing to specifically is a laptop computer, perhaps accompanying a mobile phone, resting on the coffee table of a living room, with a large TV that has connected to it one of the multi-use game consoles as well as a variety of other TV-manipulating devices, be they TiVOs, Apple TVs, homebrew items, satellite boxes, and the rest. As time goes on, I think this will be the default, with the usual spectrum in other homes, ranging from no computer in the living space (sans something like an iPhone) to the usual hell-boxes of computer insanity, say, what I’m currently writing in.

Before my own contemporaries begin howling, I realize that for some of us the inertial nature of our lives means the way we’ve set up computers since childhood will continue. I’m speaking of those who have a blank slate, who are now rising up to computer ownership and interaction. You know, people for whom touch screens are ubiquitous and a vital aspect of a photograph taken is to immediately demand to see it.

At the ROFLcon event I attended, they set up several ways for people to arrange for Friday night get-togethers. They set up a web forum, had an IRC channel, and even had some pieces of paper in one of the lobbies for folks to write what they wanted to do together. Everyone fucking ignored these. They used twitter. They jacked into the ROFLcon tag, sent massive twitters to each other, and arranged stuff their own way. I don’t twitter that much and certainly not from any mobile device, so I ended up going home to change clothes and rest up before going to a concert held later in the evening. We could talk about how arrangements are done and how people communicated, but for that group, for that generally young group of people, it was Twitter. Period. That’s how it was done.

Similarly, I think we’re seeing the laptop becoming the computer. I think desktops are becoming specific purpose machines, used for video editing or graphics or games, but even there the laptops that can handle games are growing. I think people expect their computer world, their power spot, to be a mobile item, no longer a pipe organ but a traveling troubadour, ready at a moment’s notice to strike up their favorite song wherever they may wish to be to hear it.

One of my friends wakes up in his bedroom and looks across at a beautiful desk he no longer uses, infused with papers and older equipment he hasn’t touched in two years. His power spot is in the living room, sitting with his laptop and checking the world out in between games on his XBOX 360. In between commercials during his shows. For those slow moments in the DVD he’s watching.

This theory of mine is just that, a theory. A series of anecdotes, of postulations. I don’t pretend it’s otherwise. But I think it’s interesting to watch the nature of them, to see how the computer’s relationship with us is changing and how our own lives are changing, separate from the hypesters and the marketers who will push any lifestyle that’s more expensive, into the default way we communicate with the world.

I wonder if I’ll be right.