For reasons that nobody cares about, I was sent two companion threads, one closed and the other basically so, regarding the release of an Atari 2600 cartridge. This is interesting in itself to some people, but in fact I’m more fascinated by the body of it and where things went wrong. And things did go wrong! A discussion announcing the availability of a new rendition of a 20+ year old Atari 2600 program quickly turned into a free-for-all and was closed. Then, a week and change later, a reference to this thread was made in another forum and even more vitrol occurred.

I am an objective observer, and a student of the discussion thread and its myriad implementations. Let’s consider then, what the hell happened.

My summary of the subject matter is this: Rob Fulop, an established and historical figure in Atari history, announces that he is looking for input for the price of a limited edition Atari 2600 cartridge he has made of a game he worked on in the 1980s called “Actionauts”. Here’s that message: 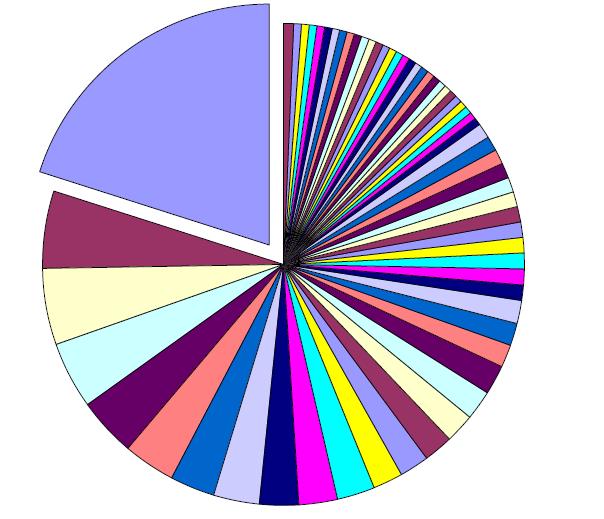 Already, there’s an obvious imbalance or unique aspect here: the conversation is Rob Fulop (that big blue slice) posting an amount equivalent to at least 30+ other participants. Taken another way, he posts messages frequently and in response to others, all the way through to the end of the 45 hour period. Being that this post is about soliciting questions, the warning sign is that Fulop does not in fact merely post a question (and related poll); he immediately and consistently engages the posters in debate and discussion.

The problem with a “what do you think about this”, or the hardest portion, is listening to what people say and then waiting until it’s all died down to give a summary thanks and move on. Fulop instead begins a conversation and ultimately a quasi-interview/roundtable masquerading as a poll.

A web-based forum (in this case, AtariAge) is no longer imbued with the limitations of bulletin board systems; multiple simultaneous posters are a breeze, images can be embedded into discussions, and the software allows for instantaneous restructuring of the postings to satisfy a linear or threaded regard. While in many ways this is a positive set of innovations, it also brings along with it potential for flamewars and flare-ups to immediately consume the parties involved. There is no waiting period. There is an abundance of meta-discussion due to the non-scarce resource of access. There is a lower barrier to entry with commercial and societal interests in lowering the barrier even further. This is the modern environment and it’s the way it is.

So saying that there were an average of 4.4 posts an hour is not all that helpful, in fact; you have no idea of the distribution of the messages. Since people can be writing multiple additions simultaneously, the forum can actually “breathe” in a manner not unlike a bellows or chamber in an engine; with posts queuing up in great numbers and blasting across the message base in waves. With this in consideration, here is a different observation of the posting metric: the number of posts per hour across the 45 hour period:

The “breathing” of the forum discussions becomes more clear with this view. We see the usual flurry of initial response and activity of a healthy thread, which then reverberates in a more quiet fashion for a while before it all flares up again, followed by the same reverberation, and then a small up-ramp at the end that is cut off by the thread closure.

Not surprisingly, that second flare-up is caused by a post by Fulop. So let’s address the content.

As mentioned above, this thread is ostensibly about the future release of an Atari 2600 cartridge and the suggested price points by the “community”. It is a question posed by the cartridge’s creator, a man of strong pedigree and historical credit named Rob Fulop. Once an Atari engineer, he is a co-founder of Imagic, a third-party maker of Atari 2600 cartridges, which ultimately shut down. He has his name in a good amount of productions throughout the years. He is, in other words, the Real Deal.

In his poll, he asks two questions: Should the author of a new 2600 release be paid for their time spent? and What is a reasonable monthly salary for a 2600 designer to earn? Since the title of the thread is “Actionauts price tag?”, we run into another problem: the poll is not related to the question. The question should have been “how much would you pay for the following item” followed by “what is important to you in buying a package like this”. These are the questions one would reasonably expect.

Within the first fifteen minutes of the thread, a user named Mirage1972 answers the poll (which is anonymous) and then writes this message:

Mirage’s response is informative, helpful, complimentary, and even does some basic research to accompany his opinion.

FOUL! Here we see the roots of the problem: Fulop takes Mirage’s statement and throws it back into his face, implying not only that Mirage has degraded his skills and dismissed his efforts, but that he considers his time equivalent to a fast food restaurant’s “assistant” manager. Note how this is all crafted; the $2k/month figure was one of the original (poorly chosen) poll questions; Mirage simply selected it. It turns out that Rob conisders some of the potential poll questions wrong. This is not how polls work; you poll people to get answers. That people might answer incorrectly with regards to objective knowledge is not the issue; with a poll, you realize there’s a problem (too many US citizens can’t find Australia on a map) and you then use this information to create a counter-campaign. (More geography lessons; make Australian tourism commercials include graphical representation of Australia’s location on a globe, etc.). If the poll-taker immediately turns around in the same public forum, and implies that he is personally insulted by the answer, then the poll is no longer relevant and certainly not objective. Additionally, he takes the answer from a single responder on a single thread on a single site and immediately indicates that “[this] is how this community truly values people like myself”. Now we have a double-edged sword: the “community” has been accused of sub-par character quality, and the poster has indicated he considers himself very important/worthy, a problematic non-humble position not sure to win favor.

Fulop quickly falls in love with the Jack in the Box slur; he uses it multiple times in his subsequent postings:

The insults don’t stop there. Fulop quickly takes his own thread downhill as fast as his fingers can conjure the words.

In these cases, landmines are being laid, landmines ensuring someone will come along and trip on them.

The second-flareup is interesting; it concerns what represents a living wage.

Specifically, Fulop takes umbrage with the “$2k/month” atari developer wage, the idea that he should only make $24k a year. In fact, it’s easy to interpret this poll question many ways; what’s a good wage to make doing atari carts in your spare time? What’s a good wage to make with atari cartridges after you’ve done all the work and am collecting new items? But it turns out the secret answer was that Fulop was asking how much poll responders thought any Atari 2600 Developer should make in toto in a given year while working full-time in that sole capacity. When he then indicates that $4k/month would barely be a living wage (this is $52k a year), then cultural issues come into play.

For some locations, $52k is a princely sum, while in others it can’t support an apartment, much less food and transportation. Within Fulop’s position (and he is a man well along in years, having been involved in this industry well beyond a quarter century), it is entirely possible that $52k can’t possibly support a healthy lifestyle and living wage; but this was not asked in the poll and is not the point given in the poll. What starts as a simple question about the price of a cartridge becomes a man’s last stand of sanity against an onslaught of cartridge collecting zombies, firing randomly into the sea of grabbing hands to protect his livelihood.

Much of the thread, then, is meta; people defending Rob Fulop’s talents (which are not in question), people discussing a living wage and what that means, people discussing where everything went so wrong in the thread, and people defending other people’s positions as various sides are taken. A parallel conversation occurs as to the definitions of “gamer” and “collector”; Fulop sees them as distinct and disparate groups, while others see more of a grey area or spectrum. This discussion muddies at the core level from that point on, until Fulop throws up his hands and requests the thread end; he’s gotten what he ‘came for’, although it is not entirely clear how he could have possibly achieved this.

Ten days later, on another web forum, a new thread begins, starting with the pricing of the cartridge and disagreement on the price. This brings the players back into the same fight again, the one that should have never happened in the first place, based on a poll question that was poorly asked and poorly discussed afterwards, and a range of insults and finger-pointing that naturally come from this discordant, foolish melee.

Forum Referee rules that Rob Fulop is a very talented man who is also a dope. Seeking assistance in pricing a product does not give you slack to insult anyone who takes the time to give their answers. Twisting around words and then throwing them back at faces, indicating insult where there is none, and giving your poll answerers a total of 30 minutes before you jump in and start swinging indicates what the kids call a “total n00b”. Unsportsmanlike Conduct!

Stay off the forums and do your good work when time and money permit.