Boy, you can’t get drier than that for a title, but I thought I’d mention all this anyway.

While working on some of my editing, I discovered a small (about 20) set of clips from my collection are in fact dead. Black screen, empty soundtrack. Still the size they would be if they had data, but they don’t. 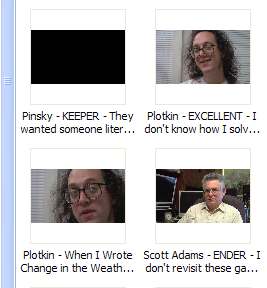 Well, nobody likes stumbling on that. Luckily, my paranoid approach to all this works out: the description of what’s in the clip is there, and I have the date, and I have the raw footage at hand, so I can re-extract these needed clips with little issue. Bear in mind I’m well over 1,000 clips so the percentage affected by this is small.

I get kidded for the use of USB, but it works out for me and it’s cheaper than a lot of alternate approaches, and I offload a lot of quantifying and recordkeeping from them so they’re simply and truly storage. I have copies of all data across them, and I utilize local internal drives. At least, I do more than I used to.

When I would render from Vegas, my editing program, it would render out to a holding bin on a USB drive. Specifically, a Seagate 750gb External Drive. These are enjoyable little suckers, with a nice tough case and real heft, and it helps when you have a massive stack of these things like I do.

Well, among the “features” on these drives is “spin-down”. In “spin-down”, the drive notices nobody has been talking to it for a while. So it goes emo and shuts down. When it’s requested by the parent OS going “you better get out there and mow the lawn”, there’s this delay while the emo drive gathers up its stuff and its iPod and goes out. This pause makes my entire OS pause. Ain’t pretty.

Anyway, Vegas was apparently doing this clever thing where it’d make a request, not get a timely response, then get one later, then render out as if there were no issues. Result: black video, silent soundtrack.

Some time ago, I switched to rendering to a proper SATA internal drive, then pushing out to a few externals every day or so. This obviated the problem. But going through editing, I found these little reminders that nothing’s too easy, nothing can be looked away from and just assumed to be perfect when you need it.

Lots of little lessons come up like this. I just thought this one would be interesting to mention.

This is very nice footage. Even if occasionally very emo.