I was sent mail informing me that Ryugen Fisher had had a heart attack and died suddenly. It had actually been a year since it had happened, in Chicago, while he was on a retreat.

Naturally, when someone dies, I don’t expect that any documentary filmmakers who interviewed them would be notified. We didn’t run in the same circles, so I wouldn’t have gotten news that way. I am grateful I was eventually sent some mail about it, of course.

Ryugen was one of my best interviews; he’s the middle guy in the Fidonet Living Room interview I conducted in St. Louis in the room where Fidonet’s biggest revision was hatched. I used footage from this interview extensively in the Fidonet Episode of the documentary. 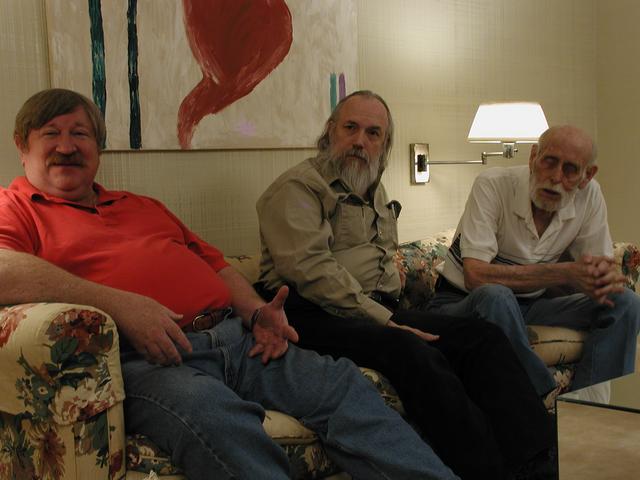 I was told he was very excited by the filming coming up and talked about it for some time afterwards. During the interview, the other two gentlemen (Ken Kaplan and Ben Baker) also talked about how much Ryugen had influence on the steadying of emotions and the halting of battles internally in Fidonet.

Ryugen called himself “That Old Frog”; he did this in a lot of documentation and in a lot of messages, so finding him within the history of Fidonet probably requires that bit of information. He was a tattooed biker, a technical junkie, a consulting programmer, and a Buddhist Sensei.

Here’s a photo of Ryugen in 2005 from a party he attended.
Here’s a touching tribute written about Ryugen from one of his friends, with an excellent photo.

Of course, I have two hours of Ryugen speaking about Fidonet, politics and ARC-ZIP. I’ve moved them up on my (very slow moving) BBS Documentary Interview Collection queue, and the two hours in which he attended the interview are here:

We go all over the place in these two hours, but I think it’s quite informative, much more information than was in the Fidonet episode.

While contacting some of the interviewees about this, I found out another had been battling cancer for a year, and is back to health.

I don’t think this is going to get easier.