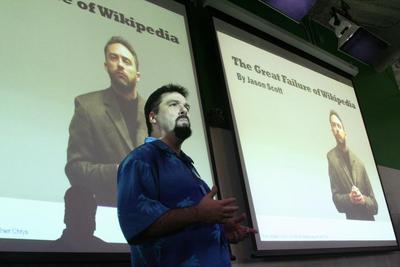 So, I spoke at Google.

This was one of my dreams, actually; to at least walk through Google at its heyday, to see the thing myself so I could remember what it was like in years to come. No entity, none, lasts forever in the state it is, and whether Google has peaked already or merely will be going through a bunch of Apple-like morphings remains to be seen. Either way, something big is there and I wanted to see it for myself.

To this end, a friend invited me on campus to speak about Wikipedia. Now, I’d made a little promise to myself that the next time I’d ever speak on stage about Wikipedia, Jimbo Wales would be on stage with me. But still, this was an opportunity too good to pass up. So I agreed, and gave a few paragraphs of text on what I’d speak about, and then continued doing interviews for GET LAMP. I cleared that particular Google Day of all interviews, though, just to be sure.

I signed a non-disclosure agreement and I’m going to honor it, so I won’t discuss the things I saw in anything but a general sense. But I will say that my expectations were exceeded as to how wonderful things were, both as a spectacle and as someone who has spent many hours studying and discussing corporate culture.

I spent time, as part of my dad’s desperate moves to be able to handle full visitation rights and keep a job, at the IBM TJ Watson Research Center in Westchester County, New York. This was, by most standards of a young boy, an amazing place. The curving architecture was out of this world, the hallways going for what seemed like infinity (I’d walk/run the length of them for fun) and insane machinery likely designed to pluck eyes from aliens scattered throughout. It was also where I met David Chess, albeit through a constricted tour no doubt forced upon him because my dad was a manager. But David was inspiring in his own way, with his great programming and cool office with a bunch of screens and magic going on. David’s example became a part of what I hoped to be. And did.

But all of the magic of the IBM research center pales to the now-revised life at a place like Google, still brimming with untold amounts of cash and a whole range of ideas about office life, architecture, activity and approach. It was as I’d dreamed it’d be, and that places like this exist on Earth and not just in dreams makes me happy. I’ve had actual, real dreams of working at a place like Google, going back many years before a Google existed.

There was a feeling in the halls, that’s hard to describe, but basically one of assured expectation. That is, a feeling that of course amazing things happen here, because this is a place where amazing things are expected to happen. It is a place where you are not fighting for resources in the same way that other places do. In some of my jobs, I have received blowback and horror at my request for a paper shredder. Not so at Google. My buddy RaD Man came with me to the presentation, and a person who’d once done art for RaD Man bumped into us in a lounge area. His reaction, and this gets to the heart of it, was not “Oh my goodness, my old buddy RaD Man is here”, but “Oh, hey, and today’s interesting thing of coolness was that RaD Man is here.” That is very precious, that feeling. It does not happen often.

Also, and this is a somewhat unusual but not disturbing feeling… I just don’t feel smart or driven enough to work there. I think I’d like working there, if I lived in California, but I can’t think of a single reason to hire me. I remember when they brought an original Google cluster to the vintage computer festival, partly as a recruiting tool, and I said to the guy there, “You ought to hire someone to archive history of the company.” He then took out his card, showing that he was, in fact, listed as a “Google Historian”. Oh well.

So I gave a talk on Wikipedia, which you’ve no doubt heard the content in various forms before, although I’ll post the speech itself in the future. I covered the usual items, but geared it for the Google audience. This mostly consisted of not getting hung up on criticisms of specific current choices in Wikipedia but instead how the environment it set up causes certain trends and issues which a place like Google, as it moves more into user-controlled content and presentation, needs to think about.

This talk was also unusual for me because I actually had something up on the screen. In this case, it was a series of cards with simple text headers on it. But you know, it totally fucked me up. My timing was affected by them, and I diagnosed, about halfway through, how to fix this for the next time I do such an approach. So maybe I’ll have more visual aids in the future, or maybe I’ll stick with my usual just-me technique, which has worked well so far.

Someone asked me what it was like, this place of Google and this was the best I could come up with:

“It’s like Mount Olympus having rough sex with a Rubik’s Cube factory and knocking over a Whole Foods Supermarket.”

Take from that what you will.