So, I’ve had this HVX-200 camera, this monstrosity that I and 50 really great people paid for, and perhaps it’s time to just give some overview/insight/thoughts on the thing, since I’ve been living with it through over 60 interviews of various types (as well as a lot of recreational/test footage and one music video).

A quip I occasionally give off when talking to people is that when I finished the BBS Documentary, I was absolutely delighted with it except for the sound and the video. In fact, this is mostly the case; the editing was solid, the subject matter solid, a bunch of really tough-to-film subjects got some halfway-decent coverage, and a lot of people who have only been words on a page or text on a screen to thousands got some rare glimpses into their voices and faces. So except for that sound and video thing…

Therefore, I resolved to fix both with the new film. I wanted a camera with on-body phantom power/XLR microphones (the previous camera had an expensive and badly-engineered hack to achieve XLR compatibility) and I knew I wanted to shoot in hi-def, be it HDV or something else.

I was going to go with a Sony HDV camera, but then I remembered I despise Sony and looked at a Panasonic instead. I was also, sort of, looking at a Canon HD camera, but that sucker was beyond expensive. So Panasonic was looking good to me, and the HVX-200, which was to be the big new Panasonic HD Prosumer camera, was just coming out.

Only problem is that it was six grand.

I’d never owned anything that was six grand that didn’t have a steering wheel or a mailbox out front, so that was just an enormous amount of money to invest. And as it was, with the help of the aforementioned Adventurer’s Club, I was able to afford the camera.

I should state that the camera requires accessories. Like, some really expensive accessories. First, it records on what are called P2 cards, which are plug-in cards that have SD inside them and which cost me about $600 apiece, and I needed two. Next, it is MUCH easier to use this camera if you bend over, paint your ass blue with a big arrow pointing at it, and buy the Panasonic AJ-PCS060G, which is a hard drive that accepts this P2 cards, and which cost, I am not kidding you, Sixteen Hundred Dollars. $1600. For a hard drive and a card reader. Man, that hurt.

All told, between all the accessories, I spent basically $9500 on the camera and all its attendant crap. That was an enormous amount of money even with the help. And that’s enough to drive most people away from spending money on a camera like that. This was part of why I started work on ARCADE immediately; sticker shock. It was like buying an expensive car and going “Well, I’m going to drive that bastard everywhere!”

So how is life under the camera?

When all the planets are in alignment, the shots are amazing. Check out some of these winners, all shot using the HVX and either one or two of my lights, plus ambient: 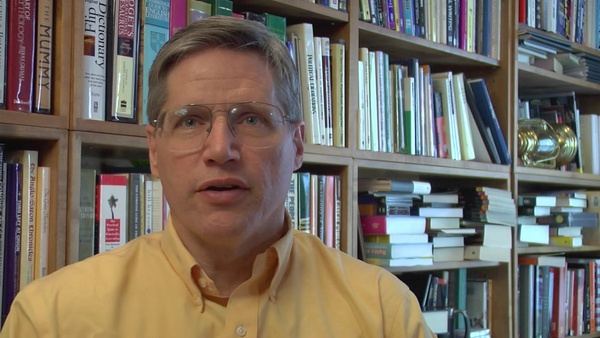 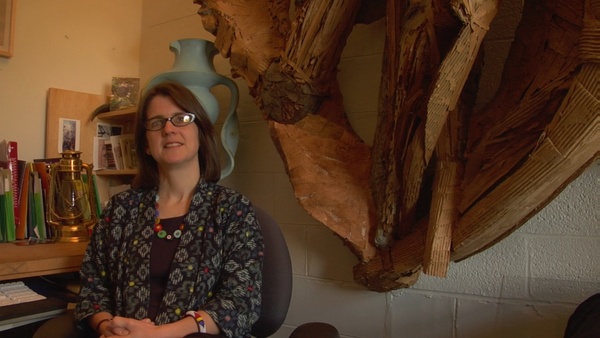 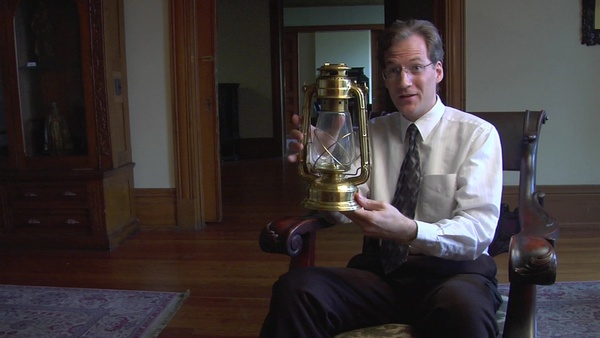 I occasionally have people go “good photos, now where’s the video” when they see these screengrabs. Now, for comparison, here’s one of my best shots from the BBS Documentary:

Unlike the previous shots, this is the full-resolution, exactly-as-it-appeared-on-screen screengrab, with no “larger” one for you to click on. So you can see the quantum leap in the resolution I have to work with.

That said, this camera (and the DV camera family in general) blows under low light. Really blows. And best of all, you might not know you’re working under low light. Several of my shots are severely low-lit and will have to have intense trickery and sleight of hand to look good (or, look like they’re supposed to look like “that”). This was a small percentage, because you can be damned sure I was quick on the draw to fix that crap ASAP when I saw it come out in final form. But still, it hurt me to interview someone cool, have it appear to look good on the LCD, and realize that it may be only their voice in the final movie.

But the voice will be really clean and clear. My interviews are recorded with sound a dozen times better than previously; the hacked equipment I had for the previous camera introduced a low-level hum that I had to filter out manually from all the clips, depending on how it functioned. As a result, people listening to my previous film, especially the blind, can hear that “something” is being done to the voices. While I’m sure I’ll be cleaning up sound on this one, it sounds a thousand times better.

Here’s a clip of raw audio from the BBS Documentary. And here’s a clip of raw audio from a GET LAMP interview. If you jam your speakers or headphones up, you can really hear the difference. Is the second one studio quality? Well, no, it’s not in a studio. But the sound in the background will be handled and not in a way that will make the people who have great ears freak out. So that’s a winner. Also, I am using the exact same microphone and cords in both.

Well, great. I fixed the sound and the video. But what blows?

Well, as mentioned earlier, low light freaks it out, and adds a bunch of noise. Actually, noise is everywhere on this camera. A lot of cameras based on chips can potentially introduce this sort of dotty noise all over the image, where if you look for it, it’s quite clearly there. I have software which will fix a little of this, but it’s a fact of life and I have to live with it. In another 5-10 years people won’t know we ever had this problem, but that’ll be a little while.

The controls on the side, when I put the camera in its bag, get clicked all around. I almost got screwed on this twice. It changes audio, video, and focus settings. So, every time I do a setup, I have to double-triple check all the settings on the camera to make sure it doesn’t suddenly autofocus or add video gain or any of a few other things that would suck if the shot was done that way. Booooo.

P2 cards, you either love or hate. I have to swap them out every 10 minutes. I own 4gb cards, which record 10 minutes, and Panasonic makes 8gb and 16gb cards, which give you 20 and 40 minutes. I prefer 4gb because I can do additional drop-dead backups on DVD-Rs and I don’t have to go for dual-layer. But during interviews, I have to be swapping a lot. It’s kind of weird, and likely some shots shake as a result. I try to time them for when I’m asking a question but life isn’t always that simple when you’re a one-man crew.

And finally, this camera seems to be doing nothing for making me look like anything but a freaky whack-job. I need a plug-in to fix this.

Am I glad I bought this camera? Yes. I made the right choice and the films I’m doing will look beautiful. Will editing be a pain? Yes, it is, but advances in assistive software have lessened the blow, even as I’m well past the terabyte mark in terms of raw data; likely I’m hitting two terabytes already, even with 25% of the footage shot for the BBS Documentary. I can handle it, but damn, this is a lot of data to track.

I think, however, past the weird cards and the weird switches and unusual settings and occasionally dark interviews, I got a real nice piece of work coming. Six grand was a lot, but that investment’s looking smarter and smarter every day. Or maybe I’m just getting dumber.