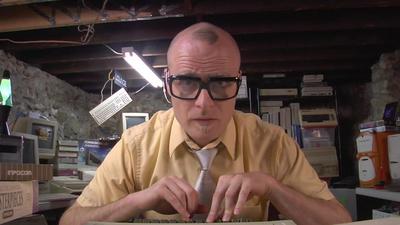 Principal shooting finished up last night for a side-project: a music video in support of a song on MC Frontalot’s new album, Secrets From the Future. For some segment of the population, the idea of the director of the BBS Documentary doing a music video with the head of the nerdcore hip-hip movement for a song about text adventures may actually blow some sort of gasket.

Yes, text adventures. On Secrets from the Future (which you can order here), there is a song called “It is Pitch Dark”, and it was written in support of the GET LAMP documentary. It is absolutely loaded over with reference to Infocom games, home computers, parsers, you name it. And it rocks.

I had two sets of friends help me with the production; one set of three (Charlie, Robin, Matt) came over on Monday and cleared out space in my basement. Charlie also made some great set suggestions that I implemented. On Tuesday, another set of three (Nick, Oliver and Fred) were crew and set photographers while I shot the video with Frontalot.

Shooting a music video, especially if you choose to do one with no on-set sound, is either wonderfully easy or stupidly difficult depending on how complicated you want things to be. From watching, oh, 69,105 music videos throughout my youth and later life, I’ve come up with several philosophies about what makes one good:

So, in my case, I sought out MC Frontalot’s performing strengths and worked out these strengths into a video. We shot for about three hours in the basement of my home in a set that will seem familiar to some folks who know me, although it was majorly tarted up for the video. Of course, we shot in high definition as well.

The set itself had lots of space for dancing, gesticulations, and odd angles. We did roughly 8 setups (moving and readjusting of cameras and lights), although in some cases I did major zoom so that it might as well have been another setup. We ran through the song with him lip-synching roughly 12 times. We ran through the song with no lipsynching probably another 6. I shot 70 minutes of footage.

There had been plans for a second night of shooting, but I canceled it. Frontalot’s performance is, to me, so extremely geeky and intense that I think shifting in a second-unit set of shots would just have diluted things. There was concern by some of the crew about this choice, but I think the choice is a good one, and Frontalot and I worked out another potential set of dates to shoot more footage if I turn out to be wrong.

The set is geeky; there’s so much equipment jammed into each shot that people will spend hours combing through them trying to determine what is what. Frontalot’s act includes lots of technical references, and the inclusion of such items as Apple Lisas, a 14.4k modem, a KOZMO.COM dropbox and a pile of 1982 IBM-PC manuals will hopefully do his first video proud.

I don’t know a release date for this yet, and there’s a lot of work for me to do in post-production, but I had a great time. Thanks to everyone who helped, and look for this in the future (and on the GET LAMP DVD, where it’ll be a bonus feature).

Oh, and I’d like to mention definitively: MC Frontalot is a really, really nice guy.