I try to keep my environs as clean and orderly as possible, partially because it makes me feel better, and partially because I like to fight the stereotype of a nerd trapped in endless boxes and papers, unable to keep track of anything, dying quietly behind one of the piles. It’s a good goal, in general.

However, the good and bad news is that I can’t do that at the moment. Now, as GET LAMP heats up, as the shipment of Apple II material is being sorted, as scanning has re-commenced, the “stuff” is winning once more. If you came into my office right now, you’d assume I ran a bookie operation or my startup had failed.

There’s already fruits of my labor, though! A nice scan of the original 1982 Castle Wolfenstein by Silas Warner (rest in peace) which in some ways is a vital link of the chain that started the First-Person Shooter genre. The documentation I scanned in even has a German-to-English dictionary so you can understand what the digitized voices are saying! (Although, generally, you should run like hell no matter what it is they’re saying.) 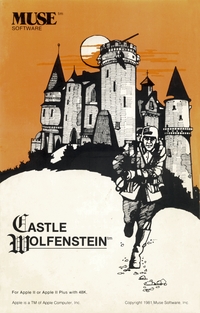 Not surprising, a lot of the Apple II disks I’m scanning have bad sectors or are dead. In a few of those cases, the bad sectors have long ago been avoided by the software on the Apple and I was able to rescue them anyway. Happily, I can report the acquisition of at least two dozen new textfiles circa 1982-1983! They’ll be on the main site shortly as well. (Just to explain how I get the data off, and then take the data and get the text out of it, I’ll just quickly link to Apple Disk Transfer, the AppleWin emulator, and Ciderpress).

Editing/culling continues for the movie, of course, with a bunch of interviews gone through and a bunch more scheduled for this summer. I suspect I’m going to spend a week on the West Coast, probably around the Penny Arcade expo, and go crazy traveling up and down the coast doing interviews. But not in a car with California plates!

The mess will probably last the rest of the year. It’s the mess of a busy workbench, not a neglected one. Let’s see what comes out of it.