What I think has impressed me the most over the years I’ve worked with computers are the times I’ve come to an expectation that a computer acts a “certain way”… and then along comes a programmer, hacker or tinkerer who proves that no, in fact you’re wrong and it doesn’t have to be that “certain way”.

One of these situations was floppy disk load times. Having come from cassette tapes, where it could literally be 20-30 minutes of load time before the program was ready to go, Floppy Disks were by far both superior and blindingly fast. But people are what they are, and it never takes that long for the mind to adapt to the increased speed and then find fault with it. In the case of disks, it could be anywhere from 15 to 30 seconds to load a program via floppy, depending on what was going by.

I didn’t own an Apple II at the time, but the Apple II was what the schools dealt in and that’s what the kids would trade programs in. If you were lucky, your school had kids who had access to programs/copies of disks outside of the district, and then you’d have even more cool stuff. It also gave whoever had these new programs the pride of showing off their latest wares. (Softwares. Wares. Warez. I’m sure you get the etymology of this by now.)

Again, the way that programs (especially commerical programs) being traded around “worked” is that you’d put the floppy disk into the drive, then power on the machine, and then let it “boot” into the program, taking about 15 seconds to do so, chugging away, and then it’d show a graphic splash screen and there we were. This was the “certain way” that floppy disks on the Apple II would boot.

However, that changed for me when I ran into “Beautiful Boot” by the Midwest Pirates’ Guild.

You never forget your first time, or more accurately you occasionally do forget your first time if it’s the first time encountering a file selection menu. But I remember mine clearly. I was in a computer classroom at school, and there was a movable cart with a large (regular) television serving as a monitor at the front of the room, and someone shoved in their latest “wares’ disk to show off what they had. They turned on the Apple II, and in one click of the disk drive, there it was: 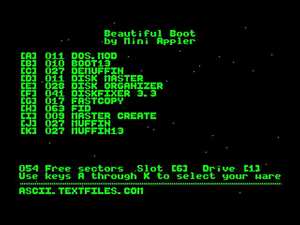 The screenshot shows several things clearly and a few things not as clearly. First of all, the font was great: instead of the basic Apple II font, this was an easy-to-read style that could been seen across the room. The selections were all right there, waiting for you to type in a letter instead of the commands BRUN STOLEN.PROGRAM.I.DOWNLOADED or RUN “CRAPPY BASIC PROGRAM”. And the minute you did, off they would go, chugging away quickly and your program would be up in no time.

Additionally, it had a soundtrack, albeit a simple one: plinky little dots of noise, not unlike the starfield that was scrolling in the background, which was also amazing to watch… all of this in one disk chug! How did this happen? It was basically magic.

This was a quantum leap from anything I’d seen before. I got a copy of the disk that had this menu on it, but it was years before I got my hands on the actual program to generate this menu. The documentation for Beautiful Boot is here in my archives, and you can see the excellent work done on this program’s instructions to make it easy to use. 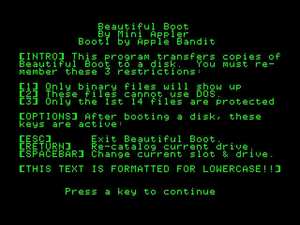 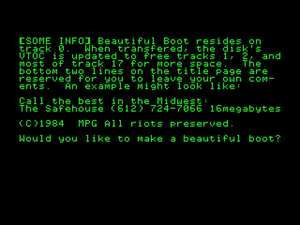 So, how did Beautiful Boot boot so quickly? Well, by simply working hard at the programming, of course: being on Track 0, it highly compressed the program that would do the actual menu, and had a very reduced version of AppleDOS that could fit in that track. One click, one read, one run. And so in doing this, they proved everything could be improved about the Apple Boot process.

I had the pleasure of meeting Mini Appler (and Sinbad Sailor) of the Midwest Pirate’s Guild as part of the BBS Documentary. When the opportunity came up to interview them, you can bet I was going to move heaven and earth to make such an interview happen. As it was, it only took a round-trip by car across Wisconsin to Minneapolis, Minnesota, a few extra hours on an insane trip that will always be thought of as the “Midwest Run”. (I went to 8 states in 10 days, driving thousands of miles and doing well over a dozen interviews).

Here’s the Mini Appler (get it? Minneapolis?) from one of the photographs I took during that interview.

What a great guy he was; photogenic, articulate, and with a good memory for the BBS days. Naturally we discussed Beautiful Boot, where he told me how he’d gotten the starfield routine from a Broderbund game of the same time (he’d lifted the assembly routines, then changed them from side-scrolling to vertical scrolling). It was great to finally, ultimately, thank him for blowing my mind a mere 20 years earlier.

This magical situation, where a well-written program does something that nobody previously thought was possible, has only happened to me a few times in my life (most recently would be the 8088 Corruption demo that Trixter did in 2004). When they happen, you have to treasure them, and they remind me how everything is possible, and cynicism gets me nothing but a slow load time.