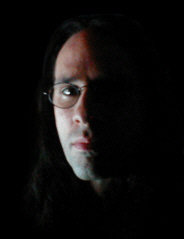 If you haven’t been following the accomplishments and style of Peter Hirschberg for the last decade or so, let me repair that major mistake immediately.

He is a true modern renaissance man, combining art, programming, and industrial design. His style is impeccable and pervades all his work, and at various times he has lit up my online life with his craft and creation. I have not had the pleasure of communicating with him or meeting him in person, and one day I hope to rectify that.

Hirschberg’s big effect on me is being inspiring in the realms of emulation, arcades, and style. Let’s cover them.

At some point I had considered doing some sort of book or similar project around Emulation, specifically Arcade Game Emulation, because the whole subject fascinates me. In point of fact the Arcade Documentary will be covering emulation and I have a number of interviews with emulation program authors sketched out or planned. Emulation as a concept and technique actually goes back many years, but the “mainstreaming” of arcade game emulation occured in the 1990s, with machines powerful enough to emulate arcade games from years before without stuttering or freaking out. It’s a little hard to believe that this would now be old history, but it’s getting on 10 years for some of the events. One of the facts that’s starting to get obscured is that before MAME (Multi Arcade Machine Emulator) basically flattened the market, there were a bunch of single-game or small-group-of-games emulators out there. A emulator might just do Dig Dug II, or Pac-Man, or a small collection of Midway games that happened to use the same chip. During this time, Hirschberg released a multi-game emulator called Vector Dream. The link I just gave has a lot of information about the program, but I’ll put out my own thoughts on top of them.

When emulator authors were putting out their works, they tended to focus on the basics. The programs would be command-line or have a simple enough GUI, and then you’d be playing the game. The cool part was that they worked, and worked quickly. This was quite sufficient for a first wave of “Holy Shit It Works” which is what was basically going on. at the time.

However, Vector Dream upped the bar. And by upped the bar I mean that our instruments were last able to track the bar going past Saturn before we lost contact with it. Where previous emulators had been comparing each other based on framerate/speed of the emulator and accuracy of the sound generation, Hirschberg’s Vector Dream attempted to give you control over aspects of the arcade experience you didn’t even know were a part of it. The vectors, previously quite happy in an emulator to be drawn accurately, could now be translucent. They could show a glow radius. The sound was accurate, but he added an optional mixed-in sound of the deflection coil. Of the power supply. When you dropped in a “quarter”, you heard it go in. You saw the start buttons blinking. Little things, you may say. Minor additions. But it was a level of craft not seen before.

Hirschberg maintained Vector Dream for a while, then pulled it down when he started working on the relatively-shortlived Retrocade” project, which was meant to be the be-all end-all of emulators. It was like a supergroup of emulator authors, and was an attempt to follow many of the credoes and ideas we’d seen in Vector Dreams. Like Vector Dream, Retrocade was stylish, accurate, and filling with nice touches. Both Vector Dream and Retrocade have backgrounds for the video games that used the “45 degree glass” trick to give black-and-white games some implied color. It had Hirschberg’s style all over it.

MAME, the current dominant arcade emulator, uses a lot of these ideas, and is very well maintained, adding new games or game variants every few weeks. It also utilizes digitzed sounds, backgrounds, and even scans of control panels and marquees to give you more of the flavor of the place they came from.

Peter Hirschberg, meanwhile, got quiet as far as fans like myself were concerned, but I always kept an eye out for him. A number of years back, he released the beautiful and stylish LEDHEAD, which simulates the old Mattel handheld LED games like Football, Baseball and the like. When I play these, I’m playing with this thing, I’m immediately transported back to hanging out at my dad’s house on visitation, playing LED football while resting against his shoulder as he watched TV. This was about the time that he was quite happy to have his kids around, and if that meant the son was going to be banging away at the dumb little piece of plastic, fine with him. I loved that thing, and this simulator captures it perfectly.

His other simulators will get your attention too, like Vertisim, which simulates a helicopter toy from the 70s, and Adventure: Revisited where he dragged Adventure kicking and screaming into the modern day. Just his description of the process is worth the price of admission.

Am I indicating how much I respect this fellow? I see his name, and I endorse the result immediately.

I was pleased, therefore, to find out that the arcade documentary “Chasing Ghosts” had Hirschberg on as a consultant and artist. This is the fellow you want on your team when you’re going for the extra mile, and all reports I have seen (I have not had the pleasure of seeing this film yet) indicate that the artwork and animation is impeccable. Additionally, there was a bonus to this, worth noting because it will fade very quickly into history.

You see, when you’re trying to get attention and attendance and possible buyers for your as-yet-unsigned film, you will often do a Dog and Pony show to attract all these potential folks. I don’t like that people have to do this, but I can certainly respect the quality of the Dog and Pony show, and the amount of effort some will put into them.

To that end, Hirschberg has put up an excellent scrapbook of the “Chasing Ghosts Arcade” which was created near the Sundance festival to attract people. In there, you had all sorts of classic machines, the design of said arcade being the result of Hirschberg’s skill, including a new poster and artwork referencing this “Arcade”.

As my friend Trixter commented, “But what happened to it?” And the answer is, of course, that it was all torn down and scattered to the four winds; that’s what you do with publicity stunts.

Outside his own home, Hirschberg has basically built his own arcade… filled with the games he owns, and having all those touches of craft and wonder I have come to expect from him over the last decade.

Tell me, when you see this photo, that you can tell it’s in someone’s home: 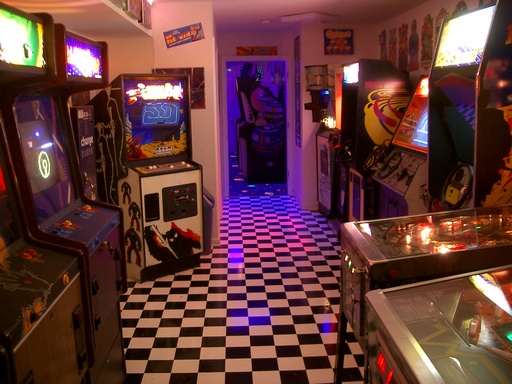 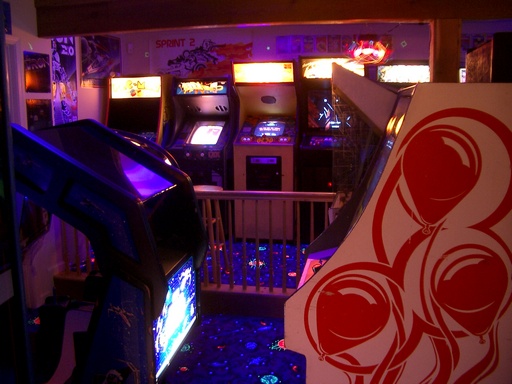 You can see what I mean by craft here. The galaxy rug, glowing under blacklight. The raised wooden railing separating some of the games. The checkerboard floor. The change machine, the little signs, the scattered arrangement. This is mastery.

Were the world filled with more Peter Hirschbergs, we’d be dumping all our money into medical research to ensure we lived to see all the great works they made.

Will he sit down for an interview for my own arcade documentary? Maybe.. I hope so. Maybe this year, maybe next year. But either way, he’s inspired me more than almost anyone to capture that feeling on film.