Summer camp was a requirement for me and my two siblings because the divorce settlement gave each parent a month with us and there was just no realistic way for my dad to take a month off of work to watch us. The first year of this, we were sent to a place called Surprise Lake Camp which was such an unmitigated disaster for me that it borders on cathartic even mentioning it, as one might idly mention the time they watched a pet killed before their eyes. While Surprise Lake is 105 years old and I am perfectly willing to say it had an off-year in my case, I’m sure it was me: the camp was mostly geared towards city kids and my father’s suburban home was 11 miles from the place. I got into fights, was the victim of insane, almost pathological pranks, and spent a lot of my time plotting horrible and nightmarish scenarios to either end my own life or a convenient, ever-shifting handful of nearby bullying maniacs. I often threatened to walk home and one of the counselors mentioned to me towards the end of my time there, “Holy Crap, you really could have done that.” I suppose I qualify as an “alumni” of the place but my attendance of any function there would end in fire. Lots and lots of fire.

My father reluctantly agreed with my preference to never go near that camp again and the next year, 1983, I instead went to Computer Tutor Summer Camp, in Williamstown Massachusetts. Every day I spent there made up for the entire punishing summer I’d spent at Surprise Lake the previous year.

Computer Tutor was one of that breed of Computer Camp that rose up in the 1980s, this freakish combination of outdoors activities and honing of programming skills that was often the result of a previously all-outdoors summer camp building a “lab” near the administration buildings and holding haphazard “classes” there. I choose Computer Tutor, although there were actually a whole selection that I found, including Old Acres Computer Camp in Indiana (which I’ve scanned the brouchure for) and the holy grail, the Atari Computer Camps at Club Med. This 1983 Time Magazine article gives a sense for the weird, almost opportunistic vibe these places give, looking back. Being 13 at the time and totally down with the wonders of computers, it made total sense that there’d be camps all over the country with computers at them. But it’s quite obvious that in many cases it was just a matter of strapping a “computer” theme to your busted-out camp with duct tape and then hanging up your new cyber-shingle.

Computer Tutor, however, was a little different. It was basically a summer program being held at Williamstown, Massachusetts, within the confines of a college: Williams College, to be exact. So no weiner roasts, no musty cabins, no hikes down to the latrines. When I was brought there by my dad, my suitcase brimming with clothes and books but very little technical gear, I was checked into a dormitory. Space was so huge that I didn’t even have a roommate. There were a total of about 20 of us, mostly boys but with a couple girls to balance things out. We didn’t have a mess hall; we ate at the college cafeteria. And let me diverge off into a segueway here: We were given meal plan cards.

Imaging being 13 years old and suddenly given not only your own room in a beautiful campus (and the campus was very beautiful, especially in summer), but given a little card that would allow you unlimited food forever while the magic Food Building was open. Anyone who knows and hangs out with me has seen how fast and how much I can eat if I don’t watch myself. I am quite positive this is where it came from: endless sodas, mountains of entres and desserts, side dishes by the truckload. To be thirteen years old and have a beautiful dorm room, unlimited meals, an environment of summer college sleepiness, and a requirement to play with computers each and every day… where’s the downside here?

I might as well drop in the picture I have of the 1983 group that was taken, likely as a promotion, but which I’ve cherished ever since: 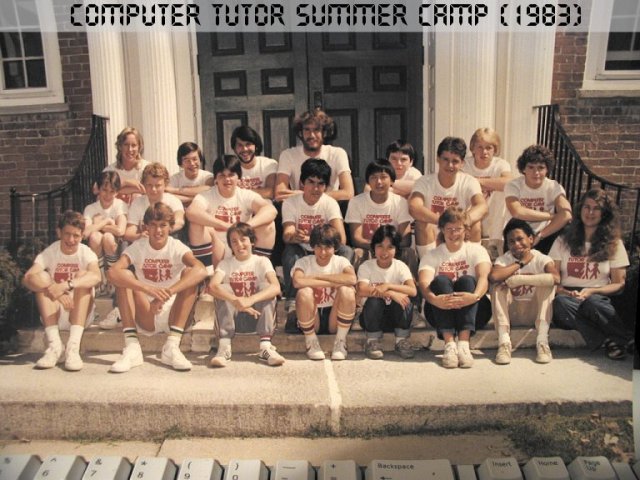 That’s me in the middle, second row, just under the guy with the beard and the afro. He and the fellow with the black beard to his right were the main counselors. There’s a counselor all the way to the right, and the rest are the kids of the camp. It’s nice to have mementos like this. The moral of this is take more photos. I look like the dictionary definition of “geek” and we’re all wearing the camp shirt but I’m one spectacularly happy motherfucker in this photo, even if I look like I’m scowling. Trust me.

The kids at Surprise Lake, besides being either bullies or indifferent ghosts, were also not blazingly smart, or hid smarts so they’d fit in. At Computer Tutor, they all were smart. I thought I was smart and then found out, watching the other kids in action, that I was actually the keeper of a sort of intelligence fog, a general sense of understanding things well but with no focus. There were two kids who would play chess games. During our occasional outings. In their heads. They’d call the moves out at each other and then keep walking around or hanging out, considering their next moves. This blew me away. Similarly, some of the kids were doing stuff on the computers that I just had no idea could be done. They’d use variable name conventions or graphics functions or whatever else they’d learned elsewhere and I was flat-footed. I realized I knew shit from shit and the only way I could have previously considered myself good at computers was because I was comparing myself to squirrels.

The town of Williamstown was rather small, and for a kid with very little in the way of money (why would I need it, after all?), there was very little to do. I remember when I found the local arcade, a hole in the wall affair that was gifted with a half-dozen machines, of which I can clearly remember Xevious and Tron. I spent some time there but not much at all, considering how much else there was to do.

I could fill the pages with memories of all those little things that happen at camp; the glances at girls, the solitary walks through new locations, the triumph of a learned phrase, the tears of laughter from an incredible joke or prank, the sorrow at a missed opportunity. I think anyone who’s been a youth and stayed over somewhere knows these things. I’ll confine myself to two memories, both related to computers.

The first is that piracy was rampant at camp. When the alpha counselor wasn’t around, the sub-counselors would let the kids whip out their pirated games collection and “warez trade” right in the lab. The alpha counselor had hurt her leg in some fashion and required a cane to get to the lab, so when she was in sight, there was plenty of time to stash away the disks and return to “normal” before she walked in. She didn’t walk over all that much. At the end of camp, she gave a very moving talk about the things we’d learned and she stressed the importance of ethics in using computers, of not pirating software and not taking advantage of others. I still remember the glances from the sub-counselors at us, almost as if to say Well, unless you really have to.

I didn’t have any floppy disks, so I couldn’t be a part of the copy parties, and when I went out to see if I could buy any, the place nearby wanted fifteen dollars for two floppies. And people ask me if I wish we could return to those times!

The second memory is more exact: the most popular game, by far, was The Bilestoad, which was a game for the Apple II created by “Mangrove Earthshoe”, and which featured a top-down view of two walking knight-like creatures who would slice and dice the living crap out of each other. This game was jaw-dropping. It had scrolling over a massive playing field, and when the two characters were not near each other, it would flip between them. I saw that game, at my young age, and I realized these crazy things could do anything if you tried hard enough. I never ever forgot that game, and even though I didn’t have an Apple II, I remember buying a copy of it in the store and keeping it in my collection, where it stays to this day.

“Mangrove Earthshoe” was the pseudonym of Marc Goodman. An excellent interview of Dr. Goodman is here. He mentions having never met someone who had official copy of the game. Maybe I’ll fix that.

Like I said, I have hundreds of memories from my two summers at Computer Tutor Summer Camp. By the time I was 15, I’d moved fully into running my own BBS and all sorts of other activities, and I didn’t go back. Possibly, there was no Computer Tutor camp to go back to… a lot of camps simply dried up and left when the home computer boom flattened out and you didn’t need to go “somewhere” to learn about computers. I’m glad I got my time with them, and the dorm living and eating totally changed how I looked at the world; I knew there were places out there that you could be your own person, respected as an individual, and trusted to take care of yourself. For some, 13 would be a little late to learn this, but it’s never too late to learn these lessons if you haven’t already.

Computer Camp… Life never was better for me than those two summers.