If you were lucky enough to have an RSS feed, you got to see a letter from a person criticizing me and questioning my psychological makeup based on my “Fuck Katie Hafner” entry. Quick research showed he was in the same faculty of a school as Hafner’s current husband, so there you go. I wrote him back, and he actually wrote a lovely, contrite response apologizing for his initial outburst and promising to find out what the heck I didn’t like about Hafner.

Don’t you love getting a story before the webmaster pulls it down? I do, and I have the .tar.gz and .zip files to prove it. And now some of you have one of mine! What a collector’s item.

Anyway, the core misunderstanding between me and the writer was that he’d found this decontextualized hate of Katie Hafner’s work, and went off since I looked completely Gonzo. A certain segment of the population will go “Oh, yeah, Mitnick and Cyberpunk” and of them, there’s some amount of drift because they didn’t, in fact, read Cyberpunk and are simply following the flow. In other words, there’s a lot of player hating and very little backup.

In 2001, I started working on a website about hacking, and misrepresentation in media and news. This went through a bunch of iterations, and it currently stands at hacker.textfiles.com. I never got around to linking it from the main site; I’ll fix that shortly.

Hacker is meant to be a definitive location for “the story” when it comes to the term, culture, and historical references. I have gotten along with it, but the problem is the whole bile/methodical ratio issue. Let me explain.

There is a section in the hacker sub-site called ERRATA. This is meant to put down, in a location easily referenced, a full set of corrections, clarifications and ridicule of books by and about hackers. The most galling part of a lot of books is they contain hyperbole, poor phrasing, and flat-out incorrect facts. It would be good if someone went through and catalogued the errors. That person, apparently, is me.

You have things that piss you off. You therefore gain bile. (Think of a little meter to the right of your vision, and it says “Bile” and it’s blinking red.) Now you’re angry, and you want to lash out. The problem is, bile doesn’t really go for the whole “measured response” thing. So you end up with a choice: lash out anyway (fuck yeah!) or hold off, get a grip, and then lay out the high road. But once you wait, the bile is gone, and the urge to take the high road is replaced with a general apathy. 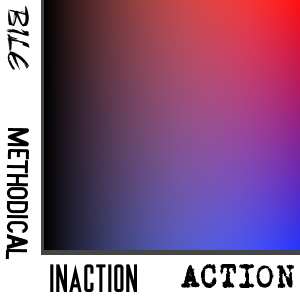 As you can clearly see, you run the risk of things being too blue (very methodical and with lots of detail, but boring) or red (you get your feeling across, but it makes you look insane) or black (you fade into the distance and are just another one-line “lol” message). What you want is for it to be purple. Oh, so very purple.

To properly work on the errata section, I have to go through an entire book, marking off potential factual or stylistic errors, and then research them, and then put up my corrections. This is the most boring thing you can imagine, but if you mess up, you miss important stuff. So it’s kind of like being an aircraft controller. But not.

Anyway, the thing is, there’s a lot of books out there that are absolutely horrible. An example is Confessions of Teenage Hackers by Dan Verton. I think this book is one of the worst you can stumble into; it flat-out exploits children, letting them weave their own hero-myths and portray themselves as a super-race of technological wizards, and it chokes every page with rampant hyperbole about the prowess and outcome of these myths. Additionally, it gets basic historical facts wrong: most notably, it takes the story of the 1990 AT&T Crash, where an internal software bug took out the phone system for a while and this triggered an ongoing FBI investigation into hackers, and turns it on its head. In his version, the hackers actually crashed the system. He even uses the phrase “crackdown on hackers”, an obvious reference to the book The Hacker Crackdown, which tells (that part of) the story accurately. An e-mail to Verton about this got a reply to “get a life”.

And that’s the fundamental problem; it really does take a while to fact-check and put it all out in some way for it to be easily readable. You know, like my chart.

The first book that’s gone under my knife is Hacker Culture by Douglas Thomas. I found a bunch of explicit errors, stylistic errors, and poor word choices. I feel a little bad he gets nailed first, because there’s others that are even more problematic, but you have to start somewhere!

When time permits, I’ll add more. And that brings us to the main question: why even do this at all?

Well, for the same reason I go bugfuck over Wikipedia architectural issues: people use these works for reference. The whole point of assembling ideas into non-fiction books is so that others don’t have to do that work. If you put out a book explaining how a sub-culture works, then it’s expected, to some amount, that what’s in there is accurate. Of course, there should always be multiple competing books when possible, but often the books use each other as reference. They’ll clearly say this in the back, of course, but that’s when you get to the end and that’s not always something a person will look up. So, for example, you have an enormous amount of sources that claim John Draper/Captian Crunch “discovered” the roughly-2600hz-blowing Captain Crunch Whistle. He didn’t. He did not. Let’s say this one more time: John Draper Did Not Discover That the Captain Crunch Whistle Included In Cereal Boxes Could Blow a Rough Approximation of 2600 Hertz. Draper is more explicit about this now, but he wasn’t always and let the “error” pass, and it’s everywhere. It’s reasonable for a lot of people to think this is the case because there’s a ton of “reference” out there saying so.

And so it goes: I want to vet and clean sources as best I can, check references, check up on facts, for the good of history. Otherwise, why bother learning all this at all?