When I was 17 and a senior in high school, we had to pose for yearbook pictures. Horace Greeley High School, where I attended, had a nice policy about the pictures, which was that the students could basically choose their backgrounds, poses, and the rest. Since I spent most of my time in my house, that’s where I had my photos taken, and beyond that, I had the photos taken in my computer room. A student named Rachel Lovinger was assigned my photo, and we took a bunch.

I lived a happy life for my years in Chappaqua, NY. I lived with my father in a 4 bedroom house, and I had run of the top floor, which became a kind of weird geek paradise, one I tried to live up to later when I bought my own home. I do remember, at the time, being very happy with the world I’d set up for myself. My bedroom had two parts to it, a computer lab and a bedroom/media area (the pictures you see here are from the computer lab) and I even had a remote monitor coming out of the computer into my media area, so I could watch the goings-on on my BBS while also watching TV or playing music. I have nothing but the fondest memories of my late teens, sans a small incident where I was thrown out of the house. 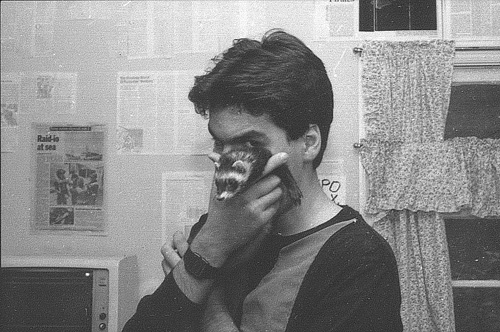 Unlike a lot of the “person in front of swirly background” photos that populate yearbooks, photos like the ones I had taken also document my room, and my earlier computer life before I went to college or ran textfiles.com or anything else. Of the 20 or so photos taken, we obviously only used one, but I was able to get a contact sheet from Rachel, which I kept, and which these photos came from. Obviously, they weren’t really meant for final publication, and look a lot worse than they could, but the information is there. 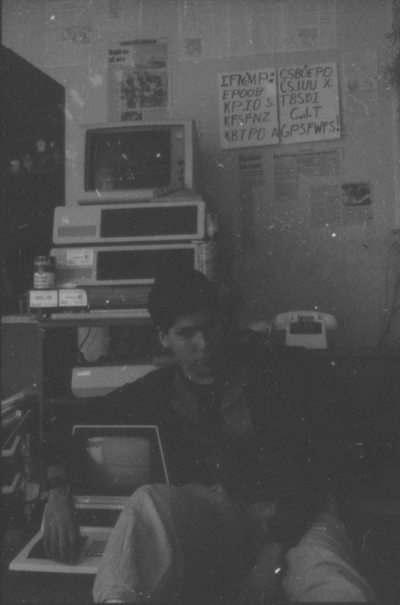 Obviously the second one is posed, with a Commodore PET computer lodged in front of my main system where it normally wouldn’t be. The rest of it is pretty accurate.

There’s so many little reminders in these photographs, I don’t know where to begin. That’s an IBM PC with an expansion chassis, making it look like a two-level monster. I ran The Works BBS on that for two years before leaving for college. It’s impossible to see in the photograph, but the Works BBS login screen is up. I can see business cards from BBSes that I used to call, taped on the desk. There’s a dot matrix printer there, which I printed out many messages and files from, which I kept (and still have) and which I’ve been slowly re-digitizing BACK into text. And the walls are completely covered in computer and BBS articles that I would pull from Microfiche at school, photocopy, and then tape up.

(Naturally, since all yearbook photos should have semi-secret messages, there’s those two pieces of paper with letters on them, with the simplest of one-letter shift ciphers on them, for others to find: “HELLO: DONNA, JOHN R., JEREMY, JASON B., BRANDON, BRITT W., SARAH – B.I.S. FOREVER!” By doing this in the photo, I didn’t have to put it into the paragraph in the yearbook. The B.I.S. did in fact end up being forever, since that’s the name of the production company for the documentaries.

If you’re a die-hard fan (I apparently have a few), you can feel free to download the entire contact sheet (700k) from the BBS Documentary site. I like the last one from the bottom, left side.

I’ve had a number of people send me photos like these posed near or using their computers, often taken by family members going “Here he is in his natural habitat, always in front of that computer.”

My advice is that if your family member does something all the time, take photos of them doing it, they’ll thank you years later, because everyone wants at least a little memory of the times before, and stuff they may not have thought about for decades will come rushing back. I know this because I get many dozens of letters a month telling me that’s what textfiles.com does. And thank goodness for that.