People often ask me if there’s a way they can help. I think I have something.

So, the Internet Archive has had a wild hit on its hand with the Hip Hop Mixtapes collection, which I’ve been culling from multiple sources and then shoving into the Archive’s drives through a series of increasingly complicated scripts. When I run my set of scripts, they do a good job of yanking the latest and greatest from a selection of sources, doing all the cleanup work, verifying the new mixtapes aren’t already in the collection, and then uploading them. From there, the Archive’s processes do the work, and then we have ourselves the latest tapes available to the world.

Since I see some of these tapes get thousands of listens within hours of being added, I know this is something people want. So, it’s a success all around. 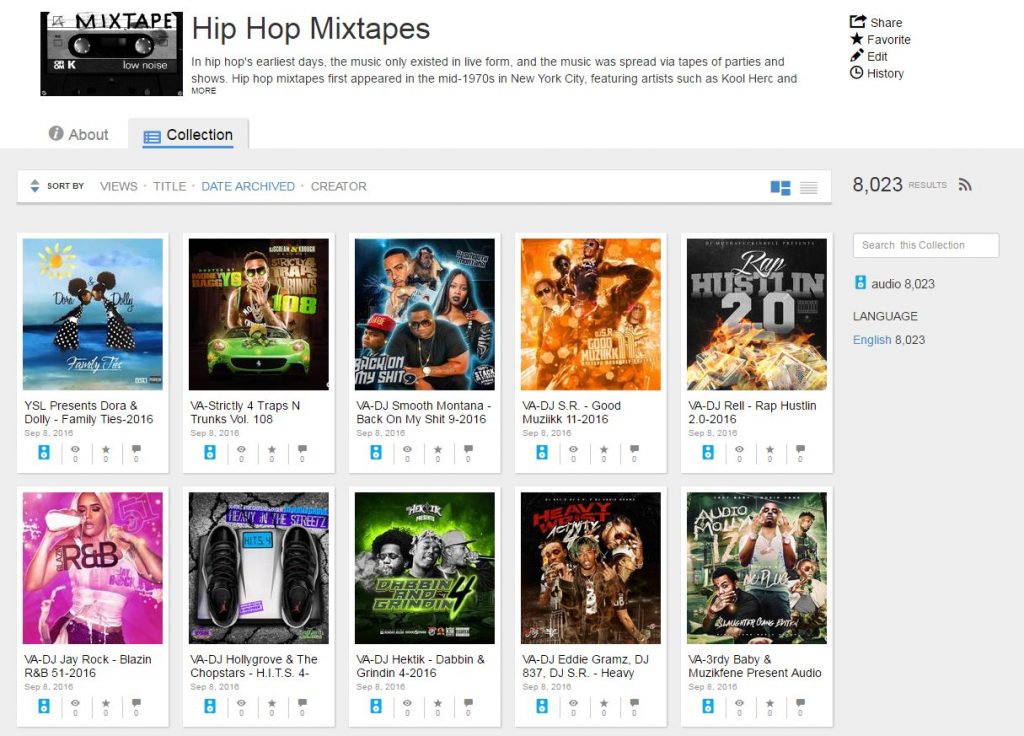 With success, of course, comes the two flipside factors: My own interest in seeing the collection improved and expanded, and the complaints from people who know about this subject finding shortcomings in every little thing.

There is a grand complaint that this collection currently focuses on mixtapes from 2000 onwards (and really, 2005 onwards). Guilty. That’s what’s easiest to find. Let’s set that one aside for a moment, as I’ve got several endeavors to improve that.

What I need help with is that there are a mass of mixtapes that quickly fell off the radar in terms of being easily downloadable and I need someone to spend time grabbing them for the collection.

While impressive, the 8,000 tapes up on the archive are actually the ones that were able to be grabbed by scripts, without any hangups, like the tapes falling out of favor or the sites they were offering going down. If you use the global list I have, the total amount of tapes could be as high as 20,000.

Again, it’s a shame that a lot of pre-2000 mixtapes haven’t yet fallen into my lap, but it’s really a shame that mixtapes that existed, were uploaded to the internet, and were readily available just a couple years ago, have faded down into obscurity. I’d like someone (or a coordinated group of someones) help grab those disparate and at-risk mixtapes to get into the collection.

I have information on all these missing tapes – the song titles, the artist information, and even information on mp3 size and what was in the original package. I’ve gone out there and tried to do this work, and I can do it, but it’s not a good use of my time – I have a lot of things I have to do and dedicating my efforts in this particular direction means a lot of other items will suffer.

So I’m reaching out to you. Hit me up at mixtapes@textfiles.com and help me build a set of people who are grabbing this body of work before it falls into darkness.